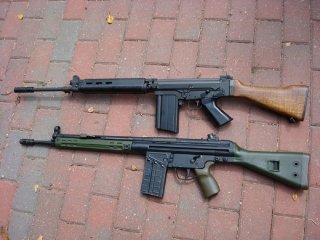 When Israel declared its independence as a sovereign state on May 14, 1948 it faced enemies on all fronts. A day later the forces of the Arab League, which included Egypt, Iraq, Lebanon, Syria and Transjordan, mobilized their sizable armies and invaded their smaller neighbor thus beginning the First Arab-Israeli War.

While nearly every one of the 600,000 Israelis now in their new homeland were ready to fight, one problem was that there wasn't really a single fighting force. The new government instead called upon members of the older independence groups, notably the Haganah ("The Defense") to help fend off the invasion. Needed as much as fighters were weapons, and in a strange twist of fate mass amounts of World War II surplus firearms from Nazi Germany were thus sent to help ensure the future of a Jewish state.

Following the Second World War Germany was defeated and more importantly disarmed. Much of the material, which include vast amounts of K98 Mauser rifles, Luger and P38 pistols, MG34 machine guns and other equipment was stockpiled in formerly occupied lands, notably Czechoslovakia.

And here is where the other odd twist of fate happened, Soviet dictator, Joseph Stalin provided the arms. Today it might seem odd that the Soviet Union would supply Israel with the weapons, given the close ties the country now has to the west, but it should be remembered that the Zionists who set up with communes in Palestine prior to World War II based these on the Soviet model.

Moreover, the western democracies had mixed feelings about the creation of Israel and Stalin took advantage of this and hoped to spread communism into the Middle East from a new Jewish state.

While he couldn't openly provide the weapons, in 1947 Stalin allowed the Jewish agency to begin purchasing large amounts of arms and ammunition. The weapons couldn't be of Soviet design or manufacture – but there were vast amounts of those captured German weapons in the Soviet's new client state of Czechoslovakia.

The deal was handled via "Operation Balak," which involved several purchases of arms handled by Ominpol via a shadowy government holding company. The initial sale included dozens MG34 machine guns, 4,500 K98 rifles and more than 50 million rounds of ammunition – all of which was smuggled in Palestine. An advantage of using the German rifles was the fact that the 7.92x57mm ammunition was produced by Czechoslovakia after the war and thus could still be supplied.

The K98, which was one of the most widely issued bolt action rifles of the war and was carried by German conquerors across Europe, became the main battle rifle of the fledgling Jewish state. When it turned out that additional rifles were needed by Israel after Stalin's support for Israel wavered, the new nation turned to the Belgian Fabrique Nationale (FN), which continued to manufacture new K98 rifles – along with other weapons for the Israelis.

After successfully winning its first war with its neighbors, Israel then began to develop its own arms industry, yet the K98s remained in use during the 1956 Suez Crisis, even as more modern weapons became available. Israel also maintained close ties with FN, and in 1955 it officially adopted the FN FAL and FALO rifles, while the K98 was relegated to training and seconding use until being removed from service only in the 1970s.