How to Improve America's Missile Defense: Be Like Sparta 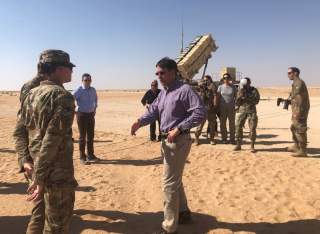 We are staring at a critical gap in our nation's missile defense. Although not everyone understands or even sees it, our adversaries' capabilities progress unabated. Next-generation threats are imminent, but our planned response is years away. How we address this in the interim is critical to our national security.

It was the Spartans and King Leonidas that responded when the Greeks were facing a gap in their security. King Leonidas is well known by historians, but for most of us, his accomplishments are buried in our DVD collection. The 2007 movie, 300, depicts King Leonidas and his Spartan warriors filling in the military gap between the Greek city-states and the massive Persian Army in 480 B.C.

Historically known as the Battle of Thermopylae, the movie dramatically depicts ripped Spartan warriors slashing back thousands of invading Persian warriors long enough for the remainder of Greece to rally their soldiers to eventually defeat the Persian armies. Although the film’s writers and producers take dramatic license, it is based on historical events of the Spartans filling the gap.

Like the call the Spartans responded to centuries ago, so too must we fill the gap to protect America without sacrificing our best. Over the last 20 years, our Missile Defense Agency (MDA) has effectively provided protection from intercontinental ballistic missiles (ICBMs) through the most sophisticated multilayered ballistic missile defense capabilities known to man. Now, next-generation foreign threats are creating near term vulnerability, the gap if you will, that challenges our defensive capabilities.

China has been outpacing our technical and defense capabilities through every means possible, including theft of intellectual property, industrial espionage, infiltrating our universities' research departments, as well as internal expenditures on research, development and testing. This increasing Chinese threat was forewarned by the Council on Foreign Relations just last September.

Russia meanwhile has reported significant growth in military capabilities, including aircraft, warships and submarines that may have the ability to carry ballistic missiles. Their supersonic intimidations cannot be ignored. The increasing resources that threaten our homeland are real

Though not as advanced, both Iranian and North Korean pursuits of ICBMs are undeterred as well.

North Korea’s Kim Jong Un announced last December that his country would introduce a “new strategic weapon” soon. Further, Kim has announced his intent to resume nuclear and missile testing regardless of past agreements. Most analysts believe it will be the next step towards nuclear ICBM capability.

Still stinging from the sudden elimination of Qasem Soleimani, Iran's leaders have vowed "severe revenge" for his death. Inadvertently, Iran displayed a glimpse of their missile capability following Soleimani's death when a Ukrainian Boeing 737-800 was shot down, leaving Tehran.  Further attacks included more than a dozen ballistic missiles fired at two Iraqi military bases injuring both Iraqi and U.S. troops. Most recently, Iran's fourth failed attempt to launch a satellite into earth orbit demonstrates their resolve for refining ICBM capability.

These emerging threats, combined with the individual ICBM capabilities of Russia and the resources of China, are dangers we cannot ignore. Instead, they must continue to invest in technologies to thwart their threats and capabilities.

The Pentagon planned for these developing threats through updates to the Ground-Based Interceptor (GBI), a key component of our homeland defense that strikes down incoming intercontinental ballistic missiles. In 2016, the Redesigned Kill Vehicle (RKV) was greenlit to counter near-term next-generation threats, but budget cuts, as well as other challenges, resulted in RKVs cancelation last year, leaving a gap in our defenses.

Recently, the Pentagon committed to developing the Next Generation Interceptor (NGI) to meet our increasing defense threats. NGI is much more than simply updating current capabilities. It is a new missile and a new warhead with the forward-thinking capabilities that will evolve with both enemy and American technologies. NGI will not be an active system until 2026, though, and likely not fully operational in the next decade.

Our nation can act like the Spartans and fill the gap in our missile defenses in the interim with available mid-course missile defense systems such as the Standard Missile–3 (SM-3) and the Aegis Ballistic Missile Defense systems. They excel at defeating short to intermediate-range missiles and are reliable, as evidenced by dozens of successful intercepts. Composed of both Aegis ships and Aegis Ashore, they can defend a multitude of combat theaters and provide deployable, sea-based defense where threats arise.

The president's budget prioritizes improving missile defense, and it is important Congress ensures those resources are split between short and long-term capabilities.  Near term threats exist, and waiting for NGI to address them is unacceptable. Filling the gap can and should be accomplished by increasing these important near-term resources to neutralize foreign threats and secure our national security.

Todd Tiahrt is a former Member of Congress who served on the House Appropriations Defense Subcommittee and the House Permanent Select Committee on Intelligence.

His article first appeared at RealClearDefense on February 28.