How Independents Won the Day in Lebanon’s Election 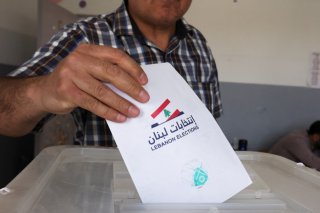 Despite fears that Lebanon’s latest election would not produce a significant change to the status quo, many Lebanese still believed in hope and demanded reform, and voted in independent candidates. At the time of writing, these individuals who ran on the promise of fighting establishment corruption and ineptitude won thirteen seats in the parliament, roughly 10 percent. They are expected to put the economic crisis at the forefront of their political agenda, which is what galvanized the support they received from the general population.

Their victory, alongside the increased seats of the right-wing Christian party, Lebanese Forces (LF), has knocked the Hezbollah-backed coalition out of the majority. The LF is now the largest Christian party in parliament, having won twenty-two seats, beating its rivals in the Free Patriotic Movement (FPM), which only won eighteen. The Christian-led FPM’s leader, Gebran Bassil, who is also the son-in-law of Lebanese president Michel Aoun, accused the United States and Israel of conspiring against him,

Hezbollah and its ally Amal (i.e., Hope) did manage to keep their twenty-seven seats reserved for the Shia religious sect; however, two independents seized seats within the Hezbollah stronghold of south Lebanon.

But even more shocking was the defeat of Druze politician Talal Arslan—a Hezbollah-aligned figure that represents one of Lebanon’s oldest political dynasties—who first became a member of parliament (MP) in 1992. Now Arslan is out of parliament, and his seat will be given to Mark Daou, an independent who is a proprietor of an advertising company and lecturer of media studies at the American University of Beirut. Daou belongs to the Taqaddom party. He is part of a twelve-member list of independents called, “United for Change” who wanted to prove that change in Lebanon is a possibility and that the current ruling class is not invincible. Another member of the list, Elias Jradi, had won an Orthodox Christian seat from Assad Hardan, the head of the pro-Hezbollah Syrian Socialist Nationalist Party.

As these new MPs make inroads, they are showing the Lebanese that change is possible.

In the capital of Beirut, for example, five out of its nineteen elected MPs were independents and fought hard to show the Lebanese people at home and abroad that cynicism will not triumph in this election. And despite their historical victories by the ballot box, some reformists have made allegations of sabotage by traditional parties. The Lebanese Association for Democratic Elections (LADE) reported its observers were forced to pull out from some polling areas once they received threats from supporters of establishment parties, including by Hezbollah and the Amal movement.

The LADE also claims to have documented 3,600 violations and untheatrical practices. “Flagrant violations, intimidation and pressures were made by several political parties,” LADE said, as it accused the Ministry of Interior of showing “laxity” in enforcing the law. For some in the newly elected opposition, Hezbollah was the center of their campaign struggle. For years, there had been growing discontent from the Lebanese population over worsening economic conditions. Prime Minister Najib Mikati called on the newly-elected MPs to not waste time on forming a new government. He talked about the need to put aside differences that can obstruct national priorities.

Hezbollah’s Secretary-General Sayyed Hassan Nasrallah conceded the results and called for “cooperation” with the divided parliament to form a government. He warned that the alternative would be “chaos and vacuum.” Lebanon has a history of political paralysis when rival factions cannot come to terms with each other which has left the country without a functioning government.

One example that could endanger Lebanon’s equilibrium of power and stability is the re-election of Nabi Berri as speaker of parliament. Berri is the leader of the Hezbollah-aligned Amal party and has held the post for thirty years, a period that included the Lebanese civil war. Some in this new opposition would prefer not to see the eighty-four-year-old Berri re-appointed for the role. Officially the third most powerful position in government, and reserved for the Shia sect, Berri has built a reputation for wielding great unofficial influence in and outside politics.

Critics have argued Berri’s continued presence in Lebanese politics is a quintessential example of why corruption persists and has little chance of real structural modernization. Markram Rabah, a historian and lecturer at the American University of Beirut, said that regardless of whether or not a party is for or against Hezbollah on the campaign trail, they all appeared to agree on voting for Berri afterward.

The heavyweights of the old guard are going to put up a fight against any legislation or action that threatens their hold on political power in Lebanon. Still, the independent candidates and LF have shown it is not inconceivable to overturn the establishment’s control over Lebanese politics. Now the question is: can these two blocs unite under a single governing strategy for Lebanon? Richard Kouyoumjian, an LF member and a former minister of social affairs, said he would like to see a “coalition of the brave,” between the LF and anyone who is ready to “respond to the people’s aspirations.” He went on to say his position is to work with those who carry the spirit of the 2019 revolution and who sincerely desire to build a real democratic state.

The strength of many independents came from the revolution, a non-sectarian phenomenon where people of all sects and religions in Lebanon came together to demand accountability from their politicians. Now, with some of the politicians themselves calling for change, they must decide on how to proceed in the following tempestuous months. There is some concern that Hezbollah and its allies could delay the formation of a new government as a retaliatory action for its parliamentary losses, but it remains to be seen if that will occur.

Laury Haytayan, a civil society activist and leader of the Taqaddom party, told CNBC that the people have spoken, and if Hezbollah wants to play that game, so be it. Regardless of the political establishment’s next move, Haytayan said, she is confident that the new parliament will block any law or resolution that is not in the interest of the Lebanese population.