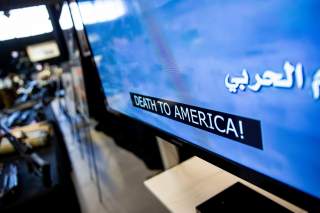 In 2015, Iran and Russia signed a military defense pact, underscoring a closer military relationship intended to counter U.S. influence in the Middle East.

It’s clear, some experts say, that Russia has also allied itself with Iran in the information war to paint the U.S. as a global aggressor.

Speaking to reporters in Jerusalem on June 25, Nikolai Patrushev, secretary of Russia’s Security Council and a close aide to Putin, said Russia had intelligence to prove the downed U.S. drone was flying in Iranian airspace.

Patrushev went on to dismiss U.S. intelligence proving that Iran was responsible for a recent series of attacks on oil tankers in the Middle East.

“Russia and Iran are closely aligned and work to enable and shield one another’s efforts. In this instance, the Kremlin has been front and center with a broader information campaign supporting the Iranian regime’s false narrative that Iran is the victim and not the aggressor,” said Bugayova, the Institute for the Study of War fellow.

The Kremlin said its 2014 seizure of Crimea and the ensuing conflict in the Donbas were both spurred by grassroots uprisings created and led by disaffected Russian-speaking Ukrainians who believed the new government in Kyiv was illegitimate—the product of a CIA-orchestrated putsch to install a fascist, neo-Nazi, pro-American government in Kyiv.

Moscow had planned its Donbas operation for years, and many pieces were already in place before Ukraine’s 2014 revolution. Consequently, in its early months, Russia’s hybrid offensive was on the march, leapfrogging across the Donbas, taking town after town.

At that time, Ukraine’s regular army was on its heels. Depleted by decades of corruption, it could only field about 6,000 combat-ready soldiers when the war began. So, to defend their homeland, everyday Ukrainians filled the ranks of irregular, civilian combat units and set out for the front lines.

It was a grassroots war effort—an example of a society that didn’t need to be prodded into a war by propaganda. Rather, Ukrainians of all stripes simply took up arms, often with little or no formal military training, and fought to defend their homeland.

Ultimately, this ragtag coalition of Ukraine’s regular and irregular forces stopped the combined Russian-separatist advance by using what the RAND Corp. described as “a siege warfare campaign, leveraging Ukraine’s vastly superior numbers, artillery, and air power to steadily encircle and push out the separatists from fortified terrain.”

By July 2014, just three months into the conflict, Ukrainian forces had retaken 23 out of the 36 districts previously under combined Russian-separatist control. Then in August 2014, with its hybrid operation in shambles, Russia outright invaded eastern Ukraine.

Ultimately, Ukraine sued for peace after the disastrous battle for Illovaisk, in which regular Russian units killed hundreds of Ukrainian troops.

The subsequent September 2014 cease-fire stopped the war from escalating further. A second cease-fire, known as Minsk II, was signed in February 2015.

Yet, from an operational perspective, Russia’s original hybrid warfare plan in the Donbas was a failure. In a 2017 study, the RAND Corp. concluded that in eastern Ukraine Russia “failed to achieve the leverage necessary without resorting to conventional war and outright invasion.”

“Ukraine is a case study not in pioneering new nonlinear approaches but in the failure of hybrid warfare to deliver the desired political ends for Russia,” note the study’s authors.

Today, the war in eastern Ukraine remains a limited, conventional conflict. It’s a static, trench war, in which the two camps take daily indirect-fire potshots at one another—and in which soldiers and civilians continue to die. More than 13,000 Ukrainians have so far died due to the conflict.

With Europe’s two largest standing land armies still exchanging daily fire along the trench lines in the Donbas, there’s always the chance of an unanticipated event—a so-called Franz Ferdinand scenario—setting off an escalatory domino chain that leads to a far deadlier cataclysm.

Case in point—a November 2018 naval clash between Russia and Ukraine in the Black Sea nearly precipitated a bigger war.

Outside the Donbas war zone, Russia continues to use hybrid war tactics across all of Ukraine. Consequently, there’s hardly any part of Ukrainian life that hasn’t been affected.

For years Ukrainian soldiers have reported receiving threats and demands for their surrender from their Russian enemies over cellphone text messages.

The concept of “escalation dominance” was a key tenet of NATO’s nuclear deterrence strategy against the Soviet Union. In theory, U.S. military superiority would inherently deter the Soviet Union from going to war.

The problem with the concept of escalation dominance, however, is that American public opinion could turn against a conflict well before the military has fully tapped its capacity for inflicting violence.

Without public support, America’s material advantages aren’t enough to compel an adversary to give up without a fight.

Public opinion is “generally a weakness of any democracy,” said Vasyl Myroshnychenko, director of the Kyiv-based Ukraine Crisis Media Center. “And once an adverse power learns how to affect public opinion, it has the upper hand,” Myroshnychenko said.

Yet, hybrid warfare is not a one-size-fits-all formula. Rather, the Kremlin tailors its hybrid warfare tactics according to each adversary’s weaknesses.

“Russia’s gray zone tactics are most effective when the target is deeply polarized or lacks the capacity to resist and respond effectively to Russian aggression,” writes Czerewko of the Joint Staff in the recent Pentagon study on Russia.

Gray zone activities aren’t necessarily anything new, either, in terms of the history of warfare. Although it is significant to note, many experts say, that hybrid warfare is becoming the go-to strategy for America’s up and coming crop of adversaries.

For authoritarian regimes like those in Russia, Iran, and China—which lean on nationalism to retain their hold on power—hybrid warfare tactics offer a way to ceremonially push back against America for domestic consumption while tiptoeing around a conventional war.

“Antics like those we’ve seen from Iran in recent weeks, and which we continue to see from Russia and China, are those of weak governments eager to demonstrate their international importance and by extension bolster their domestic legitimacy,” said Gadzala, the Atlantic Council fellow.

In some respects, the old paradigms of the justice of war—which include time-honored metrics, such as the proportionality of the use of deadly force—are being challenged in this era of hybrid warfare.

For instance, at what point does a cyberattack merit a lethal military response? Or, is it ethically defensible to launch lethal airstrikes in retaliation for an attack on a surveillance drone?

Compounding these ethical dilemmas, hybrid warfare is inherently designed to create battlefield confusion, primarily in the command and control process, clouding the situational awareness of both personnel in combat and their commanders controlling the war effort from afar. For Western militaries, which prefer precision strikes with minimum risk of collateral damage, that kind of confusion can be paralyzing.

However, Russian and Iranian leaders are playing with fire, experts warn.

In practice, the utility of hybrid warfare hinges on a country’s ability to accurately judge an adversary’s tolerance for gray zone provocations. That’s not necessarily easy to do—especially since the U.S. and its allies have not yet created their own rules on when nonlethal gray zone activities merit a lethal military response.

“The discrepancy between the Russian and the U.S. understanding of ‘conflict’ and ‘war’ will continue to grow, leading to a higher risk of escalation in future situations involving both nations,” notes the Pentagon study.

“It is imperative that the U.S. establishes a consensus definition of ‘gray zone’ and reevaluates old paradigms defining war and peace, as we enter a new era of international politics which is defined by shades of gray,” the study continued.

In its attack on the U.S. drone, Iran misread Trump’s red line and the two countries went to the absolute brink of war. For its part, Moscow’s gross misjudgment of Ukrainians’ resolve to fight in 2014 proved to be a fatal error for Russia’s hybrid war plan in the Donbas.

The stakes couldn’t be higher, analysts say. If Russia, purposefully or not, oversteps America’s red line for tolerating gray zone aggression—it could spark a nuclear war. And Iran’s brinkmanship campaign against U.S. interests in the Middle East is hovering on the razor’s edge of igniting a regional war.