How Iran Went to War Using an F-14 Tomcat (Yes, the Fighter in Top Gun) 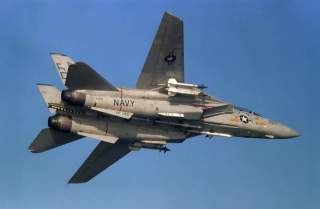 For much of the last 30 years, there was one air-to-air missile that captivated professionals and enthusiasts alike — the big, expensive Hughes AIM-54 Phoenix. The long-range armament of the Grumman F-14 Tomcat.

It’s generally accepted that the famed missile was only ever used in anger twice — in 1999 over Iraq, toward the end of its active service with the U.S. Navy. Although Iran is known to have purchased AIM-54s together with a fleet of F-14s in the mid-1970s, legend has it that Iranians never used any Phoenixes in combat.

As is so often the case, the actual story is entirely different — and remains largely unknown to the Western public.

In late 1973, Iran — then ruled by Shah Mohammad Reza Pahlavi, a close ally of the USA — placed the first of two orders for a total of 80 F-14s and 714 Phoenixes. The first two Tomcats were delivered in January 1976, and all the others followed over the next two years, together with about 240 Phoenixes.

By early 1979, around 120 Iranian pilots and slightly fewer than 100 radar-intercept officers, or RIOs, had completed their training on F-14s. Then the so-called “Islamic Revolution” swept the Shah from power.

The air force — officially re-designated the Islamic Republic of Iran Air Force ever since — was essentially grounded for months. This changed in August 1980, as tensions increased with Iraq.

“We had started to check the F-14 pilots who had not flown in any sort of capacity for over 18 months back into service once again,” recalled Maj. Gen. Mohammed-Reza Ataayee, a retired IRIAF F-14-pilot. “We also brought back a number of ground technical crews into service, so we could bring back a number of grounded F-14s into combat ready status after a long layoff.”

The technical staff started to get the Tomcats ready and we checked a number of pilots and they started their combat duties … flying [combat air patrols] along the border with Iraq.

Initially, the conflict was limited to cross-border skirmishes. Iraq would bomb our border guards and vice versa, and when our F-4s went for cross-border sorties, we usually provided top cover for them and that’s how we in the end we provided refresher training for the majority of our F-14 pilots.

On Sept. 8, 1980, the IRIAF was ordered to launch its F-4E Phantom IIs for attacks on Iraqi tanks and artillery attacking Iranian border posts. One Phantom was shot down by Iraqi ground defenses. The crew ejected inside Iraq and evaded several parties sent to capture it, but was not recovered by Iranians until several days later.

Concerned by the sudden activity of the IRIAF, the Iraqi chief of staff orderd the Iraqi air force to conduct reconnaissance sorties deep inside Iran in order to find out if the Iranian army was preparing for a war. The recon planes included MiG-21Rs of No. 70 Squadron based at Rashid air base in Baghdad and also Su-22s from No. 44 Squadron at Firas air base in Mosul.

The Islamic Revolution of 1979 left the IRIAF in possession of an incomplete network of early-warning radar stations. Furthermore, a number of Iranian defectors revealed secrets of this system to Baghdad in mid-1980. Therefore, Iraqi aircraft were able to fly deep into Iranian airspace entirely unobserved.

On Sept. 9, 1980, it was Ataayee’s turn to fly top cover for another formation of F-4Es that targeted the Iraqi army’s positions near the border. “My back-seater was 1st Lt. Sultan Pasha-Pour. Back then, I was a major and the second Tomcat was piloted by Maj. Shahram Rostami … The ground radar announced to us one target that was approaching the border and closing fast, and asked us if it is possible for us to engage it.”

“At the time the government had given us strict orders to never stray over the border or engage in cross-border combats, in order to give Saddam Hussein no excuse for an invasion. We were to engage only if they violated our airspace. Then we had the right to engage and destroy them."

I told my RIO Pasha-Pour to launch a missile at this target. After a quick pause I repeated my order. He told me to do it. I told him to do it. Finally, he pushed the button.

The IRIAF officially credited Ataayee with a kill of the Sukhoi Su-20M flown by pilot named Faysal Abdul-Fattah Abdul Rahman. This conclusion has been confirmed by captured Iraqi documents.

Indeed, none of the Su-20s were operational for most of September 1980, according to an Iraqi air force document entitled “Engine-Related Problems with Su-20s, 4 September — 24 October 1980” and dated May 29, 1981. The entire fleet had developed engine-related problems and was grounded pending investigation by a team of Soviet experts.

Finally, no available Iraqi documentation shows a loss on Sept. 9, 1980. According to “Analytical Study of Iraqi Aircraft Attrition During the Iran-Iraq War,” prepared by the Iraqi air force’s intelligence directorate in 1992, the first Iraqi loss in the war with Iran was an Su-22 flown by No. 44 squadron commander Maj. Noubar Abdel-Hamid Al Hamadani, shot down on Sept. 14, 1980.

Hamadani had led a pair of Sukhois on a visual reconnaissance sortie inside Iranian airspace. The wingman later reported he came under small-arms fire, but nothing happened initially. A minute later, Hamadani’s aircraft “just blew up” without any warning. The pilot was declared missing in action and was never heard from again.

Despite multiple Iranian claims, the only other aircraft the Iraqi air force confirmed as lost during the weeks of border skirmishing with Iran in September 1980 was a MiG-21R from No. 70 Squadron flown by 1st Lt. Jassim Dayekh. The date and circumstances of this loss remain unknown, while the area over which he was shot down is described as “north of Abadan.”

While the IRIAF F-14 crew certainly had good reason to claim its first kill on Sept. 9, 1980, currently it remains unknown if Ataayee and Pasha-Pour really scored the first-ever kill by an AIM-54. It’s possible that this honor belongs to 1st Lt. Fereydoon-Ali Mazandarani and 1st Lt. Qassem Soltani, who claimed to have shot down a MiG-23 with an AIM-54 on Sept. 17, 1980.

This much is certain — the IRIAF’s F-14s were not only operational, but began using their Phoenix missiles in combat days before Iraq invaded Iran on Sept. 22, 1980.

This article by Tom Cooper originally appeared at War is Boring in 2017.