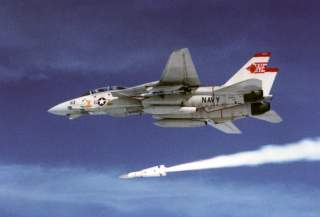 The U.S. Navy’s AIM-54 Phoenix, the exclusive long-range weapon of the F-14 Tomcat fighter, is one of the most powerful air-to-air missiles every to exist.

Thirteen feet long and weighing 1,000 pounds, the rocket-propelled, radar-guided AIM-54 flew at Mach five as high as 80,000 feet while carrying a devastating, 135-pound warhead over a range of more than 100 miles.

But in more than 30 years of U.S. service ending with the type’s retirement from Navy service in the mid-2000s, American Tomcats fired just three AIM-54s in anger. All in 1999 while targeting Iraqi aircraft violating a U.N. no-fly zone.

None of those Phoenixes struck their targets.

The only country successfully to wield the AIM-54 in combat has been Iran, which in the early 1970s acquired 79 F-14s and hundreds of Phoenixes from the United States.

Iranian Tomcats fired many AIM-54s at Iraqi planes during the eight-year Iran-Iraq war that began on Sept. 22, 1980. But it’s possible the first Iranian Phoenix kill actually took place before full-scale fighting broke out.

In the fall of 1980, as tensions escalated, Iranian jets flew limited strikes on Iraqi forces just across the border opposite Iran. F-14s flew top cover.

According to aviation historian Tom Cooper, on Sept. 9, 1980, Iranian Tomcat pilot Mohammed-Reza Ataayee and a wingman were protecting a formation of F-4Es bombing Iraqi positions near the border. “My back-seater was 1st Lt. Sultan Pasha-Pour,” Ataayee told Cooper.

Back then, I was a major and the second Tomcat was piloted by Maj. Shahram Rostami … The ground radar announced to us one target that was approaching the border and closing fast, and asked us if it is possible for us to engage it.

At the time the government had given us strict orders to never stray over the border or engage in cross-border combats, in order to give Saddam Hussein no excuse for an invasion. We were to engage only if they violated our airspace. Then we had the right to engage and destroy them.

I told my [back-seat radar-intercept officer] Pasha-Pour to launch a missile at this target. After a quick pause I repeated my order. He told me to do it. I told him to do it. Finally, he pushed the button.

According to one Iraqi government study that Cooper cited, the first Iraqi loss in the conflict with Iran was an Su-22 flown by No. 44 squadron commander Maj. Noubar Abdel-Hamid Al Hamadani, shot down on Sept. 14, 1980.

“While the [Iranian] F-14 crew certainly had good reason to claim its first kill on Sept. 9, 1980, currently it remains unknown if Ataayee and Pasha-Pour really scored the first-ever kill by an AIM-54,” Cooper wrote.