How ISIS Is Violently Expanding Across Africa 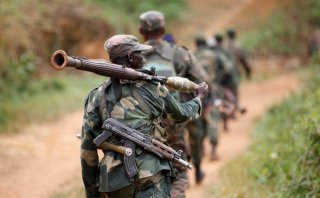 At least 100 people have been killed in the ongoing prison battle between the U.S.-backed Syrian Democratic Forces (SDF) and Islamic State (ISIS) fighters in northeastern Syria. In a well-coordinated attack, ISIS fighters bombarded Gweiran prison in Al-Hasakah on Thursday, attempting to free the thousands of ISIS detainees held there. This complex attack involving suicide bombers, prison rioters, and sleeper cells is ISIS’ most significant escalation since its “caliphate” was defeated in 2019.

Within twenty-four hours of the onset of the prison attack in Syria, ISIS militants killed eleven Iraqi soldiers in an army base in Diyala across the border. Although the severity and timing of these two cross-border attacks is alarming, an uptick in ISIS-directed offensives throughout Africa in recent months indicates the resurgence of terrorism is not limited to territories previously ruled by the organization. ISIS’s apparent shift towards Africa should be met with adjusted counterterrorism measures that focus on the group’s expansionist campaign.

While ISIS’ rampage in the Middle East draws attention, reports of parallel offensives in Africa largely go under the radar. In the latest U.S. State Department report on terrorism, released this month, ISIS activity was deemed a “persistent and pervasive threat worldwide.” The report elaborated that ISIS affiliates present outside of Iraq and Syria contributed to more fatalities in 2020 than in any other year. The terror group’s newest affiliate, the Islamic State Central Africa Province (ISCAP), conducted attacks across Africa, including the Democratic Republic of Congo (DRC), Tanzania, and Mozambique. In 2021, ISCAP claimed responsibility for 166 attacks that killed over 600 people. ISIS-directed attacks in Africa continue to rise, indicating the group’s prioritization of gaining a foothold outside of Iraq and Syria.

Additionally, ISIS has begun to launch attacks in Uganda, a major player in the anti-Islamist campaign within Africa. Uganda single handedly supplies the most troops to the African Union peacekeeping mission in Somalia, which exists to counter ISIS-affiliate Al-Shabab. In recent months, the surge of ISIS attacks in Uganda suggest the terror group is attempting to stamp out its toughest resistance on the continent. In October 2021, ISIS carried out its first attacks in Uganda, bombing a pub frequented by government officials and a public bus. One month later, ISIS claimed responsibility for two nearly simultaneous suicide bombings in Uganda’s capital, killing three and injuring dozens. All three attacks were perpetuated by ISCAP, which is recognized locally as the Allied Democratic Forces (ADF).

The ADF was created in the mid-1990s as a militant Islamist movement that relied on guerilla warfare in the eastern DRC for more than twenty years. The group was largely idle until 2017, when ISIS financiers began to fund the group’s terror activity. By 2019, ISIS declared ADF as its official affiliate, providing the group with technical training and more funding. ISIS’ modus operandi—securing and metamorphosing pre-existing militant groups to serve as conduits for terror—has proven to be a successful strategy in Africa.

In 2022, ISIS will likely launch even more attacks throughout Africa, attracting new recruits and propaganda opportunities along the way. Today, ISIS controls less than 1 percent of African territory. However, without a more effective counterterrorism strategy that recognizes the organization’s new African frontier, ISIS is bound to gain a stronger foothold on the continent.