How to Land an F-4 Phantom That’s On Fire 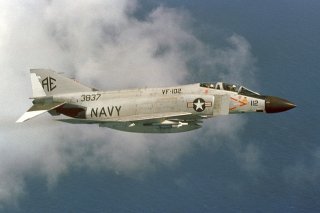 E. Royce Williams, Jr. is one of the true legends of the U.S. Navy. In 1952, during the Korean War, Williams engaged in one of the longest dogfights in history.

"After more than 30 minutes of aerial combat in which Williams burned the skin on his neck from snapping his head back and forth to catch sight of the enemy, Williams shot down three more of the Soviet fighters, for a total of four kills,” South Dakota Public Broadcasting reported last year. “He escaped one of the last two MiGs by making a 30-degree dive into a snowstorm cloud. His aircraft received 263 bullet holes and perforations. He barely made it back to his carrier."

As reported by Aviation Geek Club this week, Williams one experienced a terrifying in-flight emergency while flying the F-4 Phantom II.

“While engaging in combat maneuvers, both engines suddenly shut down. When Williams attempted to get an air start, one engine caught fire while the other refused to start,” the Geek Club reported, citing Thomas McKelvey Cleaver’s book The Tonkin Gulf Yacht Club.

“With the burning engine producing only idle power, Williams was able to stay in the air by lighting off the afterburner of the flaming J79! Determined to try to bring the plane back to Miramar, he ordered his radar intercept officer (RIO) to eject, but the order was refused. Williams was able to land the burning Phantom on the main Miramar runway, shutting down as soon as the wheels touched ground. Firefighters were able to extinguish the blaze before the airplane exploded.”

Later investigation by authorities determined what had gone wrong.

“Post-accident analysis revealed a design anomaly in the curvature of the intake duct, which at higher angles of attack than had been achieved in initial tests resulted in air starvation to the engines. McDonnell was able to fix the problem and the Phantom program was saved,” the report said.

His 1952 dogfight with the MiGs remained a secret for nearly a half-century.

"No, I was told not to talk about it and I just accepted it. Matter of fact, other things came along and since it wasn’t going to be mentioned I more or less put it out of my mind,” Williams told South Dakota Public Broadcasting last year, of the shooting down of the Soviet MiGs.

Last December Williams, then ninety-five years old, was honored with the Medal of Valor, by the Encinitas Legion Post in California. The same group, along with lawmakers, are campaigning for Williams to receive the Medal of Honor while he’s still living.