How The Legacy of Aaron Burr Still Runs The U.S. Senate Today 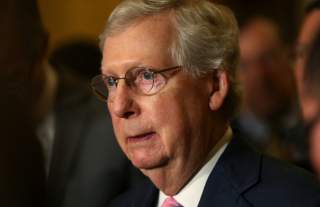 Senate Majority Leader Mitch McConnell (R-KY), perhaps fearing a future with his party in the minority, published an op-ed in The New York Times on Thursday that offers his best defense of the filibuster — the process that allows a minority of senators to veto legislation unless the bill is supported by a 60-vote supermajority.

McConnell’s defense of the filibuster is understandable. Nations with fewer veto points — that is, fewer opportunities for opponents of legislation to block it — tend to have larger, more robust welfare states. So keeping the filibuster will help preserve Republican policies even when the GOP loses elections.

Similarly, the Republican Party’s dominance of the Supreme Court allows it to shape policy on issues ranging from voting rights to health care to the workplace, without actually needing to enact legislation. If Congress were able to legislate, by contrast, it could overrule many Supreme Court decisions and shift power from Republican judges to the American people.

The core of McConnell’s argument is that even though the filibuster is not mentioned in the Constitution, it’s actually a core part of our constitutional system:

[T]he Senate’s treasured tradition is not efficiency but deliberation. One of the body’s central purposes is making new laws earn broader support than what is required for a bare majority in the House. The legislative filibuster does not appear in the Constitution’s text, but it is central to the order the Constitution sets forth. It echoes James Madison’s explanation in Federalist 62 that the Senate is designed not to rubber-stamp House bills but to act as an “additional impediment” and “complicated check” on “improper acts of legislation.” It embodies Thomas Jefferson’s principle that “great innovations should not be forced on slender majorities.”

The legislative filibuster is directly downstream from our founding tradition. If that tradition frustrates the whims of those on the far left, it is their half-baked proposals and not the centuries-old wisdom that need retooling.

McConnell’s notion that the filibuster is rooted in some grand tradition is simply wrong. The filibuster is not part of some great constitutional design handed down by two of McConnell’s favorite dead slaveholders. It is a historical accident, brought about by one of the early republic’s most notorious figures. And it is an accident that went largely unnoticed for decades after its creation.

Shortly after Vice President Aaron Burr was indicted for killing Alexander Hamilton, Burr returned to the Senate as its presiding officer. There, as a lame duck, he led a process that was supposed to remove duplicative procedures from the Senate’s rules. Burr convinced senators to eliminate a process called the “previous question motion.”

Burr, however, was wrong about this motion. The previous question motion wasn’t some parliamentary irrelevancy, it was the process that allowed senators to cut off debate on a topic when a minority wanted to keep that debate going. Without it, a minority could put off a vote forever by forcing the Senate to continue “debating” a subject until the majority gave up.

Though the Senate made this change in 1806, no one seemed to realize the significance until 1837, when, as Matt Yglesias explained in The Atlantic, “a minority block of Whig senators prolonged debate to prevent Andrew Jackson’s allies from expunging a resolution of censure against him.”

Since then, the Senate reformed the filibuster several times to make it harder for a minority to block progress. In 1917, the Senate allowed a two-thirds supermajority to break a filibuster. That threshold was eventually lowered to 60, and then to 51 for confirmation votes.

But the filibuster is not in any way part of America’s grand constitutional design. It’s a relic of a mistake made by a lame-duck assassin.

This article originally appeared on ThinkProgress on August 22, 2019.

Ian Millhiser is a columnist for ThinkProgress.