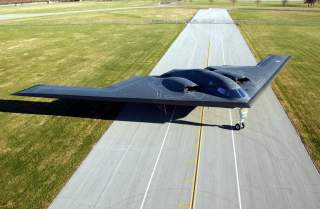 The bomber’s weapons bay could end up being more of a mission payload bay, with surveillance, communications, drone or electronic warfare packages loaded inside to facilitate a variety of missions, particularly in denied environments. The Raider is on the path to being America’s first multirole bomber.

On October 27, 2015, nearly thirty-four years to the day after Northrop Grumman was awarded the contract to develop the first stealth bomber, the U.S. Air Force awarded Northrop a contract for a new bomber: the B-21 Raider. While many of the details of the Raider are shrouded in mystery, we do know a few things about it, and can infer others.The B-21 Raider bomber takes its name from both the twenty-first century and the legendary 1942 raid by Gen. James “Jimmy” Doolittle’s force of B-25 Mitchell bombers against targets in and around Tokyo, Japan. In invoking the Doolittle Raid, the Air Force is drawing attention to attack’s audacious nature, the strategic and tactical surprise, and the epic distances General Doolittle and his “raiders” flew to accomplish their mission.

A tailless, bat-like aircraft, the official rendering of the B-21 Raider released by the Air Force bears a superficial resemblance to the B-2 Spirit bomber. There are important distinctions, however. The B-21 moves its engines closer to the wing root, where they occupy the juncture between wing and fuselage, whereas the B-2’s twin pairs of General Electric F118-GE-100 engines are distinctly apart from the fuselage on the wing. The Raider’s engine air intakes are angled and not serrated like those on the B-2 Spirit.