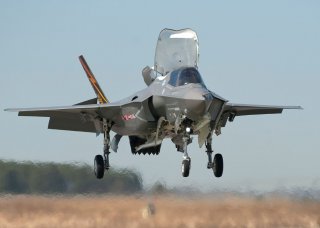 Key point: The Marines need a way to protect shipping and to fight enemy navies. The F-35 just might be the key.

The U.S. Marine Corps wants new missiles so its forces can help the U.S. Navy to sink enemy ships.

And it wants them soon, according to Megan Eckstein, reporting for USNI News.

"There’s a ground component to the maritime fight," Gen. Robert Neller, the Marine Corps commandant, said at a February 2019 conference in San Diego.

Marine units with anti-ship missiles could spread out across islands in order to control strategic ocean checkpoints. "So there’s a lot of geographical chokepoints, and you know what they are, and the potential adversaries know what they are," Neller said. "So if you get there first and you can control that space, then you have an operational advantage."

The Marines' new missile should be compatible with Navy ships, Neller stressed. "This is the same type of stuff you’d want to put on a ship." The Corps could team up with the Navy to test the new weapon, Neller pointed out.

The need is urgent, according to the commandant. "The urgency is just the situation security-wise we find ourselves in the world." China rapidly is modernizing and growing its maritime forces and exerting more and more pressure on U.S. allies in disputed waters in the China Seas.

Beijing considers the string of islands stretching from Japan south to The Philippines -- what it calls the "first island chain" -- to be China's historical sphere of influence.

In the meantime, the Navy has added an anti-ship mode to some of its Standard surface-to-air missiles. The sailing branch also is pulling out of storage old Harpoon anti-ship missiles and could arm some attack submarines with them.

An upgraded Harpoon Block 1C with an active radar seeker and a 490-pound warhead can strike ships over a distance as far as 70 miles. The LRASM and Tomahawk both can hit targets hundreds of miles away with even larger warheads.

It's worth noting that the Boeing-made Harpoon can equip land forces, too. Finland is buying the Cold War-vintage missile for its coastal-defense units. A Boeing official told USNI News that the company has talked to the U.S. Army and Marine Corps about a possible sale.

In the meantime, both the Army and Marine Corps have experimented with their existing High Mobility Artillery Rocket System launchers in an effort to transform them into anti-ship weapons. The 12-ton, wheeled HIMARS can fire a wide range of guided and unguided rockets.

During the Rim of the Pacific war game in and around Hawaii in July 2018, an Army HIMARS battery struck the decommissioned U.S. Navy amphibious ship Racine with five unguided 227-millimeter-diameter rockets. An aerial drone provided the coordinates for the 50-mile strike.

In 2016, the Army began modifying the seekers on some ATACMS in order to improve their ability to hit ships. The Marines quickly could adopt the same kind of missile.

Fighter jets could help the Marine missile batteries to locate targets. In a 2018 demonstration in Arizona, an F-35 stealth fighter detected a test target and transmitted the target's location to a HIMARS battery.

The Marines also have borrowed a tactic from the Army for rapidly repositioning rocket batteries. In December 2018, Marine KC-130 transport planes hauled two HIMARS launchers from Camp Pendleton in California to Dugway Proving Grounds in Utah, where a war game was underway.

At least one of the HIMARS rolled off its KC-130J, quickly fired a training rocket, then loaded back into the KC-130J for its return flight.

In wartime, a Marine rocket battery could quickly deploy to one island aboard Marine or Air Force transports and lob a few rockets at Chinese ships while the transports idled nearby. "After firing each volley, the missile battery would move to a new hide site and await orders to fire again," the California think-tank RAND explained in a 2017 report.

At the same conference where Neller spoke, Brig. Gen. Christian Wortman, head of the Marine Corps Warfighting Lab, reportedly said the Marines would get their new missile in the "near term."

"There’s a couple capabilities out there and we’re going to test them," Neller said.