How Memories of Hiroshima and Nagasaki Constrain the Ukraine Crisis 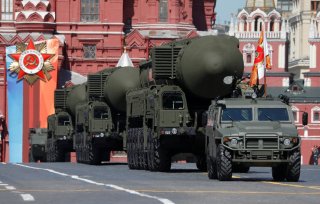 Kremlin spokesman Dimitri Peskov said a few days ago that Russia would resort to the use of nuclear weapons only in case of a “threat to the existence” of his country, and not as a result of the current conflict in Ukraine.

Whatever Russia’s real motives in the current crisis in Ukraine, Peskov’s words seem to reflect a truism widely accepted by the international community: Nuclear weapons are aimed at deterring the other side; they are weapons of last resort, to avoid an existential threat.

Having been used already in 1945, their effects are known. In a sense, a decisionmaker in 2022 still lives in the shadow of 1945. U.S. president Harry Truman’s decision to drop an atomic bomb on Hiroshima on August 6, 1945, and on Nagasaki three days later, on August 9, in order to end the war against Japan, was a singular turning point in the history of international relations.

Fearing the high estimates of U.S. casualties should the war against Japan continue, Truman resolved to employ a hitherto unknown weapon of unprecedented power. Truman was fully aware that the latest attempts to invade Japanese territory had left a significant number of U.S. casualties. In February 1945, the invasion of Iwo Jima had left nearly 30,000 casualties. In April 1945, the United States invaded the island of Okinawa, leaving around 50,000 casualties in one of the most severe battles of the war against Japan. Estimates of an invasion of mainland Japan were around 130,000. The prospect of invading Japan, with the considerable human toll such an operation was expected to entail, led Truman ultimately to decide to employ a hitherto unknown weapon of unprecedented power to end the war.

The attack on Hiroshima killed 66,000 people and injured 69,000 more; the strike on Nagasaki left 39,000 dead and 25,000 injured. Following the latter, Japan finally surrendered. The scenes of utter destruction and the reports of the high number of casualties left an impact that would remain deep-rooted in the consciousness of future generations of decisionmakers.

The atomic bombs dropped on Hiroshima and Nagasaki would become a point of reference: any atomic weapon produced from then on would be compared to those used by the United States in Japan; bomb X would thus be described as being Y times more powerful than the bombs that fell on both Japanese cities. Hiroshima and Nagasaki have also become a clearly defined dividing line between a pre- and a post-atomic period in international relations. Atomic weapons have altered the character of international affairs.

There was no direct military confrontation throughout the Cold War between the United States and the Soviet Union in part due to their respective possession of nuclear arms. The images of the human and material destruction wrought by the use of atomic weapons in Hiroshima and Nagasaki made it abundantly clear to decisionmakers on both sides what the consequences might be if considerably more powerful nuclear arms would be employed.

Indeed, international crises between the two superpowers were managed under the threat of mutually assured destruction—which acted as a constraining factor. Take the Cuban Missile Crisis of October 1962, for instance. One of the reasons it ended without an armed confrontation was the fear of an escalation into a nuclear war.

Paradoxically, atomic weapons proved to be a moderating influence in foreign affairs. In a sense, it was similar to what had occurred in the 1930s. At that time, decisionmakers, who had lived through the horrors of World War I, feared the consequences of another European war in which significantly more destructive weapons would be used. Likewise, the post-World War II decisionmakers, who had witnessed the horrors brought about by the use of atomic weapons in Japan, feared the consequences of the use of considerably more destructive atomic weapons in a future war.

Nuclear deterrence during the Cold War worked because of a combination of prudence and luck. The United States and the Soviet Union were cautious enough not to descend into a nuclear exchange in any international crisis in which they were both involved. However, fortune—or man-made fortune—played its part as well, such as during the Cuban Missile Crisis. Still, as Louis Pasteur said, “Chance favors the prepared mind.” In the shadow of Hiroshima and Nagasaki, concerted and purposeful actions taken to avoid a nuclear confrontation have certainly helped reduce our dependency on chance, and helped us be better prepared for it when unforeseen circumstances arose.

Consequently, Peskov’s statement indicates that, notwithstanding the scenes of destruction and human suffering in Ukraine, President Vladimir Putin would not cross the nuclear redline and give an order to employ nuclear arms to achieve his aims—whatever they are—in Ukraine. Nevertheless, considering the problematic record of Russian assurances during the Ukraine Crisis, should Peskov’s statement be enough to assuage Russia’s rivals?

If the United States could end World War II in the Pacific theater by dropping two nuclear weapons on Hiroshima and Nagasaki, why, in order to end the Russo-Ukrainian War, wouldn’t Russia at least threaten to use nuclear weapons? What if Russia were to resort to nuclear blackmail, whether explicitly or implicitly, to end the war?

Certainly, that scenario appears to be far-fetched. The United States had a nuclear monopoly in 1945; Russia does not in 2022. However, Ukraine is not a member of NATO. As we have seen, Russia is less constrained with regard to Ukraine than it might be concerning any NATO member-state. Would NATO react with a nuclear threat against Russia in the face of a Russian nuclear threat against Ukraine?

To return to Pasteur, chance favors the prepared mind.