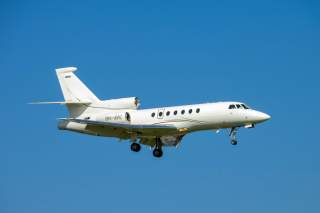 Following a series of training flights, on the morning of May 17, 1987 Suzanna’s crew received the order to load two Exocets and then transfer to Wanda AB for an operation over the Persian Gulf.​

All through 1985 and early 1986, director of the Iraqi Air Force (IrAF) Intelligence Department, Brigadier-General Mudher al-Farhan, was collecting intelligence about the work of the Iranian tanker-shuttle (‘shuttle tankers’ were oil tankers equipped with upgrade fire-fighting equipment operated by specially trained crews, they made way in convoys of four ships escorted by warships of the Islamic Republic if Iran Navy). Every day at 1800hrs, he would brief Major-General Sha’ban about related developments.

As explained by Tom Cooper & Milos Sipos in their book Iraqi Mirages The Dassault Mirage Family in service with the Iraqi Air Force, 1981-1988, at one point in time, Sha’ban realized that the IrAF was in possession of no reconnaissance photographs of any of the new loading terminals in the lower Persian Gulf. About a week after a related report was submitted to the GHQ, two officers of General Military Intelligence Directorate (GMID) arrived in Sha’ban’s office, making him an interesting offer: the intelligence service was ready to provide one of the Dassault Falcon 50 business jets operated on its behalf for a clandestine operation the purpose of which would be to ‘visually inspect’ some of the future targets. Masquerading as a biz-jet carrying `three wealthy Iraqi businessmen’, on Jun. 24, 1986, the Falcon 50 made a trip from Amman in Jordan, via Iraq and Kuwait down the commercial corridor in the Persian Gulf, to Mumbai, in India while carrying three experienced Mirage-pilots and a professional photographer. Underway, it made an ‘unintended navigational error’ and thus passed as close to Sirri as possible — enabling the photographer to take a series of photographs. The Iranians noticed this overflight and this prompted them moving the T-14 Terminal further south: before this could be done, the Iraqis attacked Sirri, on Aug. 12, 1986.While studying the resulting report, Sha’ban then came to the decision to deploy the same aircraft for anti-shipping operation in the lower Persian Gulf. On his request, the IrAF Technical Directorate (then commanded by Brigadier-General Attya) prepared a study that proposed the installation of the same Cyrano IV-C5 radar and the fire-control system of the Mirage F.1EQ-5 info a Falcon 50. With such work being beyond the IrAF’s capabilities, decision was taken to request help from the DIA in Paris. As result of related negotiations, the Falcon 50 with the registration YI-ALE was sent to France. During its rebuild at Villaroche, it retained usual controls on the left side of the cockpit but received a complete cockpit of the F.1EQ-5 on the right side. External changes were even more dramatic: its registration was deleted and it received the typical pointed nose of the Mirage F.1containing the Cyrano radar — and one launcher for AM.39 Exocet missiles under each wing. Following extensive testing in France, it was flown to Iraq on Feb. 9, 1987 and commissioned into the IrAF service — reportedly under the designation ‘Yarmouk’ — six days later. Within the GHQ in Baghdad, the aircraft became known by her code-name, Suzanna.

Following a series of training flights, on the morning of May 17, 1987 Suzanna’s crew received the order to load two Exocets and then transfer to Wanda AB for an operation over the Persian Gulf.

Launched early in the evening under protection of a pair each of MiG-23s and MiG-25s, this brought the aircraft to the usual position north of Bahrain, at which the pilot turned left and then handed the commands over to his co-pilot, the one handling the Mirage-controls. After acquiring a suitable target, at 2108-2109 two Exocets were released from ranges of 35 and 24 kilometres. Both missiles hit their target — the US Navy’s frigate USS Stark (FFG-31), the senior officers of which failed to realise she was under threat. While the first missile failed to detonate, the second went off, killing 37 sailors. The lukewarm attempt by two RSAF F-15Cs to intercept the Iraqi aircraft as this was returning towards the north, ordered by the crew of one of the ELF-1’s E-3A AWACS, remained unsuccessful (in September 1980 after Iran and Iraq declared war four USAF E-3s deployed to Saudi Arabia to provide round-the-clock airborne radar coverage, and enhance Saudi air defences in an operation called ELF-1 which continued for over 8 years). Shaken, but understanding the seriousness of this affair, Baghdad subsequently apologized for this unintentional attack, and compensated the Pentagon and the families of the sailors killed for all the damage caused. In cum, the US entered an uneasy strategic alliance with Baghdad, and — under excuse of ‘better coordination’ with the Iraqi military in order to avoid further incidents of this kind — began providing Iraq with, amongst other items, intelligence about the movement of Iranian shuttle tankers in the lower Persian Gulf.