How Much Did Trump Just Rake in from Silicon Valley? 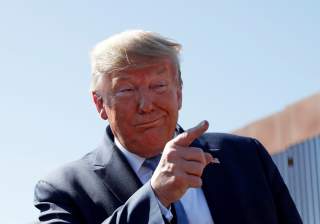 President Donald Trump scooped up $15 million for his reelection campaign during a two-day trip to California, tapping Silicon Valley for money before the 2020 election kicks into high gear.

Trump brought in $3 million for Trump Victory during a fundraiser at the Bay Area home of Sun Microsystems co-founder Scott McNealy, CNN reported Wednesday. He pulled in another $5 million Tuesday night at the Beverly Hills home of businessman Geoff Palmer.

The president’s reelection team was expected to collect another $7 million Wednesday, with $3 million coming from a breakfast at the Intercontinental Hotel in downtown Los Angeles and $4 million at a luncheon in San Diego, officials with the team told CNN.

Trump’s Golden State tour netted him more money than Sen. Kamala Harris of California, a Democrat presidential candidate who  raised only $11.8 million nationwide during the entire April-to-June fundraising quarter in her bid for the Democratic nomination.

The president and the Republican Party have raked in tens of millions of dollars throughout 2019. Donald J. Trump for President, Inc., Trump Victory and the Trump Make America Great Again Committee – raised a combined total of $56.7 million in the second quarter of the year, with the Republican National Convention pulling in a total of $51.3 million during the time period.