How the Navy’s Expeditionary Fast Transports can Support Amphibious Operations 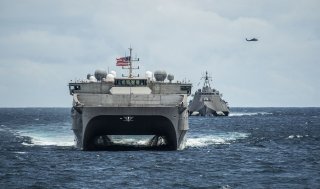 Austal USA is currently under contract to build fourteen Expeditionary Fast Transport (EPF) ships for the Navy, with twelve delivered thus far. Given the rapid expanse in its mission set and multimission functionality to include growing medical support capability, why isn’t the Navy buying more? This question is explored in a 2021 Marine Corps Association paper on the EPF called “Expeditionary Fast Transport Ship: A light amphibious warship stand-in capability,” by Capt. Robert Locker, Jr.

The paper makes points out that the EPF is already performing a number of the amphibious missions designed for the Light Amphibious Warship (LAW) that has not yet entered production.

“Marines are hopeful to receive the first LAW by 2026, whereas the EPF can currently provide company-level ship-to-shore connectors until the LAWs can matriculate into the fleet,” Locker writes.

The paper also suggests that an EPF might not only function as a short-term bridge to the LAW but also as a longer-term supplement. This could be key as demand increases for ships that can participate in amphibious missions in littoral waters. Locker suggests that acquiring more EPFs may lower costs as well as improve Marine Corps operations.

“If the Marine Corps wanted more EPFs to bridge capabilities, than [sic] the vessel would be cheaper to produce than $180 million,” he writes. “Economies of scale were not initially in favor of the EPF: only fourteen vessels were expected to be produced and only twelve were actually constructed. More EPF production would be expected to lower cost.”

The mission profile of the EPFs is now coming into focus. The ships have proven useful for high-speed transportation in maritime warfare and also demonstrated a proven ability to operate as a medical support ship. The EPF might be able to support combat missions and medical operations in other ways as well.

EPFs can also load and disembark M1 Abrams tanks. This capability multiplies amphibious attack options from ship-to-shore. While the EPFs are not intended to function as fully-armed combat vehicles, they are capable of supporting combat operations in many ways. They also include a flight deck that could be used for combat operations, according to a Navy press release.

The EPF can quickly transport combat vehicles, equipment and forces could quickly be to landing sites. EPFs can also support amphibious operations, which could help deter some Russian actions.

The Navy commissioned its twelfth EPF, the USNS Newport, in September 2020. All twelve are operated by the Military Sealift Command of the U.S. Navy.