How the Navy Prepared the USS America for F-35s 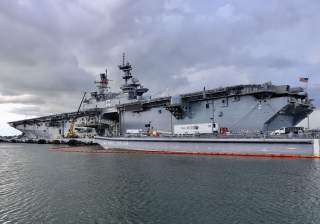 Key point: The military wants more of its ships to be able to handle the F-35B.

US Navy and industry engineers will soon begin additional work on the USS America amphibious assault ship to finalize the ship’s integration with the F-35B Joint Strike Fighter, marking a substantial milestone for the Navy as it prepares for the future of amphibious warfare.

The USS America, the first-in-class of a series of new amphibs for the Navy, recently returned home to San Diego from a seven-month deployment to the Pacific and Middle East. The ship, which went to Guam, Singapore and other strategic areas for missions and training, is now slated to begin an extensive series of Hull, Mechanical and Electrical repairs - and also receive “additional modifications to support F-35 Lighting II operations on board,” a BAE Systems statement said.

The modifications to the flight deck will be an extension of previous work done on the USS America to ensure that the weapons and sensors are synchronized with the Joint Strike Fighter and that flight deck can withstand the heat of the F-35B vertical take-offs-and-landings. Marine Corps Short Take off and Landing F-35Bs have already conducted extensive flight testing on board the USS America.

“With the added structure, these two landing spots will provide the capability to perform closely timed cyclic flight operations with the F-35B without overstressing the flight deck,” a Navy official familiar with the process previously told Warrior Maven.

Sensors, combat systems, radars and weaponry on board amphibs have also been going through a series of upgrades to better integrate with the F-35, service developers explain; also, some of the modifications may involve re-adjusting some of the ship’s antennas in order to allow for a clear flight path for the JSF.

Much of the previous efforts to incorporate the F-35 with the USS America included going inside the ship and dropping lighting and ventilation and piping wiring and everything down far enough so new material can be installed and welded in place, senior Navy officials said.

The USS Tripoli is 844-feet long and 106-feet wide with a weight of more than 44,000 tons. A fuel-efficient gas turbine propulsion system brings the ship’s speed up to more than 20 knots, a Huntington Ingalls statement said.

The third America-Class Amphib, slated to emerge by 2024, features the return of the well deck.

F-35B Will Change Tactics and Procedures on Amphibs

America-class amphibs can transport up to 3,000 sailors and marines, including elements of a Marine Expeditionary Unit, or MEU, designed for amphibious warfare. Amphibious technology on board the ship can include up to 60 HMMWs, Light Armored Vehicles, mortars, artillery and smaller Internally Transportable Vehicles, or ITVs, configured to drive into the back of an Osprey, Navy and Marine Corps officials described.

Kris Osborn is the Managing Editor of Warrior Maven.