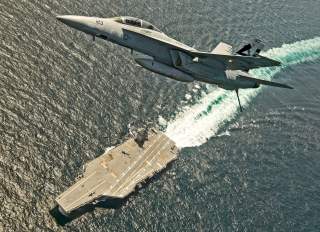 (Washington, D.C.) Navy weapons developers say the service’s emerging Ford-class carriers are engineered for the purpose of enabling a high volume of high-speed, overwhelming air attacks in rapid succession, as compared to today’s Nimitz-class carriers ….all due to new technologies and the design configuration of the platforms.

The Ford carriers, now on the cusp of entering operational service, are built with a larger deck space to enable a higher sortie rate for attack missions. In addition, there are other technologies built into the Ford class that create the opportunity to quickly rearm and refuel fighters, rapidly sending them back into the air for further attack missions, Capt. Ron Rutan, CVN 78 (USS Ford) Program Manager, said in January at the 32nd annual Surface Navy Association symposium, Arlington, Va.

“On Nimitz-class carriers, if you have a bunch of aircraft on the deck edge, you have to bring fuel lines to those aircraft and the other aircraft cannot transit. It creates a lot of logistical problems,” Rutan explained.

Ford class carriers however, as explained by Rutan, are built such that multiple planes can be rearmed, refueled and sent back to war --- much faster.

“On Ford, the weapons elevator brings the weapons right up. The fueling stations are in the deck. The refueling and the adding of munitions are all done at once, creating quick maneuvering,” Rutan said.

Rutan also added that the Ford is better equipped when it comes to conducting high speed turns in rough seas, such as Sea State 5. (Rough Seas, 9ft waves, many whitecaps and some spray)

The innovations for the Ford class, which have been in development for many years now, represent elements of the Navy’s broader strategy to massively increase offensive and defensive war systems for its aircraft carriers. Not only do the new systems on Ford enable a much faster attack op-tempo from fighter jets, but they also include the planned interceptor missiles and the introduction of new platforms such as the F-35C and MQ-25 Stingray - a first of its kind carrier-launched refueling drone. The F-35C, naturally, will bring a new array of attack options for the Carrier Air Wing, including a new measure of aerial Intelligence, Reconnaissance and Surveillance (ISR). Drawing upon new sensor and targeting technology, the aerial attack range will be significantly changed, and stealth technology will enable air attack to operate in higher threat environments, such as areas containing advanced air-defenses. The arrival of the F-35C is, by all estimations, expected to change the paradigm for carrier-air attack.

These enhancements built into the Ford-class are intended to work alongside and benefit from the emergence of the MQ-25 Stingray refueler, a platform which brings the promise of potentially doubling the attack radius for carrier-launched fighters. An ability to refuel while in flight massively extends a carrier's attempt to further project power while remaining at safer stand-off distances. If the combat radius of an F-18 or F-35, on one fuel tank, reaches 300 to 400 miles or so, the aircraft will have to turn around at a certain distance from its carrier. However, if an attack platform can double that range, it can naturally travel much farther, enabling much more “dwell time” when it comes to attacks and provide the option to strike targets farther inland or from greater distances.

“It’s not just Hollywood, although I have never been in the President’s office when a crisis happens and the President says ‘where are the carriers?’ …. But I”m sure that is the first thing that comes to mind when issues happen or a crisis comes up. When that question is asked and the carriers start moving… the opportunity for diplomacy is here, because they know - who ever they are - that we bring to the fight an overpowering effort” Rutan said.