How Nazi Germany Could Have Crushed Russia During World War II 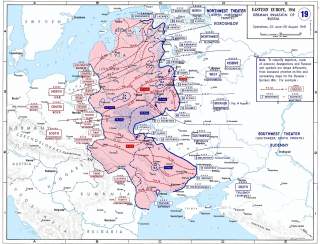 Editor’s Note: This is the fourth in a series of five articles providing critical analysis as to how Germany Might Have Won World War Two.

In our last installment, we discussed how Germany could have forced Britain to accept one of his peace offers and keep the United States out of the war. In this article, we shall examine how Germany might have not only avoided total defeat at the hands of the Red Army, but even might have achieved a measure of victory against her much larger and more powerful Soviet adversary, which was over forty times larger than Germany at its greatest extent.

In actual history, Yugoslavia agreed to join the Axis powers in late April 1941 but days later a coup brought new leadership to power more sympathetic to the Allies. While the new Yugoslav leaders promised the Germans to remain aligned with the Axis as previously agreed while remaining neutral in the war, Hitler viewed the coup as a personal insult and vowed to make Yugoslavia pay, diverting German Panzer divisions from Poland and Romania to invade Yugoslavia and Greece. This ended up delaying the planned German invasion of USSR by five and a half crucial weeks from May 15 to June 22, 1941. In retrospect, there was no military necessity for Hitler to invade Yugoslavia in April 1941. He could have merely sent a few German infantry divisions to reinforce Albania to prevent it from being overrun by Greek troops but he feared potential British reinforcements in Greece, which could threaten his southern European flank. Of course, had Britain and France not still been at war with Germany, it is unlikely that Italy would have invaded Greece in 1940–1941 and risked a British Declaration of War so in that case Operation Barbarossa could have kicked off on May 15, 1941 as originally planned, greatly increasing the chances of a German capture of Moscow in 1941. Combined with Hitler’s subsequent decision to divert his two central Panzer Armies to capture Soviet armies on their northern and southern flanks, this five and a half week delay to the start time of Operation Barbarossa proved fatal to German prospects for victory in the war. Even if Hitler hadn’t pursued a Moscow-first military strategy as his generals wisely advised, invading Russia five and a half weeks earlier might well have been sufficient to enable the Germans to capture Moscow by November 1941, albeit at considerable cost in men and material.

Don’t halt the advance on Moscow of the two Panzergruppen (tank armies) of Army Group Center for two crucial months.

While many historians view the German invasion of the Soviet Union on June 22, 1941 as Hitler’s biggest blunder, evidence from Soviet archives uncovered following the Soviet collapse in 1991 suggests it was successful in preventing a Soviet invasion of Poland and Romania, which had been planned for July 1941. As it turned out, Hitler was correct in his assessment that his invasion of the Soviet Union was necessary as a preemptive attack against Soviets who were planning to attack Germany. In preparation for his planned invasion of Europe, Stalin had, between August 1939 and June 1941, overseen a massive military buildup of the Red Army increasing its total active-duty manpower from 1.5 million to 5.5 million. This expansion more than doubled their total numbers of divisions from 120 to 303 divisions including an increase in the number of Soviet tank divisions from from zero to sixty-one tank divisions as opposed to only twenty total Panzer divisions available in the German Army at the time of Operation Barbarossa. By June 1941, the Red Army boasted seven times more tanks and four times more combat aircraft than invading German forces. The first objective of this planned Soviet invasion of Europe was to occupy Romania to cut off Germany from its access to Romanian oil fields to immobilize the German armed forces and force their capitulation. Then after conquering Berlin and forcing a German surrender, the Red Army was to occupy all of continental Europe to the English Channel, which noted British author, Anthony Beevor, states that Stalin seriously considered doing at the end of the war as well. Viewed in this light, Operation Barbarossa was not a mistake at all but rather an operation which succeeded in destroying the over 20,000 Soviet tanks and thousands of combat aircraft concentrated at the border to invade German territory and postponed the Red Army subjugation of Germany and Europe by nearly four years. Soviet defector, Viktor Suvorov in his groundbreaking book Chief Culprit goes so far as to credit Hitler’s invasion of the Soviet Union as saving Western Europe from being conquered by the Red Army.

Rather, Hitler’s biggest mistake with regards to his war against the Soviet Union was his decision in early August 1941 to divert the two Panzer Armies of Army Group Center to help Army Group North and Army Group South to overrun and encircle Soviet armies on the flanks of its advance resulting in a two month delay in advancing on Moscow when the Soviet capitol was open for the taking. If Hitler had pursued a Moscow first strategy, he could have captured Moscow by the end of August or early September at the latest. He might even have pushed the Red Army back to the Archangel Volga Astrakhan line by October 1941 or by summer 1942 forcing Stalin to accept an armistice recognizing most of Germany’s hard won gains. In his excellent book Hitler’s Panzers East, R.H.S. Stolfi estimated that would have taken away up to 45 percent of the Soviet industrial base and up to 42 percent of her population making it extremely difficult for the Soviets to recover and take back lost territory. While the Soviets could have relocated many of their industries east of the Urals as in actual history, their industrial production would have been much more crippled than it was in actual history without U.S.-UK military industrial assistance. Had the Germans captured Moscow before winter 1941 and held it through the Soviet winter late-1941, early-1942 counteroffensive, Stalin might have requested an armistice on terms much more favorable to Germany than the ones he offered in actual history. Those terms might have included the transfer of much, if not all, of the oil-rich Caucasus region to Germany in exchange for the return of their all-important capitol city to Soviet control. With the Soviets so gravely weakened, Japan likely would have joined the fight to take their share of the spoils and occupy Eastern Siberia as Japanese Army generals had wanted to do all along. Thus, if Hitler had allowed his generals to capture Moscow first, the Germans likely have won the war.

Manufacture three million thick winter coats and other winter clothing for the German army before Invading the Soviet Union.

Due to Hitler’s rosy predictions for a swift Soviet collapse and an end to the war in the East by December 1941, Germany failed to produce winter clothing for his invading troops. According to some accounts, as many as 90 percent of all German casualties from November 1941 to March 1942, totaling several hundred thousands, were due to frostbite. Only in late December 1941 did the Nazi leadership admit their mistake and urgently collect as much winter gear from German civilians to send to German troops as possible.

Allow national independence and self-rule for all of the Soviet territories liberated by German forces.

Perhaps the biggest key to winning their war against the Soviet Union (other than not fighting the United States and the UK, of course) was for the Germans to not only be seen as liberators from Soviet Communist control, as they initially were when they invaded the Soviet Union, but to actually be liberators from Soviet Communist oppression. The Germans should have used nationalism to rally the people of Belarus, Ukraine and the Baltic States to fight not for the Germans or against Stalin but rather to liberate their own countries from Soviet captivity. They should have allowed self-rule for all of these liberated nations just as Imperial Germany had granted them after defeating the Russian Empire in March 1918 as part of the Treaty of Brest-Litovsk. In actual history, the Germans captured 5.6 million Soviet troops and captured Red Army Lieutenant General Vlasov offered to lead a Russian Liberation Army to help fight the Soviets while other leaders offered to lead Ukrainian and Cossack Liberation Armies but Hitler would not allow them to be used in combat on the Eastern Front, believing them to be unreliable. If the Germans had treated the citizens of liberated Soviet territories and Soviet Prisoners of War (POW’s) fairly, millions of additional captured Soviet soldiers might have volunteered to fight on the German side. As it turned out, Stalin ended up using the nationalism of Ukraine and other Soviet republics to defeat the Germans instead of the other way around which represented a major missed opportunity for Germany that helped ensure they lost the war.