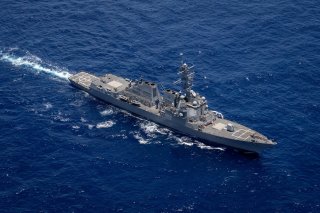 New processes in digital engineering have improved modeling and testing for many new weapons platforms and technologies. Many credit the digital engineering process as one reason why the U.S. Air Force’s sixth-generation stealth fighter has taken to the skies nearly ten years earlier than expected. The Air Force’s Ground Based Strategic Deterrent new ICBM and several hypersonic weapons have also been massively accelerated due to the success of digital engineering techniques.

This is also likely a key reason why the U.S. Navy is making rapid progress on conceptual work on its next-generation destroyer program, the DDG(X). While a hull design has not as of yet been decided upon, the Navy and its shipbuilders are now using advanced computer simulations to assess design configurations.

“We are doing modeling and simulation for multiple different versions of a hull form,” said Katie Connelly, deputy program manager for the DDG(X) program office, at the 2022 Surface Navy Association Symposium. “Once we lock down the actual configuration of the hull, we'll do more modeling and simulation and more testing of the hull in the basin to see how it performs.”

Modeling and simulation is also now being pursued for the Navy’s Integrated Power Systems (IPS) being developed for the ship, Connelly said. The IPS is an electric-drive propulsion system generates unprecedented volumes of power and energy to support the ship’s weapons systems and electronics. Many new weapons systems require large amounts of power. An electric drive can help support this, and it is yet another area of focus for digital engineering efforts.

“With the integrated power system, we're starting with modeling and simulation using different models that have the components and integrating them together and seeing how they perform as hardware becomes available,” Connelly said. “We'll start integrating that as hardware and then eventually we will have a land-based test site that gets stood up in Philadelphia to do all of the IPS integration testing.”