How North Korea Would Retaliate Against a U.S. Military Strike 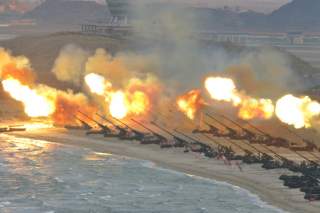 North Korea is powerless to prevent a U.S. strike on its nuclear program, but retaliation is well within its means. The significant military capability that North Korea has built up against South Korea is not advanced by Western standards, but there are practical ways Pyongyang could respond to aggression.

The North Korean military's most powerful tool is artillery. It cannot level Seoul as some reports have claimed, but it could do significant damage. Pyongyang risks deteriorating its forces by exposing them to return fire, however, which significantly restricts their use. Less conventional methods of retaliation, such as sabotage or cyber warfare, are less risky but also limit the shock that North Korea would desire.

After a strike, North Korea's most immediate and expected method of retaliation would center around conventional artillery. Many of the North's indirect fire systems are already located on or near the border with South Korea. By virtue of proximity and simplicity, these systems have a lower preparatory and response times than air assets, larger ballistic missiles or naval assets. Nevertheless, there are several critical limitations to their effectiveness.

The biggest anticipated cost of a North Korean artillery barrage in response to an attack would be the at least partial destruction of Seoul. But the volume of fire that the North can direct against the South Korean capital is limited by some important factors. Of the vast artillery force deployed by the North along the border, only a small portion — Koksan 170-mm self-propelled guns, as well as 240-mm and 300-mm multiple launch rocket systems — are capable of actually reaching Seoul. Broadly speaking, the bulk of Pyongyang's artillery can reach only into the northern border area of South Korea or the northern outskirts of Seoul.

All forms of North Korean artillery have problems with volume and effectiveness of fire, but those issues are often more pronounced for the longer-range systems. Problems include the high malfunction rate of indigenous ammunition, poorly trained artillery crews, and a reluctance to expend critical artillery assets by exposing their positions.

Based on the few artillery skirmishes that have occurred, roughly 25 percent of North Korean shells and rockets fail to detonate on target. Even allowing for improvements and assuming a massive counterstrike artillery volley would be more successful, a failure rate as high as 15 percent would take a significant bite out of the actual explosive power on target. The rate of fire and accuracy of North Korean artillery systems is also expected to be subpar. This belief is founded on the observably poor performance of North Korean artillery crews during past skirmishes and exercises. Though inaccuracy is less noticeable in a tactical sense — especially as part of a "countervalue attack," where civilian areas are targeted — at the higher level an artillery retaliation rapidly becomes a numbers game.

Ineffective crews also rapidly curtail the potential for severe damage. Rate of fire is crucial to the survivability of artillery systems — the name of the game is to get the most rounds on target in the shortest period of time, lest your position be identified and destroyed before the fire mission is complete. Poor training translates to a greatly reduced volume of fire and a painfully limited duration of effectiveness.

Although North Korea could technically open fire on South Korea with all of its artillery systems at once, this would open Pyongyang up to significant counter-battery fire and airstrikes that could rapidly reduce the artillery force it has so painstakingly built up. Instead, as other studies have shown, only a portion of North Korean artillery would be used at a time. This is particularly true for the advanced systems that are most important to Pyongyang: long-range artillery that is able to strike at Seoul. The heavier, more advanced systems are not only difficult to replace, but they are also priority targets for counter-battery fire and airstrikes. Even when firing, artillery systems would be able to do so only temporarily before relocating or otherwise trying to hide the system's firing location to avoid destruction.

Aside from constraints on range and volume of fire, North Korea has to decide what targets to hit in South Korea. There are two realistic options: a counterforce attack or a countervalue attack. In a counterforce attack, North Korea would target South Korean and possibly even U.S. military facilities near the demilitarized zone (DMZ) and north of Seoul. A countervalue attack, on the other hand, is intended to shock South Korea by causing significant civilian casualties and damage to economically critical infrastructure. If North Korea opted for a countervalue attack, the lack of focus on South Korean and U.S. military targets would reduce Pyongyang's ability to limit any response. (Typically, the easiest way to counteract enemy artillery is to destroy it in place.) Engaging civilian targets and infrastructure would not only limit the effectiveness and sustainability of the North Korean artillery volley itself, but it would also open up Pyongyang to more significant counteraction targeting. A mix of both counterforce and countervalue responses may mitigate this risk but would in turn lower the overall effectiveness of the mission compared to full commitment.

Regardless of these considerations and constraints on the North Korean side, if Pyongyang embraces the worst-case scenario for Seoul — the indiscriminate targeting of the capital and its suburbs — the damage would still be significant. Some research claims that overall damage and casualties in Seoul would be minimal, but those studies have relied on very conservative data, especially regarding the effective range of North Korean artillery systems. Many findings do not take into account newly deployed, modernized 122-mm multiple launch rocket systems with extended range, or the much more capable 300-mm multiple rocket launchers. If projectile flight distances reach proven ranges (or commonly accepted ones) and involve these new systems, then the northern portion of Seoul could be saturated with fire. Even areas south of the Han River could be within range of 170-mm self-propelled guns, 240-mm multiple rocket launchers or 300-mm multiple rocket launchers, depending on their position on the North Korean side of the DMZ. If every one of Pyongyang's 300-mm multiple rocket launcher systems were directed against Seoul, their range would be sufficient to rain fire across the city and beyond. A single volley could deliver more than 350 metric tons of explosives across the South Korean capital, roughly the same amount of ordnance dropped by 11 B-52 bombers.

This is an extreme scenario, however, and one in which North Korea chooses to expose all of its most advanced rocket artillery systems simultaneously, suffers no failures, and chooses to direct all of them against Seoul itself. Yet in northern parts of Seoul, well within range of Koksan 170-mm self-propelled guns and 240-mm multiple rocket launchers, a more intense volume of fire could be achieved even if North Korea is prudent enough not to expose all of its capable artillery pieces. Infrastructure damage in Seoul, particularly its northwestern areas, would be difficult to prevent in the event of an immediate saturation of artillery fire. That said, underground shelters and concerted evacuation efforts, which would be initiated immediately in the event of an attack, could greatly reduce civilian casualties. It is also unlikely that North Korean artillery fire would be sustained at great volume. Even an initial mass volley imposes great risk to the artillery systems themselves, making them vulnerable to counter-battery fire. This means casualty rates would drop significantly after the initial barrage, limiting potential civilian casualties to thousands of dead rather than tens of thousands, as has been speculated in some instances.

In addition to its conventional artillery capabilities, North Korea also has a large stockpile of ballistic missiles with much greater ranges. These missiles vary from older Scud variants to North Korean versions of the Russian-designed system. There are also a number of self-developed longer-range missiles in the North Korean arsenal. Even the lowest-range Scud ballistic missiles would be capable of striking anywhere in South Korea. The main factors constraining the use of these systems, therefore, are volume of fire, equipment failures and depletion of stockpiles.

Even subtracting the most dated portions of the North Korean stockpile — which may not be in operational condition — it still has more than 1,000 ballistic missiles that could strike across South Korea. These range from Scud-based Hwasong missiles to Nodong and Taepodong projectiles. The Hwasong and Nodong missiles are the most important for achieving volume of fire, especially considering North Korea's limited ability to launch Taepodong missiles. The Taepodong is restrained by Pyongyang's dependence on large surface infrastructure, found in only two locations in North Korea. The long preparation times before launch make the larger missiles extremely vulnerable to counterstrikes, and the Taepodong does not deliver significant advantages over the Nodong missiles.

When assessing the damage that could be done by North Korean ballistic missile strikes, much depends on how they would be used. In conjunction with conventional artillery strikes, ballistic missiles could provide significant extra firepower directed at Seoul and surrounding areas. North Korea could also use these weapons to expand the indirect fire threat to the entirety of South Korea. This means that there would be less concentration of firepower as a whole but that a diverse spread of locations throughout the country would be subject to infrastructure damage or casualties.