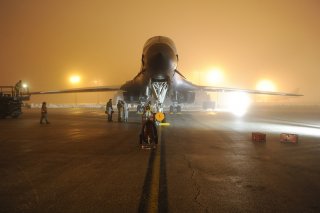 To paraphrase an old military catchphrase, "old warbirds never die, they simply rust away." Retired American aircraft are often sent to the Davis-Monthan Air Force Base in Tucson, which has been the site of the largest aviation "boneyard" since the end of the Second World War.

Thanks to low humidity that averages in the 10-20% range, meager rainfall of less than 11-inches annually, hard alkaline soil and a high altitude of 2,550 feet, this is the perfect location for the storage of old aircraft for cannibalization or even possible reuse. Moreover, the geology of the desert has meant that aircraft can be moved around without the need to pave the storage areas.

The "boneyard" began in May of 1946 when more than 600 B-29 Superfortresses and 200 C-47 Skytrains were brought to the facility. Over the years the number of aircraft at the facility has only grown – and it was earlier this year that the United States Air Force announced that it would send about 100 planes from its bomber, airlift, tanker and drone fleets to the boneyard.

The Air Force announced it would cut 17 non-nuclear B-1B Lancer bombers, and reduce its fleet to just 44 planes.

However, it seems that the boneyard isn't a final resting place for all of the aircraft that are sent there. The Air Force announced that it is sending a B-1B Bone bomber from the boneyard to the National Institute for Aviation Research (NIAR) at Wichita State University in Kansas.

Unlike past planes – notably the Enola Gay and Bockscar – which were stored at the facility before going to museums, the B1-1B isn't destined for display.

Rather, researchers will create a 3D scan of the entire airframe and that will be used to create a highly detailed "digital twin" model that can help identify areas of the aircraft that suffer high levels of fatigue. With this data researchers can create a model that to predict future maintenance needs for those B-1B bombers that remain in service.

This is important because the B-1B Bone has long been plagued by structural fatigue, which has lead to restrictions in how as well as how much the bombers can fly during training even actual operations.

The Air Force Life Cycle Management Center (AFLCMC's) is overseeing the project, and its B-1 Division will work with NIAR to study the effects of flight operations on aircraft structures. This will involve taking the plane completely apart, scanning every single structural component down to the nuts and bolts and then reassembling the digital version of the aircraft.

"We are taking a real aircraft from the Boneyard (309th Aerospace Maintenance and Regeneration Group at Davis-Monthan AFB, Arizona), and it will fly again in a digital format," explained Lt. Col. Joseph Lay, B-1 Program Manager.

The B-1B that is going digital is tail #85-0092; manufactured in 1985 it last saw active service in 2002 with the 128th Bomb Squadron at Robins AFB, Georgia before going into storage in the desert. It made a good test aircraft as it has flown well beyond its original planned service life.

"Through the scanning process, we will discover all the places that saw structural failure or damage.  It will create a living medical record for the B-1," Lay added. "Then we will be able to apply data from aircraft in the field to help us predict areas that are more likely to have structural issues. This living virtual model of the B-1's structure will be superimposed with layers of maintenance data, test/inspection results, and analysis tools, which can be integrated over the aircraft's life cycle."

Another benefit of the virtual study is that it can allow for the testing of new parts.

"We have never had the ability to prototype a repair part," Lay explained. "With this, we will be able to design a part and fit test it in the digital world before we manufacture the real thing. The ability to do a virtual fit check could be very beneficial."

The digital B-1B will allow researchers to have unprecedented information that could allow the B-1 Division to be much more predictive versus reactive with respect to structural issues.

"You would even be able to put on some goggles and take a virtual walk through the airplane, see how parts fit together and interact with each other without ever having to leave the office or your telework environment," said Lay. "We expect to learn a lot about this platform."

The B-1B has been undergoing a month-long process to remove the wings, horizontal and vertical stabilizers, and next the 29-foot wide by 130-foot long aircraft will be loaded on flatbeds for the 1,000 mile drive from Arizona to Wichita, Kansas.

It is a shame it couldn't have flown there, but this effort will help keep other B-1Bs flying and that is what really matters.