How This One Rare Earth Processing Plant in Malaysia Could Change the U.S.-China Trade War 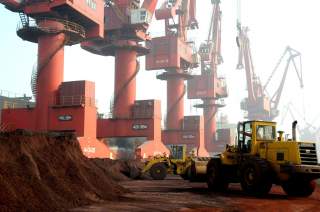 The Lynas facility is particularly controversial in Malaysia due to a high-profile public health disaster in the 1980s at a Perak rare earth facility — whose license happened to be approved by none other than Mahathir during his earlier stint as prime minister.

A key link in the global rare earth supply chain is set to stay in business — albeit perhaps not for very long. The Malaysian Atomic Energy Licensing Board officially decided on Aug. 15 to extend an operating permit for Pahang state's Australian-owned Lynas Advanced Materials Plant, which processes rare earths that the company mines in Australia, for an additional six months ahead of a Sept. 2 expiration date. The decision addresses an eight-month dispute between Lynas and Kuala Lumpur regarding the processing and disposal of low-level radioactive materials like thorium that are mined alongside rare earths but become waste after the rare earth elements are separated.

As the only major processing facility outside of China, the Lynas facility is critical to buyers like Tokyo and Washington, especially at a time when China is threatening to cut off exports of rare earth elements, which are essential in the manufacture of high-tech devices, to the United States as part of the two countries' trade war. But while the extension is sure to ease Washington's stress in the short term, its renewal has riled up supporters and detractors of the plant alike. For the former, the six-month extension was surprisingly short, given that Malaysia usually issues permits for three years at a time. For opponents, the decision is resurrecting anger over environmental damage caused by waste and radiation from the plant. And given Prime Minister Mahathir Mohamad's shaky hold on power, domestic political considerations may yet scuttle a vital cog in the global rare earth supply chain.

A Crucial, If Controversial, Facility

The Lynas facility is particularly controversial in Malaysia due to a high-profile public health disaster in the 1980s at a Perak rare earth facility — whose license happened to be approved by none other than Mahathir during his earlier stint as prime minister. Given the public anger toward the plant, Lynas must fulfill a number of conditions if it is to receive another extension in March 2020. First, the company must provide the licensing board with a detailed plan as to where it will construct a new processing facility outside Malaysia within four years. Additionally, the company must obtain local approval for a plan regarding the long-term disposal of low-level radioactive waste. (The facility currently holds roughly 580,000 metric tons of such waste.) In fact, news reports from May suggested that Lynas will move the initial processing phases to one of two sites in Western Australia, conducting the rest of the refining in Malaysia.

This chart shows the various products that are derived from rare earth elements.

Environmental concerns notwithstanding, the facility is of great importance, especially for those like Japan and the United States looking for alternatives to Chinese supplies. While China possesses the lion's share of global rare earth processing capacity, Lynas claims the seven-year-old plant has the capacity to meet roughly a third of global demand for light rare earth elements like neodymium and praseodymium, making it crucial to the ability of the United States and others to find alternatives to China in the short term. The United States, Australia and Canada have recently formed an alliance to promote the development of strategic mineral sources as part of an initiative that will promote other alternative mining and processing facilities. In addition to that long-term cooperation, Lynas has also partnered to build a new facility in Texas that could open as soon as 2023. In the meantime, the company announced in June that it was stockpiling neodymium and praseodymium for its "strategic customers" — which may very well include the United States.

In granting the extension, Mahathir has decided to prioritize emphasizing Malaysia's friendliness to foreign investment over environmental issues. Nevertheless, the provision of such a short extension — alongside requirements that the company demonstrate how it intends to relocate the most ecologically destructive processing activities abroad — aims to mitigate concerns from the public, as well as allied parties in the country's ruling, but unstable, Pakatan Harapan (Alliance of Hope) coalition. But public objections remain, and protests are scheduled in the coming weeks.

Rifts in Mahathir's coalition might present even greater problems for the plant going forward. Pakatan Harapan's popularity has taken a nosedive due to Malaysia's economic struggles, while the coalition itself is struggling to maintain unity amid internal disagreements over the nonagenarian Mahathir's apparent reluctance to hand over power to Anwar Ibrahim People's Justice Party (PKR).
Mahathir's move represents a broadside to his Malaysian United Indigenous Party's (BERSATU) coalition partners like Anwar's PKR and the ethnic Chinese-dominated Democratic Action Party (DAP), both of which have lawmakers from the Pahang area that campaigned against the Lynas plant in last year's elections. Although both of these parties hold more seats than Mahathir's BERSATU, they don't have the clout to nix the project. That, however, does not mean that they won't work to hinder the deeply unpopular deal.

Though the Lynas plant can continue operations another six months, local concerns over pollution could ultimately derail its operations, which remain in the spotlight due to China's continuing threats to withhold rare earth exports to the United States. But with Washington and its allies still a couple of years away from developing additional rare earth mines and processing facilities to wean themselves off their dependence on Beijing, Lynas will remain critical in the short term to their ability to secure inputs crucial to modern militaries and economies. Any pause in production there — whether short or long — would tighten China's stranglehold over the market.

A Malaysian Rare Earth Processing Plant Looms Large in the U.S.-China Trade Spat is republished with the permission of Stratfor Worldview, a geopolitical intelligence and advisory firm.