How to Pick Your Space Force Commander 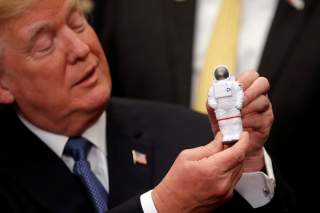 Congress and the president together have created a U.S. Space Force. Now, the hard job of selecting its head begins.

The new command’s top leadership is of critical importance to the nation, because while most tasks can be delegated, it will be these leaders that establish the vision and culture of the service. Sooner or later, therefore, Air Force Secretary Barbara Barrett will need to interview and forward candidates to the Senate.

The Current State of Play

The current legislation gives the president the option of allowing General John “Jay” Raymond to transition from the Air Force Space Command Commander directly to be the U.S. Space Force (USSF) commander—the Chief of Space Operations (CSO)—without a separate confirmation process. General Raymond is also presently dual-hatted as the U.S. Space Command (USSPACECOM) commander. The legislation, however, only gives the secretary of defense the flexibility to continue that dual-hatting for the first year. After that, Raymond would have to surrender one of those positions. The USSPACECOM position is the more senior of the two, reporting directly to the president and secretary of defense, and it therefore is likely to be the one that the general picks.

This, in effect, means that Air Force Secretary Barrett has less than a year to pick her Space Force Commander. Even that timeframe may be generous, because a more senior officer might move on in the interim and General Raymond might be further promoted. As well, either the president or the secretary of defense might exercise their discretion to separately fill the position should a suitable candidate emerge. Lastly, Raymond himself might prefer to delegate USSF responsibilities to enable better focus on USSPACECOM responsibilities, or deliberately open the position to groom other senior space leaders.

The responsibilities of the USSPACECOM commander and CSO are equally significant but distinct from one another. USSPACECOM is an operational warfighting command, responsible for daily operations, war readiness, and timely coordination with other warfighters; its focus is today, with at most a five-year planning horizon. By contrast, military services build the force—experimenting, designing and fielding systems, recruiting, training and educating personnel, overseeing promotions. They often have much longer time horizons: thirty years or more.

What, then, should the defense secretary, president, and American people want from their CSO? In short, they need an individual who will inspire the troops, build a culture of action and initiative, and catalyze a large scale of creative activity in technology and experimentation. What is supremely important is that the CSO be an individual of vision and not serve as a cap on the performance of the rest of the organization due to a failure of imagination or a lack of willingness to experiment.

With that in mind, here are a list of important questions for Air Force Secretary Barbara Barrett to ask prospective candidates in her quest to find the CSO with the right vision for the future:

Eyes on the Horizon

America has a major interest in who gets confirmed as the country’s first CSO. After all, that person will be the one who sets the vision and culture, and sows the seeds for decades to come. Boldness and confidence, vision and enthusiasm cannot be delegated. The Space Force will adopt the personality of its leader, for good or for ill—and the Space Force needs to be bold immediately.

As such, the new CSO should be a true believer in the power of space, able to motivate and communicate a compelling spacepower narrative to the Space Force, to Congress, and to the American people in order to secure their support and funding. That person should be able to model professional risk-taking and initiative, and liberate the creative energies of the young officers and enlisted personnel under his or her command. Most of all, the next CSO will need to have a vision of national spacepower that helps make America’s newest military command all that it can be.

Peter Garretson is a senior fellow in Defense Studies with the American Foreign Policy Council (AFPC) and a strategy consultant who focuses on space and defense.