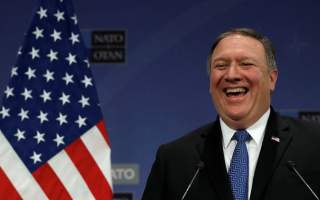 Speaking at the Detroit Economic Club, Secretary of State Mike Pompeo raised the specter of America losing out to China if Washington fails to pursue robust international economic engagement.

Like many savvy Washington officials before them who knew better than to “waste a crisis,” the secretary and the ambassador seek to exploit the current “national emergency”—a newly-assertive China—to maintain or even increase their agency’s slice of the federal budgetary pie.

The State Department greatly increased in size during the Obama era. Pushing back against administration plans to shrink it, Ambassador Stephenson pitches beefing up embassy staffs and deploying hundreds of mid-level economic officers to strategic points around the globe to counter China’s Belt & Road Initiative.

Upping America’s game overseas is not a bad idea. But there is a way for Pompeo to strengthen U.S. economic diplomacy while simultaneously delivering the budget cuts and organizational consolidation that President Trump is demanding throughout the federal government.

How? By correcting a forty-year-old mistake and moving the function of the Foreign Commercial Service (FCS) from the Commerce Department back to its original, and natural, home at the State Department.

The FCS was never a good fit at Commerce, a fundamentally domestic agency that views the rest of the world through protectionist lenses. For instance, its anti-dumping penalties and countervailing duties on exports to the U.S. reduce foreign access to the American market.

But the job of economic and commercial officers at U.S. embassies and consulates should be, as Secretary Pompeo reminded the crowd in Detroit, to press unceasingly for market access on behalf of all American companies—not just for those well-heeled political insiders with the resources and know-how to buy preferential government treatment (which is the current FCS pay-for-play model).

So, you may ask, how did the FCS end up at Commerce in the first place?

To answer that question, we must go all the way back to 1897, when the United States Commercial Service was established. Maybe it could have been justified then when America was a rising global power, and there were few (if any) for-profit financial information services available to American companies who wanted to export.

But that is certainly not the case in the internet era. Closing down an anachronistic bureaucratic relic of the nineteenth century would save taxpayers tens of millions of dollars annually and eliminate a potential hotbed of cronyism.

So, why wasn’t the Commercial Service shut down decades ago? In part, because of pressure from public sector unions to preserve jobs. It was also because big U.S. companies that could afford the overhead expense could purchase taxpayer-subsidized FCS influence from U.S. embassies to assist them in sealing overseas deals.

Another reason can be traced to the “political cone” officers who have long dominated the Foreign Service. They were all too happy to lock in a significant pay raise while also eliminating some of the competition for the top prizes in their profession—ambassadorships.

Meanwhile, the career civil servants at the old Commercial Service, and their patrons among long-time appropriations staffers on the Hill, saw the creation of the FCS as a new lease on life.

All of that was in the mix forty years ago when the key provisions of what came to be known as the “Foreign Service Act of 1980” were being negotiated.  As a part of that process, President Jimmy Carter issued an Executive Order (Reorganization Plan Number 3 of 1979) to create the FCS. Hundreds of State Department Foreign Service economic and commercial positions at dozens of the more desirable embassies and consulates around the world were traded away to the Department of Commerce as part of a deal to secure a twenty percent pay raise and the creation of a “Senior Foreign Service.”

Over the subsequent decades, many of those “lost” State economic positions have gradually withered on the vine at Commerce, which has treated the FCS—according to some of its current, demoralized employees—like a red-headed stepchild.

Earlier this year, the Trump administration eliminated dozens of questionable and costly “special envoy” positions created at State during the Obama administration. Ambassador Stephenson wants to stave off headcount loss by shifting those positions to the battlefronts of economic diplomacy overseas.

But Secretary Pompeo need not do that. Instead, he can maintain those cuts and save still more taxpayer dollars by working out a deal with Commerce Secretary Wilbur Ross whereby President Trump issues a new Executive Order to abolish the FCS and move its economic positions back to State—where they belong.

While they’re at it, they can take a hard look at the costs and benefits to taxpayers of continuing to fund the domestic commercial service.

In so doing, Pompeo could incentivize the best and brightest younger economic officers to stay at State, dangling as rewards for good performance those career-enhancing assignments in the nicer places that Jules Katz traded away so long ago. In time, a new cadre of senior economic officers can compete for, and win, a larger share of the ambassadorships that are allotted to career people. This, in turn, would harden the front lines in the economic warfare battle zones.

Finally, all of this could give Pompeo some bragging rights as he seeks to fulfill his pledge to lead the economic team at State in a way that positions America as a beacon of economic freedom, showcasing the “free market’s capacity for wealth creation and the success of both consumers and businesses alike.”

James M. Roberts is Research Fellow for Economic Freedom and Growth at The Heritage Foundation. Prior to joining Heritage, Mr. Roberts was career economic Foreign Service Officer at the State Department.

Image: U.S. Secretary of State Mike Pompeo smiles as he attends a news conference after a NATO foreign ministers meeting at the Alliance’s headquarters, in Brussels, Belgium April 27, 2018. REUTERS/Yves Herman