How Is President Trump's Approval Rating Among Children? 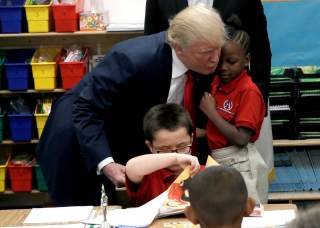 Ask children about politics, and they’ve got something to say.

The president of the United States, said a fifth-grade girl in 1958, “has the right to stop bad things before they start.”

In 2017, a fourth-grade boy said the president “lies, (is) destroying our country.”

And in 2018, a sixth-grade girl said the president “goes to Florida, plays golf, talks with other political leaders, tries to help our country, insults immigrants and people from other countries.”

Political views begin to form in childhood. Children learn who political leaders are and develop attitudes about both leaders and political institutions.

One consequence of rising levels of negative partisanship (as compared to joining a party because you feel positively toward them, their politics or their leaders) and negative campaigning is that today’s children are exposed to more negative messages about politics and political figures than children in the past.

What do kids today think about the presidency and the president? How does this compare to what children thought in the 1950s?

We are political scientists who conducted this research because we want to understand what young children think about politics.

We draw our conclusions from surveys and interviews we conducted in schools in fall 2017 and winter 2018. Nearly 500 children ages 6 to 12 across four locations in the United States participated.

The children answered questions about the importance of the office of the president and the president himself. We compare this with data reported in published research on children’s views in the 1950s and early 2000s.

There was no data on the topics we explore collected between the late 1950s and 2000, so we can’t comment on or compare our findings to the views of children during that period.

One of ‘four most important people’

Do children respect the office of the president?

Children today, just like children over the past 50 years, have positive views of the presidency. In our sample, 72% of students selected “president” as one of the “four most important people” out of a list of 10 adult roles, such as doctor, schoolteacher and judge.

When we asked the children, “What kinds of things do you think the president does?” children largely provided factual descriptions of the president’s daily activities.

The president “Makes Laws, Does papers, Tells the other people what to do,” one fourth grader told us. Like 1950s children, more than three-quarters of children in our study categorize the president’s activities in these factual ways.

A small portion of our sample (7%) listed something negative when describing the president’s activities, such as the child who wrote that the president “starts a war, all about money, make fun of people.”

In short, most children see the presidency in factual and positive ways.

Children in our study evaluated the president much more negatively than did children in the 1950s.

In contrast, 1% of 1950s children considered the president “less honest than other people”; 49% of today’s children hold this view.

Children’s assessments of the president’s work ethic and knowledge levels also have become less favorable over time. Additionally, the global assessment of the president turned markedly negative: 3% of 1950s children viewed the president as “not a good person” compared to 51% of children in our sample.

Where does Trump fit?

Do today’s children see other political leaders in a negative light, or have we uncovered a Donald Trump-specific effect?

We asked children about the performance of both former President Barack Obama and Hillary Clinton (had she been elected to the presidency).

The children view former President Obama very positively (72% said he did a “very good job”), similar to how children viewed President Dwight Eisenhower in the 1950s.