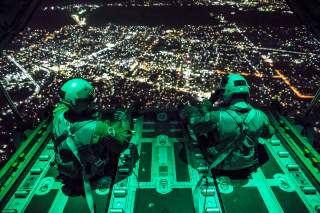 The Heritage Foundation recently released its 2019 Index of U.S. Military Strength. Now in its fifth year, Heritage’s Index is a reliable bellwether of Washington’s hawkish consensus: the world’s problems are usually America’s problems, and military force, or the threat of it, is often the best tool for dealing with those problems The United States, which spends more on defense than the next seven countries combined, is the only state that can project power around the world and is unchallenged in its entire hemisphere. Yet Heritage rates overall U.S. military power as “marginal.” Such a conclusion rests on a worldview fundamentally at odds with both America’s history and her current position in the world.

When measured against the supposed need to fight two “major regional contingencies” (MRCs), Heritage finds America’s military lacking.This is an accurate conclusion. The demands of two counterinsurgency campaigns in Iraq and Afghanistan were only met by keeping one war as an economy of force operation and filling holes with contractors, stop-lossed troops, and risk averse allies. This is to say nothing of significantly lowering recruiting standards just to keep the military adequately manned. Neither war, it is clear, was a success.

Why should America maintain a military large enough to fight two major wars simultaneously? Despite relentless threat inflation and fear mongering by the majority of the media and the foreign policy establishment, the United States is far safer and more secure today than it has been for most of the past century. Our real security problems cannot be solved with a larger military. In fact, increased Pentagon spending will likely make us weaker in the long run. The president appears to recognize this, having recently called for a $16 billion reduction in the defense budget for next year.

In national security, as in real estate, location is everything. Our nation is and always has been uniquely secure because of its geography. Jules Jusseraud, the French ambassador to the United States from 1902 to 1925, offered perhaps the best summary of America’s providential location. The United States, he wrote, “is blessed among the nations. On the north, she has a weak neighbor; on the south, another weak neighbor; on the east, fish, and the west, fish.” Despite the insipid ideology of globalization, Jusseraud’s conclusions are as true today as when he wrote them more than a century ago. America, a country of unparalleled physical and human resources, safe from invasion, does not need a large army.

The war against Islamic terrorism has proved resistant to military solutions. Despite seventeen years of nation building and security assistance, Afghanistan is a stalemate at best. The U.S. military commander there was nearly killed in an insider attack in October. Iraq has been saved, for now, from the fanatics of the Islamic State—a group that came into existence as a result of the U.S. invasion. Since 9/11, jihadist groups have multiplied throughout the Middle East and North Africa. Afghanistan, Iraq, Libya and Yemen are all essentially failed states.

Russia and Iran are invoked by Heritage and many others as growing threats to the United States Yet neither potential adversary justifies significant military expenditure or deployment of American troops. We have partners who can and must deal with these regional threats. Safeguarding the United States depends on effective intelligence gathering and homeland security, not massive military deployments overseas.

Liberal internationalists and exponents of American “leadership” (often a code for military intervention) ceaselessly extol the benefits of America’s vast array of allies. Yet those same allies have been free-riding on American security guarantees and forward deployed American “tripwire” forces for decades. At nearly $70 billion, Saudi Arabia has the third largest defense budget in the world. Its Iranian adversary spends less than a quarter as much. The Gulf Cooperation Council countries and their other Sunni Arab allies are more than capable of containing Iran—and have a far greater interest in doing so than we do.

In Europe, the situation is much the same. Combining just France, Germany, Italy, the UK, Greece, and Spain would yield a defense budget double Russia’s and an active duty force 25 percent larger. Both Russia’s defense spending and population are falling. After a managed period of disengagement, there is no strategic need for U.S. land forces to defend Europe—if we could even get them there.

China is a potential long-term strategic challenger to the United States. America is a maritime nation and a war with China would primarily be a naval war. A larger and better navy is the only justifiable case for greater U.S. military spending. But with China, economic, political, and information warfare are paramount. We should worry far more about Chinese money flushing through major U.S. political donors than we do about artificial islands in the South China Sea.

Heritage’s experts are fond of saying that defense spending, when measured against GDP, is actually too low. But these comparisons are facile if not outright misleading. The U.S. national debt is well over $21 trillion. There are other staggering unfunded liabilities. As a Wall Street Journal headline trumpeted, “The Pension Hole for U.S. Cities and States Is the Size of Germany’s Economy.” We also face spiraling costs in health care and higher education. A nation that is too fat to fight—or too dumb—is in far more danger than one without 13 aircraft carriers.

The U.S. economy has always been the foundation of American power and security. We are highly unlikely to be able to even maintain our current defense spending in the next decade—the Terrible 20’s, as it is already being called by defense budgeters. America cannot afford to dominate the globe militarily. But it has more than enough money to maintain a global balance of power and defend its vital national interests.

If we did need more money for defense, we could probably find it fairly easily in a Pentagon that employs six hundred thousand contractors and has never been audited. But the Heritage Index, and Washington in general, have little to say about that. The newly-critical “Ganja Gap” replaces the Cold War’s Fulda Gap, there is always a new weapons system we can’t do without, and threats are everywhere. When it comes to Pentagon spending, it’s business as usual in the Swamp.

Gil Barndollar is the director of Middle East Studies at the Center for the National Interest and Military Fellow-in-Residence at the Catholic University of America’s Center for the Study of Statesmanship. A former Marine infantry officer, he has deployed twice to Afghanistan and to the Republic of Georgia, Guantanamo Bay, and the Persian Gulf.