How To Replace the F-35: Meet the 'Advanced' Super Hornet for the U.S. Navy 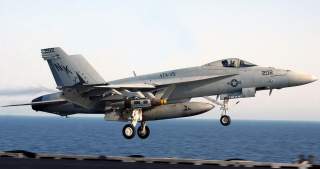 The bottom line is that while the F/A-18E/F will never be a stealth aircraft, it could offer a less costly 80 percent solution for the U.S. Navy’s requirements. Once developed to its full potential, the Advanced Super Hornet could perform most of the missions envisioned for the F-35C except penetrating strike—it would have to rely on stand-off weapons for that mission.