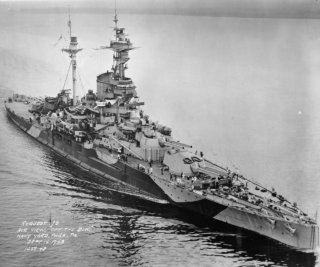 In what might be a most unusual twist of fate, a Royal Navy battleship with the most regal name, the HMS Royal Sovereign (05) ended service with the Soviet Navy following the Second World War. The 30,450-ton Revenge-class battleship was laid down at the Portsmouth Royal Dockyard in January 1914 and launched in April of the following year. While she was completed in May 1916, she wasn't ready to participate in the Battle of Jutland during the First World War, and instead served with the Royal Navy's Grand Fleet where she saw no action.

Powered by eighteen Babock & Wilcox boiler units, which fed four steam turbines, she was capable of reaching speeds of twenty-three knots and had a range of eight-thousand miles while cruising at a leisurely ten knots. She was a well-armed battleship when she entered service, and that included eight fifteen-inch main guns arranged in four twin-gun turrets. Secondary armament consisted of fourteen 6-inch guns positioned at single gun turrets around the superstructure. The battleship had up to thirteen inches of armor around the belt and up to four inches along the deck.

After the First World War, she was assigned to the Mediterranean Fleet and was based in Malta. However, unlike many of the Royal Navy's warships that had been built during the Great War, Royal Sovereign and the other Revenge-class sister ships were never fully modernized prior to the outbreak of the Second World War.

In fact, the only significant improvements were to her anti-aircraft batteries, which were upgraded just prior to Germany's invasion of Poland in September 1939.

Initially assigned to the Home Fleet, HMS Royal Sovereign was tasked with convoy protection until May 1940, and after that was reassigned to the Mediterranean Fleet. She arrived in time to take part in the Battle of Calabria in 1940, but her slow speed meant she failed to engage the more modern and faster Italian battleships. She was next deployed to the Eastern Fleet in March 1942 in the Indian Ocean, based out Trincomalee, Ceylon. Following the raid by Admiral Nagumo's Kido Butai in March 1942, she was withdrawn with the bulk of the Royal Navy's fleet and then sent to Eastern African, where the aging battleship once again was used to escort convoys.

HMS Royal Sovereign had survived service in the Atlantic, the Mediterranean, and Indian Oceans. However, her usefulness in the Royal Navy had come to an end. She underwent a year-long refit that began in the summer of 1943. After sailing with convoy JW.59 through the Arctic Sea on the northern Lend-Lease run, she was transferred to the Soviet Union in August 1944 in lieu of sending several captured Italian warships to the Black Sea Fleet as part of Italy's reparation payment.

Renamed Arkhangelsk and crewed by Soviet sailors, she became Admiral Gordey Levchenko's flagship. At the time, she was the largest vessel in service with the Soviet Navy, and she continued to escort Allied convoys until the war's end. Following the surrender, she ran aground and was seriously damaged.

Arkhangelsk was returned to the Royal Navy on Feb. 4, 1949, and she arrived at Inverkeithing, Fife, Scotland in May of that year for scrapping. She became the only battleship to see service in World War II in the service of two allied nations.