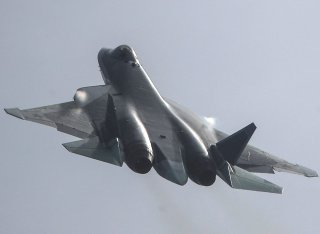 Test pilot Evgeny Frolov, who “controls the [drone] system from the ground,” gave a far-reaching interview to prominent Russian news network Russia 1 late this month. Frolov confirmed prior reports that the S-70 Okhotnik-B is a heavy stealth combat drone that adheres to the “loyal wingman” concept, acting in full conjunction with Russia’s fifth-generation Su-57 air superiority fighter. Frolov went into depth on Okhotnik-B’s battlefield role, explaining that the drone is designed as a natural extension of the Su-57’s combat capabilities. The drone shares the same artificial intelligence-powered command network as the Su-57 to which it is attached, tracking and targeting enemy units automatically without any need for manual inputs on the part of the pilot.

The current iteration of Okhotnik-B offers some level of redundancy through overlapping manual systems, including an LCD status display. Frolov clarified that the serial production version of Okhotnik will be fully autonomous: “this system will be fully automated in the future, it will likely not have these [manual] control features, and manual handling will likely not be present.” Frolov’s interview puts to rest long-standing speculation concerning Okhotnik’s design concept, confirming that it is intended for autonomous operation without any manual backup systems.

Okhotnik-B sports a flying-wing design and is powered by either a single AL-31F or AL-41F engine. Boasting a composite materials construction and radar-absorbent coating, the drone is being built to offer superior stealth performance. The full extent of Okhotnik-B’s stealth capabilities remains to be seen; as previously argued by The National Interest’s Kris Osborn, there are some subtle design cues that Okhotnik—with its relatively sharp and angular design—may underdeliver in the low-observability performance department. Nevertheless, Okhotnik’s prototype airframe may very well see stealth-oriented design improvements as the drone moves further along in the production cycle on its way to becoming a full-fledged serial product.

Precise performance details remain elusive, though current reporting notes that Okhotnik-B has a top speed of up to 1,000 kilometers per hour and range of just under 6,000 km at full payload capacity. While it’s unclear exactly what armaments Okhotnik-B’s will carry in its internal bays, it appears that the combat drone can leverage its offensive capabilities to strike in situations deemed too high-risk for its accompanying Su-57. Its most valuable role will likely be that of reconnaissance, utilizing its extensive suite of onboard sensors to feed the Su-57 information in real-time through datalink. It could feasibly extend the Su-57’s battlefield awareness, providing targeting information to help cue its long-range R-37M missiles.

It was reported earlier this month that three more Okhotnik units are under construction, with unspecified improvements made to the drones’ communications system and airframe. Frolov’s commentary comports with prior reports that the Okhotnik drone is currently being tested in a “partially autonomous” mode, with fully autonomous flight trials slated for the near future. Formally unveiled at Russia’s ARMY 2019 defense exhibition, Okhotnik-B is scheduled to enter service in 2025.