How Russia Plans to Storm the Beaches Like the Marines 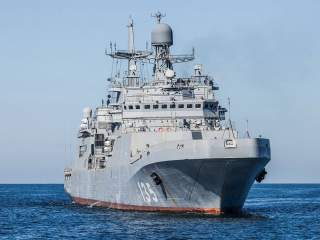 In 2014, Russia was on its way to filling a major capacity gap that emerged during the 2008 Russo-Georgia conflict; namely, a significant lack of amphibious assault capability.

During the short conflict, Russia deployed three ancient landing ships with a combined displacement of over 8,000 tons to the Black Sea, landing troops in the uncontested port of Ochamchire in the Russia-friendly breakaway province Abkhazia. Not only was it an unopposed landing, but their ground vehicles arrived by rail, indicating minimal capabilities to move them by landing ship.

In the decade since, Russia has made several moves to remedy this inability to deploy little green men and little green tanks ashore with minimal success. Russia originally planned on using for two sweet French Mistral Amphibious Assault ships purchased back in 2011 to fill this gap. The deal was so far along that Russia sent naval crews to France for training on the new vessels. But following a bout of Russian aggression in eastern Europe, France opted to not sell warships to the newly-aggressive Moscow, leaving the latter without an efficient way to invade small countries by sea despite examining several alternatives.

Despite this setback, Russian shipbuilding player Nevskoye Design — known for designing the Kirov-class nuclear-powered battlecruiser among other things — has recently laid out a proposal to build a universal landing ship (UHL) for the Russian navy, a major step towards actually laying down a keel for a mobile drydock.

This helicopter carrier, which will be able to service a pile of helos, air cushioned hovercraft, and traditional landing ships, will also be able to facilitate the transport of a large number of Russian troops to shore while handling the logistics of keeping those little green men going until Victory Day. Extrapolating from Universal Landing Ships of similar size, it would be able to haul around 500 troops and their tanks and APCs. Not too shabby.

Details on the final design for the new vessel are scant, and the images released so far are either models of the Lavina UHL or derived from a Soviet-era UHL proposal. Both of those mockup designs do share similarities, and the recent UHL proposal may end up resembling a slightly larger version of the Japanese Defense Forces’ Hyūga-class helicopter destroyer, boasting a displacement of 30,000 tons versus the Hyūga’s 19,000.

Either way, the new UHL appears to be designed to work in conjunction with the smaller, brand-spanking new Ivan Gren landing ships that displace 6,600 tons. The combination of the Ivan Grens and the proposed UHL would give the Russian navy a significant expeditionary amphibious capability, one that was not present when the Russian navy blockaded tiny Georgia in 2008.

With Russia’s recent overseas adventurism heating up, it seems like a prime time for the Russian ministry of defense to invest in transport capacity. The only thing holding Russia back from building the shiny new surface vessels has been the tenuous economic position it finds itself in thanks to said overseas adventurism. Since 2014, Russia has had trouble accessing certain energy markets, which is a huge blow to the gas-powered Russian economy. The country has also been blocked from using global financial markets under new sanctions, sanctions which caused Moscow’s defense budget to contract by 17% from last year.

Despite sanctions and budget cuts, Russia has steamed ahead with its military modernization program, which has included massive upgrades and refits for surface vessels, and the launch of new surface combatants like the stealthy Gorshkov-class frigate. It’s easy to write this proposal off as a pipe-dream, but an amphibious assault ship has been a huge priority for the Russian navy for about a decade, and something has to transport those ancient T-72s to the Middle East.