How Russia Is Slowly, but Surely, Modernizing Its Entire Navy 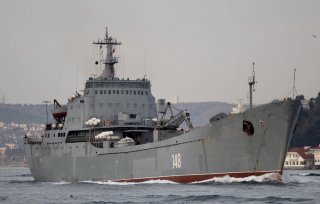 Key point: Moscow is serious about projecting power and protecting its shores. That means doubling down on existing warships and not building new expensive and large ones.

The Russian navy on Aug. 14, 2019 completed a key test of an upgraded missile corvette. The trial underscores the evolution of the Russian fleet from a force dominated by a few large vessels to one with a larger number of smaller ships.

"Today, in accordance with the plan of shipbuilders’ trials, the modernized small missile ship Smerch has held a series of missile firings against a naval and an air target," the press office told TASS.

Smerch, a Nanuchka III-class corvette, displaces around 500 tons of water. Smerch launched in 1984.

Smerch is one of around 150 corvettes, patrol boats and mine-warfare ships in the Russian fleet. Each displaces just a few thousand or few hundred tons of water. The Russian navy operates fewer than 30 large, oceangoing frigates, destroyers and cruisers.

The U.S. Navy by contrast operates just a couple dozen small surface combatants and more than 100 large ones. The American and Russian fleets are opposites, each reflecting their country’s strategy, history, industry and geography.

The U.S. fleet, backed by a powerful, high-tech industry, favors large ships for their ability to deploy long distances in support of an interventionist foreign policy.

The Russian fleet, on the other hand, relies on outdated shipyards that reliably can produce only small vessels. Fortunately for Moscow, smaller ships are appropriate for Russia’s strategic focus on destabilizing, and occasionally invading, rivals just a short distance away along its own periphery.

The Russian navy’s transformation into a small-ship fleet has been accelerating. More large ships are decommissioning and smaller vessels -- both new and upgraded -- are taking their place, reshaping what was once a major global force into a new kind of regional fleet.

In April 2019 the Kremlin decided to dismantle rather than revamp two Cold War-vintage Kirov-class battlecruisers. Moscow likewise considered scrapping its sole aircraft carrier Admiral Kuznetsov rather than pay for maintenance and upgrades.

The accidental sinking of the PD-50 drydock in October 2018 weighed on the decision. PD-50 was the only drydock in northern Russia that could accommodate Kuznetsov. The Kremlin in mid-2019 signaled it will attempt to repair the aging carrier after combining two smaller drydocks to accommodate the vessel.

The new ships Russia is acquiring generally are missile corvettes displacing no more than 5,000 tons of water. An American destroyer, by contrast, displaces 9,000 tons.

The Kremlin bought just four new warships in 2018, all corvettes. While small, these vessels pack serious firepower. In recent years, corvettes from the Caspian Sea fleet have fired long-range Kalibr cruise missiles at targets in Syria -- all without ever leaving Russian waters.

But the numbers are telling. As it transforms, the Russian navy by most metrics is falling behind the U.S. and Chinese navies. In 2019 the Russian fleet has 360 ships, according to U.S. Navy commander Keith Patton, writing for the Center for International Maritime Security. The Chinese fleet, by contrast, possesses 624 warships.

Perhaps most tellingly, the U.S. fleet can carry around 12,000 offensive missiles. Chinese ships in total can carry 5,200 missiles. Russia’s fleet, despite upgrades like those to Smerch, packs no more than 3,300. And that number could fall as more large, old warships decommission and smaller ships take their place.