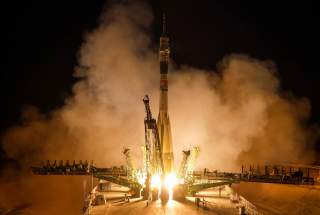 Key point: When the critical national-security assets that will help protect American into the future are launched into space, the only label we want to see on the side is one that says “Made in the USA.”

From the Arctic to Afghanistan, Vladimir Putin’s Russia is a clear threat to U.S. national-security interests. At every turn, Russia enjoys being a foil to the United States. In recent years, the list of Moscow’s aggressive actions that counter U.S. interests have included: invading and occupying portions of Georgia and Ukraine; meddling in U.S., German, French, British and other elections; shooting down Malaysian Air Flight 17; poisoning dissidents on UK soil; conducting dangerous and threatening military maneuvers at sea and in the skies; and bolstering dictators Bashar al Assad in Syria and Nicolas Maduro in Venezuela, to name a few.

The current political mood aside, Washington has consistently taken significant actions and enacted policies to squeeze the Russian government. To give the Trump administration credit where it is due, its policy responses to Russian actions have been strong—putting us in arguably the most aggressive policy posture towards Russia since the end of the Cold War.

One additional future squeeze that could be employed is for the United States to end its reliance on Russian rocket engines to launch critical national-security assets into space.

Space, of course, is a critical domain for the United States military, U.S. intelligence services, and the U.S. economy. Our military uses assets in space for communications and command and control. The U.S. intelligence community collects signals and geospatial intelligence from space. And our economy relies on space for critical applications in most Americans’ daily lives, such as Global Positioning System (GPS).

America’s adversaries—namely Russia and China—have militarized and contested space so we must act to protect our interests and mitigate potential threats in this critical domain.

Russia’s threats to America’s space interests, in particular, are multi-dimensional. The Russian military and space agency are actively pursuing the development and deployment of anti-satellite weapons, have been caught spoofing and have put into orbit satellites that appear to have hostile capabilities. Putin has even stated in the past that space weapons are more “acceptable in the political and military respect.”

Few Americans are likely aware that, even today, the United States Air Force uses a rocket-powered by a Russian rocket engine to launch critical national-security assets to space. By law, however, the Air Force must cease using launch vehicles with these RD-180 engines by December 31, 2022. Congress smartly directed the phase-out of this engine and its replacement with a fully American capability to reduce this dangerous reliance on an adversary.

The U.S. Air Force is currently in the process of selecting two providers with American-made launch vehicles to supply national-security launches for most of the next decade. Known as the Phase 2 Launch Service Procurement, this acquisition is highly consequential and will have profound implications for national security and space launches.

Media reports have indicated that recent developments could potentially extend the use of Russian rocket engines until at least 2024, if not beyond. The provision in question allows bidders to offer an “alternate launch vehicle”—essentially a backup—if their primary launch vehicle is not ready to fly by 2022, when the Air Force intends to conduct missions. The only “alternative vehicle” option would be the rocket which has a Russian-made engine.

Instead of introducing new loopholes into the process that allows the continued reliance on the Russian engines, the Air Force should execute what Congress intended in pushing for an American-made option that doesn’t rely on the Russians, who have demonstrated time and again a hostility to U.S. interests. The United States already has alternatives to the Russian-powered rocket that are certified and already flying these payloads to space.

The United States should not wait one day longer than we must ensure we can safely get our critical national-security assets into space. Further delay only strengthens Putin’s hand and undermines our own security.

When the critical national-security assets that will help protect American into the future are launched into space, the only label we want to see on the side is one that says “Made in the USA.”