How a Russian Submarine (Armed with Nuclear Missiles) Fatally Exploded 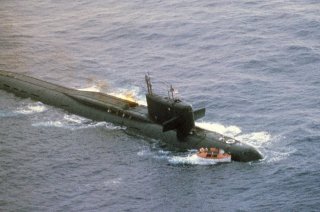 Service on board a submarine is one of the more dangerous military occupations, with any accident or mistake potentially proving both catastrophic and deadly. That submarine service can be potentially hazardous is highlighted by the fact that the danger remains high even during regular peacetime patrols. The crew of one Cold War Soviet submarine learned this the hard way.

Much like the United States, the early years of the Cold War saw the Soviet Union begin to experiment with ballistic missile submarines out of a desire to ensure the maintenance of a survivable second-strike nuclear weapons capability. Soviet design efforts for a new ballistic missile submarine beginning in 1958 experienced significant issues – particularly with the missile launch system – and the changes made to the design in order to correct these problems were so extensive that the program’s designation was changed to 667A.

The resulting Soviet 667A – codenamed Yankee I by NATO – nuclear-powered ballistic missile submarine (SSBN) was the first Soviet SSBN that was roughly on par with its American counterparts. The 667A was designed to minimize external resistance while operating below the surface and was built with noise-reduction in mind, including the use of a sound-absorbing rubber on the pressure hull and antihydroacoustic coating on the external hull. The 667A was equipped with topline Soviet navigation and battle management systems, and the vessel’s two self-contained propulsion units gave it a maximum speed of 27 knots while submerged.

The 667A was equipped with the D-5 launch system and carried a total of 16 R-27 submarine-launched ballistic missiles (SLBMs), each of which had a maximum range of 2400 km. Between 1972 and 1983, 667A SSBNs were re-equipped with the upgraded D-5U launch system and the R-27U SLBMs, which had a greater maximum range of up to 3,000 km and which carried multiple reentry vehicles. These upgraded vessels were designated the 667AU.

In October 1986, the 667A-class SSBN K-219 – while on a cruise roughly 600 miles off the coast of Bermuda – suffered an explosion and subsequent fire in its number 6 missile tube. The likely cause was a leak that allowed seawater to enter into the missile tube, which caused rocket fuel chemicals to enter into the tube. As a result of the explosion, the missile and its warheads were ejected into the sea. The ship’s commanding officer and its crew attempted to salvage the vessel and prepare it for towing with the help of a Soviet freighter, only to have the towing cable snap during recovery efforts. The commanding officer ordered the crew to abandon ship, and the vessel was lost.

The incident caused a stir among the Soviet leadership, with General Secretary Mikhail Gorbachev questioning not only the competence of K-219’s crew but also the idea that the incident was purely accidental; Gorbachev reportedly questioned whether or not the incident could have been the result of American sabotage, while the idea that K-219 had collided with an American submarine – which the vessel’s commanding officer categorically denied – was also floated around.

Soviet leaders were also concerned that the United States might successfully recover the wreckage of K-219 and loot its codebook and other technological secrets. These concerns likely stemmed from the CIA’s successful recovery of a sunken Soviet submarine – along with a trove of intel regarding Soviet undersea capabilities – in 1968.

The story of Soviet submarine K-219 demonstrates just how hazardous submarine duty can be, even during a routine peacetime patrol.