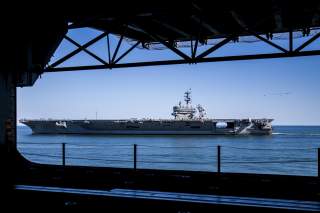 Early in the morning of August 10, 1941, three boxy Soviet TB-3 bombers took off from the airbase at Yevpatoria in the Crimean Peninsula, bearing a most unusual cargo under their gargantuan wings: two manned, stubby-nosed I-16 fighter planes, their Shvetsov radial engines chortling and propellers spinning to help propel the sluggish four-engine TB-3s they were attached to.

One of the aircraft-carrying motherships had to abort mission due to technical problems. The six remaining aircraft assumed an eastward course across the Black Sea towards the Romanian city of Constanta roughly 250 miles away, cruising at roughly 155 miles per hour.

Six weeks earlier, Romanian troops had joined Nazi Germany in a surprise invasion of the Soviet Union that had steamrolled unprepared border defenses. As Axis forces steadily advanced towards the critical Soviet ports of Odessa and Sevastopol, the beleaguered Soviet Air Force and Navy did their best to strike back. One key target was the King Carol I bridge spanning the River Danube, which measured over a miles long and up to seventy meters high, and also stood over a vital pipeline connected to the Ploesti oil fields.

Soviet DB-3 bomber had repeatedly attacked the bridge with high-altitude horizontal bombing runs without landing any hits. The older, slower TB-3s themselves would likely have fared little better had they tried.

But these special TB-3s, called Sveno (“Link”)-SPBs, were not carrying any bombs at all. Instead, the I-16 Type 24 fighters braced under the bomber’s wings each carried two 250-kilogram bombs.

Ordinarily, an I-16 loaded with nearly third of its weight in bombs could not have taken off, let alone have possessed the range for a round-trip mission across the Black Sea. But these I-16s were drawing on the fuel supply of the TB-3 bombers they were latched onto.

The Sveno-SPBs were the ultimate product of a decade-long research program run by designer Vladimir Vakhrimov, who experimented with numerous ways to mate ‘parasite’ fighters onto bombers to extend their range and payload, as described in a companion article.

This was the second raid undertaken by Shubikov’s Circus, as the 2nd Special Squadron of the 32nd Fighter Regiment was known. The first on July 26 had taken the Axis defenders by surprise and resulted in the destruction of an oil depot. But the Soviet raiders were unlikely to benefit from surprise a second time.

At 5:50 AM, as the TB-3 pilots flew within nine miles of the Romanian coastline, they flipped a switch and yellow light flashed next to the cockpits of the I-16s. Seconds later, the fighter pilots released the latches clamping their I-16s to their motherships.

The bomb-laden fighters surged towards the bridge and then from slightly over a mile high, nosed down at a near ninety-degree angle, causing them to accelerate to nearly four hundred miles per hour.

The bridge’s defenders were on alert, as described by I-16 pilot Boris Litvinchuk in The Angry Sky of Tauris by fellow aviator Vassily Minakov.

Squalls of fire shot up towards the heavily loaded warbirds. Automatic guns bristled with fire from both sides of the Danube, from the islands, from the special cradles suspended from the trusses of the bridge, even from the tops of the seventy-five-meter-high spans . . . Nevertheless, the I-16s broke through to fly directly above the bridge. It raced towards them . . . just four hundred meters away. Bombs came rushing down . . .

A direct hit in the central span! A gigantic steel span breaks like a giraffe’s neck, and plunges into foaming water. Burning oil gushes out of a broken pipeline under the flooring, a continuous flame raging downstream on the water . . .

All four I-16s escaped unscathed and landed and refueled at Odessa at 6:40 AM, where they were promptly redirected towards an incoming formation of Ju-88 bombers headed for the Soviet port city. The Junkers dumped most of their bombs in the sea and belted for home, and Shubikov and his comrades then rejoined their TB-3 motherships at their home base in Yevpatoria.

Three days later a strike by three Zveno-SPB’s scored five direct hits, destroying one of the bridge spans completely. On their return flight, the I-16s nosed back down to low altitude to strafe assembling Romanian infantry at Sulina.

The same day, the SPB’s designer Vladimir Vakhmistrov requested diverting additional TB-3 bombers to Shubikov’s Circus. The unit received two. However, Stalin personally ruled against further reinforcement: the TB-3 was out of production, and the Sveno used a rare, late-model variant with higher-power AM34 engines that were urgently needed for transport duties.

Still the Axis war machine ground closer and closer to the Crimean Peninsula, and the unit specialized in long-range strikes was increasingly thrust into frontline ground support roles. Even though range became less of a problem, the unit still depended on the TB-3s to lift the bomb-laden I-16s into the air.

By September 8 the unit was hitting a bridge crossing at Berislav only one hundred miles away, covered by Yak-1 fighters when it was bounced by German fighters. A Yak and I-16 went down in flames. The following day, four I-16s of Shubikov’s circus claimed two 109s in a swirling dogfight following another raid. This was quite an achievement as the Bf 109 was much faster and more heavily armed than the I-16, though not quite as maneuverable.

Finally, on October 1, Shubikov’s luck ran out on October during a raid striking German heavy artillery at Ishun that was bombarding Soviet troops defending Perekop—one of the narrow land bridges connecting the Crimean Peninsula to Ukraine. The unit leader was shot down by enemy fighters, and posthumously awarded the Order of Lenin. Odessa fell later that month.

Apparently, the 2nd Special Squadron continued flying sorties into 1942, totaling thirty combat mission altogether. The Zveno-SPBs were finally withdrawn, ostensibly due to their vulnerability to enemy fighters, as well as the fact both the TB-3 and I-16 were outdated, out-of-production airframes.

Vakhmistrov had invented an ingenious solution to squeezing longer range out of increasingly outdated aircraft—but his idea was decisively overtaken by the advent of more advanced airplanes. New twin-engine Pe-2 and Tu-2 bombers were faster, could carry much heavier payloads, and had longer-range than the I-16 and were sufficiently maneuverable to perform dive-bombing attacks.

However, Vakhmistrov was farsighted in seeing the inherent potential of using larger planes to keep smaller but more agile fighters airborne over longer distances. While the parasite fighter may have amounted to a blind lead, jet fighters today routinely “dock” with airliner-like tanker planes to multiply their operational radius several times over.