How Russia's Military (And Many Others) Could Hack Your iPhone 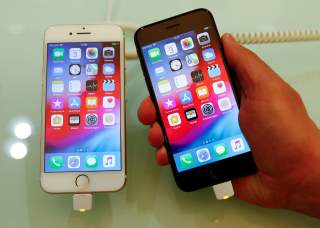 Be careful of that message coming over your cell phone. Instead of your family or friends calling, it could be the Russian military.

Or at least that seems to be the idea behind Russia’s new drone-based electronic-warfare system. The Leer-3 RB-341V combines jammers and Orlan-10 unmanned aerial vehicles to disable cellular networks, and allow the Russian military to send fake messages to subscribers.

“The Leer-3 UAV can effectively turn into a ‘virtual cellular station’ by sending messages and totally controlling a subscriber’s devices once it replaces a base station,” according to the U.S. Army’s Foreign Military Studies Office (FMSO), which translates Russian media reports. “If it manages to take the place of a cellular communications tower, it can also send audio messages and small video clips to subscribers.”

The Leer-3 RB-341V was used in Syria to send instant messages to rebel factions, containing application forms for an armistice, said Lt. Gen. Sergey Kuralenko, the Chief of the Center for the Reconciliation of the Opposing Sides in Syria.

“It thus appears to have some psychological warfare mission implications, if it can do all of these tasks,” the FMSO notes. “The Leer-3 can reportedly block enemy mobile telephones while simultaneously not impeding the operation of friendly mobiles phones. The systems can collect telephone numbers and call these numbers while blocking other people’s signals. It may also be able to remotely connect user devices as well.”

According to a TASS news agency article translated by FMSO, “The Leer-3 complex is composed of three Orlan-10 UAVs and a command and control post on a KamAZ-5350 truck. The unmanned aerial vehicles’ primary mission is to suppress cellular communication towers. To do this, special ‘jammers’ have been installed onboard the Orlan-10 UAVs, and also disposable jammers, which they drop onto the ground. Having jammed the base stations, the old Orlan-10 UAVs were able to send instant messages to subscribers under certain conditions…But the new flying drones can easily handle those targets. They ‘jam’ base stations and take their place, while becoming virtual cellular stations.”

The initial Leer-3 systems, which were deployed in 2015, were designed to disable Global System for Mobile Communications (GSM) cellular networks. “But until recently, the complexes were not always capable of working with networks where 3G and 4G generations of information transmission technologies are being used,” TASS reported.

In addition to Syria, the Leer-3 has already been spotted in the Donbass region of Ukraine.

Russia isn’t the only nation using cellular networks as battlefields. Israel, for example, rings target sites in Gaza to give innocent civilians time to escape before a smart bomb arrives. But Russia’s use of UAVs raises interesting possibilities, including sending drones to hijack communications deep inside enemy territory.