How Serious Are Putin’s Nuclear Threats? 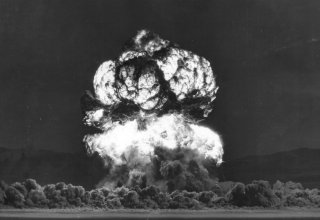 Following a number of Russian nuclear threats, many observers have wondered: is Russian president Vladimir Putin suicidal? Is he really willing to let his entire country be incinerated by nuclear weapons? Does he have an elaborate underground bunker where he is willing to go while his country burns?

While many say that Putin remains a rational actor in many respects, despite being capable of unthinkable brutality, some suggest that there have been recent “shifts” or “changes” in his approach or temperament. Others say he has simply gotten bad information.

Consider this: Perhaps Putin is not suicidal, but is obsessed with consolidating his power and making Russia great again. Therefore, when Margarita Simonyan, editor of state broadcaster RT, says Putin is in fact likely to fire nuclear weapons, one has to consider her comments as part of a decided strategic attempt to keep NATO at bay.

“Either we lose in Ukraine, or the Third World War starts. I think World War III is more realistic, knowing us, knowing our leader,” Simonyan said, according to Yahoo! News.

Indeed, if Putin’s continued “nuclear” threat is part of a calculated effort to deter NATO from becoming more directly involved in Ukraine’s defense, it appears to be working. While the U.S. Department of Defense is clearly stepping up its support for Ukraine’s defense with heavy equipment and sharpening its rhetoric against Russia, it is also being careful to avoid sparking World War III and avoid any direct U.S.-NATO confrontation with Russia.

Yet Putin also has reason to be wary of these risks. The resolve and readiness of the U.S. nuclear triad are well-established in the minds of Russian leaders and defense planners. Moscow knows that any nuclear attack could result in its destruction, as the United States has a number of nuclear delivery systems, including Minuteman III intercontinental ballistic missiles, nuclear-armed aircraft such as the B-52 and B-2 bombers, and Ohio-class submarines, that stand ready to initiate Armageddon.