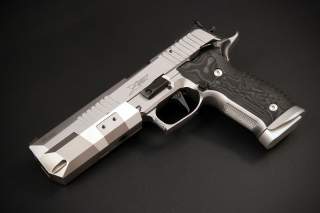 One of the largest manufacturers of firearms in America is a European company with annual sales of well over half a million guns a year. Pistol maker Sig Sauer has earned a loyal following by selling strong, durable, and reliable handguns to law enforcement, the U.S. military, and firearms enthusiasts nationwide. In 2017, the company’s new P320 handgun won a coveted contract to supply hundreds of thousands of pistols to the U.S. armed forces.

Sig Sauer, often known simply as Sig, is a Swiss-German company that traces its roots to the mid-nineteenth century. Founded in 1853, the Swiss Schweizerische Industrie Gesellschaft, or SIG, was well known for well-made, accurate firearms but could not export them abroad due to Swiss law. Sig sought a workaround to bypass these laws and ended up partnering with German arms maker J. P. Sauer und Sohn GmbH. Founded in 1751, Sauer had considerable firearms experience on its own. The result was Sig Sauer.

Sig brought the world-famous P210 to the partnership, a decision that would have far-reaching consequences for the company. In 1937, Sig had purchased a number of patents granted to French firearms designer Charles Petter and used them to design a replacement for the famous Luger P08 in Swiss Army service. In addition to Petter’s innovations the weapon used a locked breech, short recoil pistol operating system devised by John Browning and used by almost all pistols in production today.

Adopted by the Swiss Army in 1949, the Sig P210 is generally considered one of the best-designed pistols of the 20th Century. The P210 was chambered in nine millimeter Luger and took an eight-round magazine. The P210 was known for accuracy, in part because it was the first handgun to run the slide inside the pistol frame. Despite its high quality it never quite caught on, due to its high cost and a lack of market visibility. The P210 was used by the Swiss Army, Danish Army, and West German Border Guard.

In the 1970s Sig set about creating an updated version of the P210, the P220. Like its predecessor the P220 was an all-steel firearm. The P220 however was designed with ease of production and cost in mind, and weighs six ounces less unloaded than its predecessor. The P220 was designed as a double action firearm with a decocking lever on the left side of the frame that safely lowered the hammer on a chambered round. An automatic firing pin lock restricts the firing pin from going forward unless the trigger is pulled.

The Sig P220 was adopted worldwide by a wide variety of armed forces, from native Switzerland to Japan, Chile, Iran and Nigeria. The P220 was the first of Sig’s firearms sold commercially in the United States. Still in production, the P220 is offered in 9-millimeter, .45 ACP, and 10-millimeter Auto.

In 1979 the U.S. Army kicked off a competition to replace the Pentagon’s myriad of handguns with a single pistol. In response, Sig Sauer introduced the P226. The P226 was much like the older P220 but with additional features required by the competition such as a larger 15-round magazine and an ambidextrous magazine catch. The Joint Service Small Arms Program (JSSAP) trialled several of the latest handguns--along with the venerable Colt M1911A1—and then trialled them again in 1984. Although the P226 in many ways did as well as the ultimate winner of the competition, particularly in terms of reliability, it lost on a cost basis. The P226 was later adopted by U.S. Navy SEALs as the Mk.25 handgun.

Sig Sauer has enjoyed steady growth since the 1990s. The P226 became a popular law enforcement firearm with spillover appeal into the civilian market. The P226 was followed by the compact P228 and P229. The company also expanded its caliber lineup from nine millimeter Luger to .380 Automatic, .40 Smith & Wesson, and .45 ACP, while retaining the original core features that gave Sig a reputation for accuracy and quality.

Sig is the most successful gun importer in the United States, beating even Glock. In 2016 the company was the fourth largest gun seller in the United States, trailing American brands Smith & Wesson, Ruger and Remington. The company sold 633,533 firearms in 2016, up twenty seven percent over the previous year. The majority of Sig firearms sold are handguns, with 581,807 sold in 2016.

In January 2017 Sig Sauer’s P320 beat Glock, Beretta, and other competitors for the U.S. Army’s M17 Modular Handgun System. The P320, although outwardly similar to other Sigs, different internally in doing away with the longstanding hammer and firing pin system of operation and replacing it with a double action, striker-fired operating system. The pistol, in nine millimeter Luger, will replace the Beretta M9 with a full-sized M17 version and compact M18 version. The M17 is filtering out to Army units now, in May of 2017 was accepted for service by the U.S. Marine Corps, Navy, and Air Force.

Given the company’s history, it’s clear why Sig Sauer has become one of the most popular gun brands in America. The company started with a foundational good design, the P210, and updated and expanded the product line to offer multiple options to consumers. The company built up a reputation for reliability and expanded into the striker-fired market when it was time. Already the third largest handgun seller in the United States, adoption of the P320 by the U.S. Armed Forces will only increase Sig’s popularity in the decades to come.

Kyle Mizokami is a defense and national-security writer based in San Francisco who has appeared in the Diplomat, Foreign Policy, War is Boring and the Daily Beast . In 2009, he cofounded the defense and security blog Japan Security Watch. You can follow him on Twitter: @KyleMizokami.