How Significant is Chinese Cooperation with Russia? 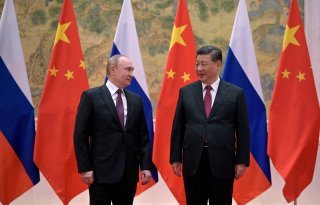 While the world is focused on a potential Russian invasion of Ukraine, the Pentagon is keeping a close eye on China as well.

Secretary of Defense Lloyd Austin said he is concerned about what he called China’s support of Vladimir Putin’s recent actions.

“We did note, with alarm, China's tactic approval of Putin’s activities here in the region,” Austin said during a press conference in Brussels on Thursday.

Austin said he can’t speak “to the strength of (the Russia-China) alliance,” but said recent events raise important questions. He said the United States will continue to monitor the relationship between Russia and China moving forward.

The Russian and Chinese militaries have held meetings and joint exercises, but the interests of the two countries do not fully align. China’s primary interest, at least at the moment, looks eastward off its shores toward Taiwan. Russia’s near-term focus appears to face westward toward Ukraine and Eastern Europe. Russia and China share a long border region, but China places greater attention on its shared border with India.

However, China and Russia remain authoritarian regimes with shared hostility towards the United States and ambitions to expand outward. China may agree to stay silent, neutral, or even supportive of a Russian attack on Ukraine, if Russia agreed to endorse or offer approval to a Chinese annexation of Taiwan.

There are relatively few areas where Russian and Chinese interests might collide. Russia is unlikely to challenge the United States and China in the Pacific, given its smaller navy. Both countries, however, likely share a desire to expand influence and strategic advantages on the African continent and in Middle East.

There are certainly many unknowns, yet it is apparent that neither Russia nor China publicly airs out tension or disagreement with the other. By contrast, the two are publically demonstrating some measure of cooperation. However, it would be surprising if this cooperation would in any way lead China to any kind of military intervention in support of Russia in a conflict.