How This Smart Gun Makes Anyone an Expert Shooter 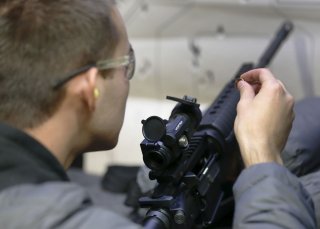 Key point: The rifle's computer can help you aim. Here's what we know.

Durng the 2014 Consumer Electronics Show, firearms-manufacturer TrackingPoint announced an AR-15 version of its computer-controlled precision rifles. The company claims that the new weapon can hit moving targets “out to five football fields away.” And anyone can use it.