How South Africa Built Nuclear Weapons (And Then Gave Them Up) 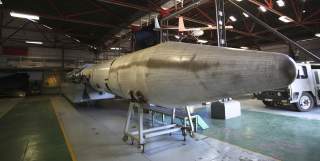 Apartheid-era South Africa had all the qualities necessary for a secret nuclear weapons program: an authoritarian government, a hostile international climate, a large and inventive arms industry and abundant deposits of uranium ore.

The former Dutch colony at the southern tip of Africa took a decidedly different turn from the path other Western nations forged after World War II. In 1948, the same year President Harry Truman ordered the desegregation of the American military, the National Party won power in South Africa. As in the Communist takeovers in eastern Europe taking place, the National Party took power by a narrow margin then and swiftly imposed its radical white-supremacy rule on a colonial but diverse society.

That same year the new government established an Atomic Energy Board to manage the development of nuclear energy. A decade later in 1957, under its “Atoms for Peace” program, the Eisenhower administration agreed to supply to South Africa a forty megawatts research reactor and nuclear fuel. That is how the Pelindaba Nuclear Research Center came to exist in 1961; not long after it was created, the center began a secret uranium-enrichment program.

Acquiring fissile material is half the nuclear secret. The other half of the secret is that nuclear weapons actually work. (The United States spent the money and manpower to get the first and prove the second. Other powers just need the first.) Separating the minute amounts of fissile Uranium 235 from Uranium 238 is a key step in fissile material production. Uranium can be combined with fluorine to create the chemical uranium hexafluoride, a toxic, corrosive, heavy gas. This gas can be forced through a very long series of filters or sieves that separate the lighter U-235 from the heavier U-238. Diffusion plants are the size of auto factories and consume more electricity—they’re hard to hide.

Centrifuge diffusion—made famous by Iran’s nuclear enterprise—uses centrifugal force to separate out U-235 from U2F6. A spinning rotor hurls the gas molecules away from its central duct, sending the heavier U-238 atoms to the cylinder walls and the U-235 out an axial tube. Gas centrifuges are much more compact and their installations harder to spot than gaseous-diffusion plants.

The South Africans chose a technique unlike the gaseous-diffusion or gas centrifuge separation methods. Vortex diffusion resembles gas-centrifuge separation but instead of a spinning rotor a near-supersonic jet of gas swirled in a stationary cylinder to force the U-238 out to the sides. The vortex separation method proved both less efficient and more costly than conventional methods, which made the result in weapons-grade uranium very dear indeed.

But for apartheid South Africa cost was no object in the path to autonomy. Beginning in the early 1960s the regime came under increasing international isolation for its racist practices. The South African nuclear program ostensibly focussed on power generation and “peaceful nuclear explosives” (PNEs) for mining and demolition, it was always guided by geopolitics. As a major uranium producer South Africa needed only an indigenous enrichment program to acquire bomb fuel.

The “Y-Plant” uranium-separation plant—solely intended for weapons-grade production—began construction in 1970 and produced its first highly-enriched uranium (HEU) in 1974. In 1971 the Minister of Mines authorized research into PNEs. In 1974 Prime Minister Vorster secretly authorized the development of PNEs. India’s successful test that year of its own PNE solidified both public and private rationales; the Indians always intended a weapon, and so did the South Africans. As Carey Sublette of the Nuclear Weapons Archive writes,

“The fact that South Africa conducted this work in secret from the outset, making its existence public only when further secrecy was infeasible and never submitted this program to international safeguards from its inception until 1991 is incompatible with South African claims of original peaceful intent during its early period.”

The mid-1970s accelerated events in Southern Africa. In 1975 Portugal withdrew from the African colonies it had held for five centuries, leaving Marxist insurgencies eager to join the Soviet orbit. This external threat coupled with its growing isolation from its Western allies, hardened South African resolve to get the bomb. In 1976 U.S. concern about South African nuclear activities stopped nuclear fuel shipments. America’s concern at the time was less with apartheid and more with nuclear proliferation.

The 1970s also saw a growing relationship between South Africa and Israel. After the United States was cutting off nuclear supplies to South Africa, the country normalized relations with Israel and began a close nuclear cooperation whose nature and details are still murky. It is known that during 1977 and 1978 South Africa supplied Israel with some six hundred tons of uranium, some in exchange for thirty grams of tritium gas—H-bomb fuel.

By 1977 a test site was under construction in the Kalahari Desert. Like other nuclear test sites the Vastrap military base housed a landing field, barracks, labs, shelters and a two shafts drilled into the desert rock. What Vastrap didn’t have was any kind of camouflage, which is very odd. The Soviets found Vastrap with their recon sats and relayed their find to the Carter administration. Huge pressure from the United States, the USSR and France forced the closure of the test site for a decade.

In 1979 a U.S. Air Force reconnaissance satellite, part of the Vela constellation of nuclear explosion detectors, spotted a mysterious flash in the southern Indian Ocean near some remote South African islands. Publicly, although the Vela sat seemingly detected what it was designed to detect, the U.S. government declined to declare this event a secret nuclear test. Decades later this response appears at odds with the conclusions of American weaponeers.

During the 1980s, as international opinion turned against South Africa’s domestic policies, work continued on the nuclear program. A send gaseous diffusion plant was constructed but failed to meet its designed output. Armscor (now Denel, Ltd.) the state armaments firm, established a bomb building facility close to the capital Pretoria, where explosive implosion, bomb components and health physics were handled.

By 1982 South Africa had built three nuclear devices: an unnamed test unit for “cold-testing” (using low-fissile U-238) reputed to weigh three tons, a true test device named “Melba” or “Video” less than half the weight of the first, and its first “G.I.-proof” weapon “Hobo” or “Cabot.” These gadgets were shaped by South Africa’s unusual deterrence policy.

In its first phase the nation would, like Israel, maintain “strategic ambiguity” by neither confirming nor denying its possession of the bomb. If South Africa faced imminent threat from its neighbors or the USSR, in the second phase allies like the United States would be secretly informed of the nuclear deterrent. If after the secret reveal the United States and its allies failed to help South Africa, a demonstration detonation of the weapons would take place. Unmentioned is Phase Four: the field use of nuclear weapons on military targets.

A a result of this “Dance of the Seven Veils” strategy the South African bombs had a large element of prop-making. Like the first U.S. bomb Trinity, the first South African devices were crude, but perhaps deliberately so. The six bombs eventually added to the South African arsenal were long thought to have been clunky things suitable “for getting kicked out the back of a plane” in one account’s words. The only public photos of the South African nuclear bomb casings do indeed show bombs the size of trash cans and likely heavy as SUVs.

But in a recent blog post Jeffrey Lewis questions this assumption. Lewis sizes up Nic von Wielligh’s revelations and concludes the operational bombs were no props but small, lightweight devices deliverable by glide bombs (gravity bombs fitted with wings) and possibly by ballistic missile if the South African HUSKY project had finished before the end of apartheid. Phase three would have been a nasty surprise for the nuclear club as well as the intended targets.

So what happened to South Africa’s bombs?

With the triumph of Nelson Mandela’s long fight and the end of apartheid approaching, the whole program was dismantled and soon made public. Was this done to deny the coming black majority government the nuclear weapons South Africa had so laboriously acquired? Or was it due to the changing currents of international relations, which once required a calculated performance and now required a denuclearized future? Likely both are true. A quarter-century after Mandela’s victory South Africa at least need not worry about hiding and fighting the bomb.

Steve Weintz is a frequent contributor to many publications such as WarIsBoring, is a writer, filmmaker, artist, animator.