How South Africa Overcame Its Very Own January 6 Insurrection 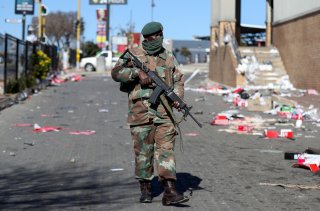 On January 6 this year, the world looked on in horror as thousands of people stormed the U.S. Capitol in Washington, DC, the home not just of U.S. democracy, but of an inspiration to democracies the world over.

In the United States, that lie was fomented by a soon to be former president—that the election that had unseated him had been stolen. In South Africa, the lie was that the former president was being jailed without trial, ignoring that he had chosen not to appear before the commission or give the apex court any reasons why he should not be jailed when he was eventually convicted of contempt of court.

Jacob G. Zuma’s supporters immediately started agitating for his arrest, openly inciting insurrection as they vowed to close the country down. Zuma went to jail, eventually, at midnight on Wednesday, July 7. By that Saturday night, thirty-five trucks had been destroyed by firebombs at a toll plaza on the main supply route between Durban, Africa’s busiest port, and Johannesburg, the country’s economic heartland.

By Sunday, the looting began. This was the second lie. The people who were looting were not doing so because they had been incensed by the jailing of a self-proclaimed people’s president, but because they were hungry and desperate, battered after months of one of the harshest Covid-19 lockdowns in the world, in a country that could ill afford the crushing effect on its already faltering economy.

By Monday, as several well-off South Africans opportunistically decided to use the anarchy to benefit themselves, while other looters appeared strangely organized with light delivery vehicles to load their loot into, we saw the third lie. This unrest wasn’t only about poverty in a country with historically high levels of joblessness and the highest youth unemployment rate in the world—this was about lawlessness and impunity, something that Zuma’s administration had normalized and now weaponised.

By Tuesday, many of us were beginning to lose hope as infrastructure began being targeted; cell phone towers destroyed, community radio stations robbed of their equipment, schools torched, and major economic distribution and warehouse centres ransacked and burnt to the ground. We heard reports of people being dropped off at certain places, with petrol to start the fires. This was the fourth and final lie; what we were seeing was not a popular uprising fuelled by anger and hopelessness, but an insurrection with only one aim—to upend our internationally acclaimed constitution, destroy the rule of law, and unseat the government. This was not being done for the poor of South Africa, but to escape being held accountable for their own acts of corruption and state capture—and then benefit economically from the chaos.

What none of them, the criminals, the terrorists, the opportunists or the desperately poor, had foreseen were ordinary South Africans standing up and saying “not in my name.” As the chaos threatened to destroy the provincial economy of KwaZulu-Natal and bring the economic powerhouse of Gauteng to a standstill, the contagion was contained—and ultimately neutralized—by the will of the people.

First, they formed human shields around shopping centres. Then they organized themselves into community protection groups, searching vehicles entering their areas, confiscating contraband, and effecting citizens’ arrests. Gradually the momentum shifted, the looting subsided and the instigators, who only days before had been so vocal on social media, suddenly went radio silent.

When President Cyril M. Ramaphosa addressed the nation on Monday night, the looters could be seen concurrently on a little screen on the same broadcast, brazenly stripping a shopping center in central Durban down to its fittings. By the time he spoke four days later on Friday night, he was firmly in control, and he was calling the week for what it was—South Africa’s darkest hour, the closest we have ever come to a civil war, with all the mayhem, anarchy, and racial hatred the doomsayers and cynics had eagerly foretold at the dawn of our democracy twenty-seven years ago.

South Africa is a phenomenal country, complete with paradoxes and contradictions. Its people, not its enviable mineral wealth or natural resources, are its greatest jewels. Many of them have been sorely treated by wave after wave of unfulfilled and often cynical promises of a better life, as the gap between the masses and the empowered elites has metastasized into a massive tumor that threatens the lifeforce of this nation.

We have immense challenges. Many of them remain unresolved after decades of colonialism and decades of apartheid. Most have been worsened by a decade of kleptocracy. But we also have the greatest asset of all—the resilience of a nation which has often threatened to splinter into its constituent parts but to date, thankfully, never has.

In the space of a week, as the violence threatened to rip through the threadbare fabric of our rainbow nation, spread on a cynical quilt of lies, the truth is that the overwhelming majority of this country stood fast, preventing the contagion from spreading to the nation’s seven other provinces.

When calm returned to the two affected provinces, people of all classes, creeds and colors took to the streets once more, this time to clean up the mess on their weekend off. The timing was apt; Sunday, July 18, was Mandela Day, the day we give sixty-seven minutes of service in memory of our founding father, Nelson Mandela, on the day that this year would have been his one hundred and third birthday.

On April 20, 1964, he stood in the dock at the Supreme Court in Pretoria. He was facing the death sentence. This was his closing remark.

During my lifetime I have dedicated myself to this struggle of the African people. I have fought against white domination, and I have fought against black domination. I have cherished the ideal of a democratic and free society in which all persons live together in harmony and with equal opportunities. It is an ideal which I hope to live for and to achieve. But if needs be, it is an ideal for which I am prepared to die.

How fitting that this week people came together to defend one another and defend this dream and then—when the clear and present danger had passed—rolled up their sleeves and swept the streets of the destruction.

This week was an inflection point in the South African story. Mandela and his freedom fighters bequeathed us the blueprint for a future in which South Africa belongs to all who live in it. How fitting too that it was left to one of his most trusted lieutenants, Cyril Ramaphosa, to defend it. It was Ramaphosa who played a memorable role internally in the struggle against apartheid, creating the largest trade union in the country at the time, and then negotiated our peaceful transition before drafting the constitution. This week he made sure that the republic successfully negotiated its greatest existential crisis to date and passed with flying colors, by bringing everyone who has this nation’s best interests on board to isolate this evil and root it out.

Now it is up to us to start the long, and well overdue, process of creating that better life for all, reducing the yawning inequality, creating prosperity, and through that the country that Mandela was prepared to pay the ultimate price to create.

South Africa was deeply shaken this week, rocked to its very core, just as the United States was on January 6 this year. It will take us a long time to recover and to rebuild, but we shall overcome. The spirit of ubuntu that runs through each and every patriotic South African comes to the fore every time our backs are against the wall. That’s when you see the best in us.

It’s incumbent on us now to channel that energy and build something that is as rightfully the amazement and envy of the world as our peaceful transition was twenty-seven years ago.

Ivor Ichikowitz is a Johannesburg-based industrialist and philanthropist. The views expressed are his own.