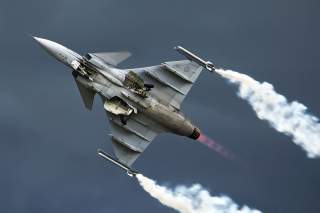 South African Air Force (SAAF) has 19 single-seat JAS-39C Gripen fighters and nine two-seat D-model examples, most of which are operated by 2 Squadron (2 Sqn) at Waterkloof air base.

Noteworthy at least 12 of the aircraft were put into long-term storage in 2013 because of severe budget cuts.

As reported by FlightGlobal the issue was managed to some extent by flying the remaining aircraft harder.

“Every country has its ups and downs and has budget cuts,” Mashaba noted. “We have overcome them and we basically have all our Gripens up and running.”

Mushaba also told attendees that SAAF Gripens are introducing an indigenous datalink called “Link ZA”, which allows data sharing with the nation’s BAE Systems Hawk 120 lead-in fighter trainers. “We ‘Gripenised’ the Hawk,” said Mashaba. “When you are flying the Hawk, you are able to see the Gripens around you. The stepping stone from Gripen to Hawk is actually much easier.”

Furthermore he explained that his unit’s Gripens are tasked with searching for rhinoceros poachers near the Zimbabwe border. The jet uses its Rafael Litening III targeting pod to scan the area at night and direct wildlife rangers to the poachers’ camps.

“They are smart, those guys, they are not stupid, but we find them,” said Mashaba. There are cheaper aircraft to use than Gripens for such an application, he adds, but anti-poaching surveillance is usually combined with other tasks. “And if we do nothing, the rhinos will all be gone,” he conluded.