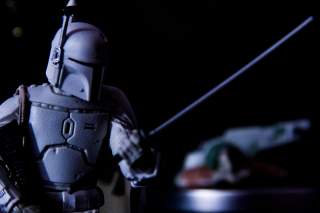 On 25 May, 1977 Star Wars Episode IV: A New Hope opened in movie theatres across America. The now iconic science fiction film has lasted the test of time, spawning two sequels – Episode V: The Empire Strikes Back (1980) and Episode VI: Return of the Jedi (1983) – a prequel trilogy between 1999 and 2005; a sequel trilogy beginning in 2015, and further spin-off movies, too.

Centred around the “long time ago” adventures of an adolescent farmer, a reckless smuggler and a strong-willed princess, the original film starred Mark Hamill as Luke Skywalker, Harrison Ford as Han Solo, and Carrie Fisher as Princess Leia. From the film’s famous opening crawl, we learn “secret plans” to the evil Galactic Empire’s dreaded space station, the Death Star, have been stolen by rebel spies and entrusted to Princess Leia, a leader of the Rebel Alliance, who hopes to use them to “restore freedom to the galaxy”.

I’m not such a bad pilot myself – Luke Skywalker

Like thousands of other 1980s children, I grew up imagining myself in this “galaxy far, far away”, playing with action figures, playsets, and a host of other accessories to recreate the Star Wars scenes in my own bedroom. These must-have toys of the late 1970s and 1980s were the most prized items in my toy box.

As adults, many Generation X-ers like myself have rekindled their love affair with Star Wars, giving rise to a huge collector market for those who hope to access, own and collect the toys they had as children.

I find your lack of faith disturbing – Darth Vader

While the film was a massive hit with moviegoers, most toy companies showed little interest in taking on a Star Wars product license before its release. Collecting modern toys was not the thriving market then that it is today. In the 1970s, movie tie-in merchandise was in its infancy and Twentieth Century Fox, the film studio that produced Star Wars, did not pursue the rights which, by default, fell to Lucas.

Kenner Toys, a small company based in Ohio, eventually took the gamble – though it was unable to ready any toys for Christmas 1977 because of the time required for production. To satisfy unexpected customer demand, Kenner, ignoring marketing advice, created and sold an Early Bird Certificate Package, essentially an “empty box” that contained only a mail-in coupon for the first four action figures – Luke Skywalker (with a rare double-telescoping lightsaber), Princess Leia, Chewbacca and R2 D2. They were shipped when they became available in early 1978, along with stickers and a colourful cardboard stand to display the complete set of the first 12 figures produced.

Where did you dig up that old fossil? – Han Solo

When the plastic action figures hit the shelves of UK shops and newsagents during the late 1970s, they cost about £1.50, a reasonable price for a children’s toy. By the end of 1978, Kenner had sold 42m Star Wars toys. And by the time the last of the 100 original – now commonly referred to as “vintage” – Kenner action figure line was released in 1985, an estimated 250m had been sold.

To this day, the final action figure, Yak Face, who appeared in a few brief scenes in Return of the Jedi, remains highly sought after. Due to dwindling interest in Star Wars toys and falling sales, Yak Face never retailed in the US, and can sell today for several hundred pounds, if in both original packaging and mint-condition.

Don’t you get technical with me! – C-3PO

The holy grail for collectors of vintage Star Wars figures, however, is the Jawa with a tan coloured vinyl cape, a production soon halted in favour of a darker brown cloth cape. In 2013, an example of this rare action figure fetched £10,200 at auction.

In 2015, an immaculate Boba Fett, the feared bounty hunter who appeared first in The Empire Strikes Back, sold for £18,000, the highest price paid to date for a Star Wars action figure.

However, even some loose figures, no longer in their original box and played with, can sell for many times more than their original price, especially rare prototypes or those with uncommon moulding variations or accessories. For some collectors, even the packaging alone, authentic and undamaged, is highly sought-after, and auction valuations and prices continue to rise.

They’ll soon be back, and in greater numbers – Ben (Obi-Wan) Kenobi

The original action figures – and other playthings in the toy line – certainly played an important role in the success of Episode IV. For children of the late 1970s and early 1980s, the adventures of Luke, Han and Leia continued, not through rewatching the movie on videotape or satellite television, but through their toys, and, of course, a little imagination.

As generations of fans come together at events, exhibits and other activities to celebrate the 40th anniversary of the movie, the Star Wars brand remains an important and influential part of contemporary popular culture – it has even become an object of academic study. As that fan base continues to grow, it looks like the Star Wars story will continue to entertain and inspire for many more years to come – whether that is on the big screen, or in the imaginations of youngsters playing in their bedrooms.