How Strategic Ambiguity on Taiwan Benefits the United States 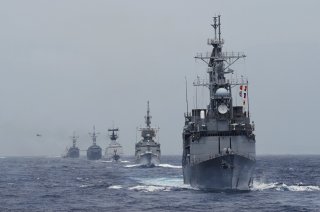 Despite the setback of Covid-19, the economic, political, and military power China has amassed to date has emboldened the Chinese Communist Party (CCP) leadership to not only crush pro-democracy protests in Hong Kong, but to punish Australia economically, confront India militarily, and arbitrarily lock up ethnic Uyghurs, Kazakhs, and Kyrgyz in Xinjiang.

Now that the promises made under the “one country, two systems” proposal to Hongkongers in their return to China have been revealed to be empty, the CCP has turned its focus on the most important piece of Chairman Xi Jinping’s “great rejuvenation of the Chinese nation”—that of “reunifying“ Taiwan, a self-ruled island nation claimed but never ruled by the People’s Republic of China (PRC).

On an almost daily basis over the last several months, China’s People’s Liberation Army Air Force (PLAAF) has flown sorties across the de facto median line of the Taiwan Strait (at levels not seen in thirty years) and into Taiwan’s Air Defense Identification Zone (ADIZ). Politically, the frequency and size of the sorties are calibrated to signal the CCP’s anger whenever Washington publicly shows support for Taiwan, coupled with a face-saving need to convince the Chinese public it is actively pursuing “reunification.” Militarily, the sorties help the People’s Liberation Army (PLA) to gather intelligence on Taiwan’s wartime readiness and the potential U.S. military response, while increasing maintenance and fuel costs (over $1 billion in 2020) for Taiwan’s fighter jets. The CCP is also engaged in psychological warfare, using the daily sorties to wear down both military and civilian morale. Last year, Taipei scrambled its fighter jets over 3,000 times to intercept the incursions—which many analysts consider the most serious threat since the PLA fired ballistic missiles into waters near Taiwan in 1996.

Will the U.S. Come Taiwan’s Defense?

Following President Joe Biden’s inauguration on January 20, how the world’s sole superpower will respond to China’s growing threats to Taiwan is on the minds of many Americans and Taiwanese. Critics in the United States fear “China Joe” will be soft on China, while his critics in Taiwan fear Biden will be far less supportive than Trump—whose administration ushered in the strongest support for Taiwan in decades to help counter the heightened threat levels by the Chinese PLA. In a recent poll, only 35 percent of Taiwanese believe the United States can be trusted to defend Taiwan, though nearly half (48 percent) believe their security depends on the United States.

The United States was obligated by law to defend Taiwan under the 1954 Mutual Defense Treaty, but after the Carter administration formalized diplomatic relations with the PRC in 1979, the treaty was replaced that year with the Taiwan Relations Act (TRA), and subsequently, the “Six Assurances.” Under the TRA, the United States is not required by law to defend Taiwan, but rather provide the necessary “defense articles and defense services” so Taiwan can protect itself. Although there is no requirement to defend Taiwan, the act permits the U.S. president and Congress to determine “appropriate action in response” to “threats to the security or the social or economic system of the people on Taiwan, and any danger to the United States interests arising from such threats.”

Richard Haass and David Sacks recently sparked a debate in foreign policy circles after arguing in a September 2 Foreign Affairs article for an explicit U.S. commitment to respond to any Chinese use of force against Taiwan.

The article follows a remarkable level of recent legislative proposals by U.S. legislators arguing for greater strategic clarity on protecting Taiwan. In June, Senator Josh Hawley introduced the Taiwan Defense Act (TDA), calling to “maintain the ability of the United States Armed Forces to deny a fait accompli by the People’s Republic of China against Taiwan.” In July, Representative Ted Yoho introduced the Taiwan Invasion Prevention Act (TIPA), authorizing the use of armed forces “to defend Taiwan against a direct attack by China’s military, a taking of Taiwan’s territory by China, or a threat that endangers the lives of civilians in Taiwan or members of Taiwan’s military.” And on February 26, Representative Thomas P. Tiffany introduced House Concurrent Resolution 21, with the title “Expressing the sense of Congress that the United States should resume normal diplomatic relations with Taiwan, negotiate a bilateral free trade agreement with Taiwan, and support Taiwan’s membership in international organizations.”

As representatives of the American people, Congress should introduce legislation reflecting the people’s will, while also remaining mindful of the wishes of the Taiwanese people. Would any of the proposed legislation risk leading the Pentagon into another costly war that the American public does not want to fight?

In a poll taken last July by the Chicago Council on Global Affairs, 41 percent of Americans showed support for U.S. military action if Taiwan was attacked—the highest level since the Council first started asking the question in 1982.  Another survey taken last year by the Center for Strategic and International Studies, a U.S.-based think tank, showed the American public willing to take an equivalent level of risk to defend Taiwan as they would for U.S. treaty allies in the region.

The Downsides of Strategic Clarity

The need for strategic clarity argued by Haass and Sacks does have potential drawbacks. Taipei has long drawn criticism for not spending enough on its defense budget and failing to properly train its regular and reserve forces. While President Tsai Ing-wen pledged on October 10, Taiwan’s National Day, “to enhance national defense capabilities,” a full security guarantee from the United States is thought to disincentivize Taipei’s efforts to improve its military readiness.

Strategic clarity could also embolden current pro-independence activists or a future administration in Taipei to push for de jure independence, leading Beijing authorities to conclude the possibilities for a peaceful reunification are completely exhausted and prompting a face-saving military action under its 2005 “Anti-Secession” Law, which no side really wants.

Finally, the problem with drawing redlines is Washington must be willing (and capable) of defending them—or risk a serious loss of confidence from its treaty allies in the region. No matter how much Washington and its citizens are keen to offer more support for Taiwan in the face of a rising China, there may well be certain scenarios under which Washington may choose not to intervene.

For instance, what would Washington’s response be to a minor incident such as the ramming of a Taiwanese Coast Guard boat on Taiwan’s side of the median line by a Chinese sand-dredging boat? Or a Chinese PLAAF fighter jet colliding with a Taiwanese fighter jet in Taiwan’s ADIZ? Would a U.S. security guarantee extend to cyber-attacks on Taiwan’s electricity, water, telecom infrastructure, and how would Washington respond?

Even more seriously, how would the United States respond to a maritime embargo or invasion of one of Taiwan’s islands, such as Taiping, Matsu, or Quemoy (Kinmen) which sits just 2 kilometers off China’s coast? Would the United States defend Taiwan’s Pratas (Dongsha) Islands (some 444 kilometers from Taiwan and 340 kilometers from Hong Kong) which has no permanent residents? Finally, how would Beijing and Washington respond if Taipei declared de jure independence tomorrow?

President Biden is no stranger to the TRA, having argued nearly twenty years ago: “The president should not cede to Taiwan, much less to China, the ability automatically to draw us into a war across the Taiwan Strait.”

Much has changed in the two decades since Biden made those remarks, but the Biden administration appears to be sticking to the status quo of strategic ambiguity over Taiwan. In his Interim National Security Strategic Guidance released on March 3, the administration states “We will support Taiwan, a leading democracy and a critical economic and security partner, in line with longstanding American commitments.”

Unfortunately, Biden’s measured approach to calm the waters by staying the course of strategic ambiguity over Taiwan was not received well in Beijing. Four days later, Chinese Foreign Minister Wang Yi urged Washington to stop “crossing lines and playing with fire” on Taiwan, saying there was “no room for compromise or concessions.” How this latest exchange continues to be played out in the airspace around Taiwan remains to be seen, but no Chinese PLAAF sorties have been reported by Taipei since March 3.

Gary Sands is a Senior Analyst at Wikistrat, a crowdsourced consultancy, and a Director at Highway West Capital Advisors, a venture capital, project finance, and political risk advisory. A former diplomat with the U.S. Overseas Private Investment Corporation, he has contributed a number of op-eds for Al Jazeera, Forbes, U.S. News and World Report, The Diplomat, and the South China Morning Post. After six years in Shanghai and five years in Ho Chi Minh City, he is now based in Taipei, Taiwan.