How Syria Became The Centerpiece Of Russia's Middle East Strategy 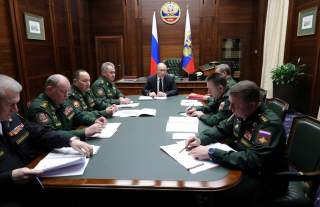 Key point: It's about more than military bases.

International analysis of Russia’s military action in Syria has been mostly focused on the main goals of the campaign. Reporters, politicians, experts and pundits have argued whether Russia is trying to rescue Assad or whether it is fighting ISIS and other terror groups in the area. These debates are often politically significant, but tend to be quite divisive and do not contribute much to understanding the background, broader context or consequences of the Russian operation. It seems that there could be a more promising analytical approach. Experts can spend years studying doctrines of foreign policy and speeches of decision makers, yet remain unable to decipher how the country in question would act in various circumstances. In this regard, Russia’s actions towards Syrian crisis speak volumes, providing significant amount of food for thought for those trying to understand Russian foreign policy.

Whether one thinks that Russia is rescuing Assad, which tends to be the Western perception, or fighting ISIS, several things are very difficult to argue with.

First of all, Syria is considered Russia’s ally in the Middle East: President Assad asked Moscow for help, and Russia has stood by its ally in very difficult circumstances. American pundits and politicians, especially Republicans, during the last month have often mentioned that the Russian military campaign represents Moscow’s return to the Middle East. According to these statements, Moscow has been absent in the area since Anwar Sadat switched Egypt’s loyalty from the Soviet Union to the United States. It is far from the truth.

Further, we must look at the current state of Russia’s relationships in the Middle East. Russia is not returning to the Middle East: Syria was a Soviet ally during the Cold War and so it was very logical for Bashar al-Assad to ask for Russia’s help.

Many observers have argued that the Russian military operation in Syria is a bold challenge to the United States in the region. In this regard, Russia’s decision to stand with its ally is especially important. Obama’s administration abandoned Mubarak, a long-time American ally, yet the Kremlin, in even more complicated circumstances, is helping Assad. This situation gives regional leaders something to think about.

Second, military involvement in Syria is a very serious test for Russia’s ties in the region. Middle Eastern affairs are in a state of constant flux, and grow even more so every year. It is very difficult in this situation to pretend that there are sustainable alliances or long-time friends that an outside power can rely on in the Middle East. To form the coalitions necessary for varied goals and changing crises, one of the most important things for an outside power is the breadth its connections in the region. It is hard not to notice that despite various amounts of criticism and concerns from regional capitals regarding Russia’s operation, Moscow is talking to almost all of them. During the last month, Russia held channels of communication wide open with Egypt, Jordan, Turkey, Kuwait, Saudi Arabia and Israel. Russia’s position on Syria is very close to that of Iran. Iraqi officials also demonstrated a strong interest to cooperate with Russia in fighting with ISIS. One cannot be wrong to suggest that some of these talks are difficult, but their continuation significantly strengthens Russia’s strategic stance in the region. Here we can again compare the Russian and American positions: for example, it is rather hard for Washington to deal with many issues in the region without talking to Tehran—yet the latter is difficult in terms of domestic U.S. politics.

The decision to intervene in Syria allows us to make several conclusions about Russian foreign policy beyond the Middle East. The most important of them is that Moscow is not afraid of making bold decisions. One may argue that the decision to intervene in Syria was too risky, but in the current age of global public scrutiny, information overload and universal political procrastination, in the fast-changing and perplexing environment of the Middle East the Kremlin made a bold choice for action. The jury is still out on what Moscow is trying to achieve and how its decision to intervene in Syria will be executed, but the strategic courage of Russian foreign policy is beyond doubt. And by demonstrating this kind of boldness Moscow, whatever its goals, forces other players in the Middle East to react—whether or not they are ready. Even some American pundits have noticed that Obama’s decision to send fifty U.S. special forces to Syria could be considered a response to Russia’s actions.

Moscow’s courage includes its military capabilities and its readiness to use them. After the collapse of the Soviet Union many domestic and international skeptics doubted that the level of Russia’s military is adequate to its claims to play a bigger role in the world affairs. Not that Russia has used military threats as foreign policy instrument, but from time to time, one could hear critics asking: why exactly Russia should be regarded as a main power?

Today these skeptics have been presented with an answer. If the Caspian Fleet, considered by some as a “backwater navy,” is capable of using cruise missiles to strike targets thousands of miles away, what else Russia could have in store—especially when it is ready to use its military capabilities? Of course, there are enough critics speculating that not all Russian cruise missiles reached their targets. But no military or technology is perfect, and so far nobody can prove how many missiles failed. It is also important to consider that Russia used these missiles, almost routinely, not during an existential battle or a fight for vital national interests, but in a faraway campaign of choice. Again, from this perspective, it seems to be a very serious move.

In general, the Russian military is operating, in many senses, on unfamiliar terrain. Even the 2008 operation in Georgia was close to its borders and fought against a well-known enemy. That has not been the case with Syria, where Russia is conducting a type of campaign lately seen executed only by the United States or under American leadership. Airstrikes from a foreign base, cruise missiles, different types of space and electronic reconnaissance, no land force units involved, drones, close coordination between navy and air force, cooperation with foreign military: these are all signs of an operation typical to modern warfare. Soon, the world will have more evidence by which to judge Russia’s readiness for this type of fight.

The next crucial issue to follow, while analyzing the Syrian intervention’s significance for Russia’s foreign policy, is Moscow’s capability to account for past negative experience, whether its own or that of others. The first thing to note here is a more consistent effort by Russia to make the operation in Syria transparent. The ministry of defense, the foreign ministry and the Kremlin are communicating with their counterparts and the international media, more than anybody familiar with Russian officials could expect.

Considering the chilled relations between the Kremlin and the White House, the September meeting in New York between Putin and Obama seemed more an attempt by the Russian president to explain his country’s position personally than an effort to get American support. Similar reasons might be behind the current consistent consultations with Middle Eastern powers, and invitations by the Russian defense ministry to military attachés in Moscow and Western brass, especially American, to create communication channels to avoid accidents. We also see that the Russian Ministry of Defense opened an information center to provide official information, including videos of strikes, in a timely manner. One can argue the effectiveness of this PR effort, yet it is a big step forward compared to Russia’s actions during the 2008 Georgia campaign, when Moscow sluggishly reacted to Georgia’s moves to win over international sympathies. This time, the Kremlin has even demonstrated efforts to reach to the anti-Assad opposition.

But Russia had even more homework to do before the Syrian operation. It included the lessons of its and other countries’ foreign military campaigns that went wrong. Many observers are now making parallels between Syria and the Soviet invasion in Afghanistan. Obviously, not all comparisons are correct. The terrain, culture and politics of modern Syria and of Afghanistan almost 40 years ago are very different. More importantly, for the Soviet Union, the Afghan war became a full-blown proxy war against the United States, Pakistan and the Gulf states, which provided crucial support to the Afghan opposition. Today the United States is struggling to understand who are “mainstream rebels” and who is in the “democratic opposition” in Syria, not to mention whether to provide the “good guys” with the most sophisticated weapons. Although Syria is not Afghanistan 40 years ago, Russia still has enough to study beyond the Soviet negative experience, or even the doomed American transition in Vietnam—from the bombings to the land campaign.

At this point, it is too early to say if Russia did its “homework”. But as we have shown above, some important facts of Russia’s behavior in the international arena are already obvious during its military campaign in Syria.