This Is How Terrible a War with Iran Could Get 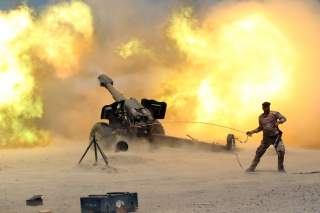 Key point: A war with Iran would be costly to both sides.

Oil tankers have burned on the Persian Gulf, allegedly victims of Iranian attack. An American drone was shot down over Yemen by rebel forces who reportedly have enjoyed some measure of Iranian support. And now Iran is threatening to exceed hard limits placed on its nuclear program.

In the summer of 2019 Iran and the United States are “staggering toward war,” Jim Krane, a fellow at Rice University’s Baker Institute for Public Policy, wrote for Forbes.

And to great degree it’s the fault of U.S. president Donald Trump, who in 2017 withdrew the United States from a 2015 agreement limiting Iran’s nuclear-weapons program.

Four years ago Tehran suspended uranium enrichment in exchange for relief from economic sanctions. Trump reimposed many of those sanctions.

Since then at least six oil tankers have come under attack while sailing near Iran, several of them in recent weeks. The Trump administration blames Tehran for the attacks. But the tanker raids, if Iran indeed is responsible, make sense from an Iranian point of view, Krane wrote.

“It’s looking like Iran had something to do with the reckless attacks on civilian shipping, probably in response to what Tehran unsurprisingly views as U.S. economic warfare.”

Wishful thinking. U.S. hostility has a better chance of doing the exact opposite.

There is no question that Iran abided by the commitments it made in 2015. It opened its nuclear sites to inspection, dismantled most of its centrifuges, handed its uranium stocks to Russia, and even poured concrete into the reactor core that might have given it weapons-grade plutonium.

Trump’s re-imposition of sanctions – despite Iran’s compliance – was a major strategic blunder. It reinvigorated Iranian hardliners, who now have evidence that Washington can only be counted on for one thing: betrayal.

Iranian hardliners are finding a receptive audience for their more worrying message. Until it develops a nuclear weapon like North Korea’s, Iran will be unable to deter a U.S. attack or embargo, or even win the respect of its neighbors.

Sure enough, Iran is expected to announce an increase in its stockpile of uranium above what the 2015 deal allowed.

“Iran’s Atomic Energy Organization said that within days it expects that the country will have produced and kept in its stockpiles more low-enriched uranium — the sort used to fuel power plants — than allowed by the 2015 deal, which the Trump administration withdrew from last year,” The New York Times reported on June 17, 2019.

“The agency also left open the possibility that it might soon begin enriching the uranium to much higher levels of purity, edging it closer to what would be necessary to produce a nuclear weapon.”

“Is there anything the Trump administration can do to prevent a nuclear-armed Iran?” Krane asked.

A better question might be: Is America willing to invade Iran and kill, capture or disarm the Iranians who support a nuclear deterrent, including the 750,000 members of the Iranian Revolutionary Guard and other forces, along with their supporters in government?

Such an invasion and occupation would take decades and make the $2-trillion Iraq war look trivial.

War also could block the Strait of Hormuz, with potentially devastating consequences.

“An interstate war in the Gulf would leave the Strait of Hormuz partially shut,” Krane warned.

It would halt at least four million barrels per day of exports, perhaps double that amount.

The outage could last from a month to a year and a half.

Ravaged oil markets could be worse off than we imagined.

We hadn’t considered that Houthi rebels in Yemen might simultaneously send drones to attack and shut Saudi Arabia’s east-west pipeline, which allows the kingdom to export five million barrels per day via the Red Sea, avoiding the Strait of Hormuz.

There’s still time to avoid a major conflict, Krane wrote. But that would require Iranian and American leaders to “do some stock-taking and get us off the road to war.”