How to Test the Littoral Combat Ship: Sent It Into a 'War' with Iran 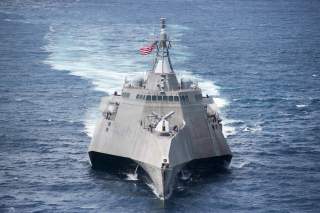 Even though the Marine Corps Littoral Operations in a Contested Environment of necessity focuses on future battles, it does have historical applicability. Conceptually, the 1942-43 Battle of Guadalcanal was a littoral operation in a contested environment, clearly having seaward, landward, and aerial dimensions. While not having anything like today's cyberspace, electronic intercepts did play a significant role. Finally, newly installed radars on American warships did exploit the electromagnetic spectrum.

While one can characterize the 1942-43 Guadalcanal littoral as a 'contested environment,' such a description fails to adequately describe the savage fighting between America, its Allies, and Japan. Both sides took, for an extended period, severe human and material losses. Both sides committed their most technologically advanced warships and planes. Both sides employed the era's most destructive weapons including 14 and 16-inch naval rifles, type 93 torpedoes with 1,080 pounds of explosives in their warheads, and aerial bombs capable of wrecking the largest and most modern warships.

Will future littoral operations in a contested environment be any less savage?

Suppose the Islamic State of Iran fortified its territory adjacent to the Straits of Hormuz with large numbers of anti-ship cruise missiles, surface-to-air missiles, radars, and sophisticated fire control systems. Additionally, suppose that the Iranians positioned numerous sea mines and their current fleet of 23 Ghadir-class midget submarines close to the Straits of Hormuz. Then, after completing its preparations, at a propitious time, Teheran announced that Iran is now supervising the Straits of Hormuz and will control who can and cannot transit that waterway.

Further suppose that despite diplomatic entreaties, the Iranian regime chooses not to restore freedom of navigation to the Straits of Hormuz.

Other than the United States, which power, using non-nuclear means, could compel the Iranians militarily to alter their stance?

Now assume that the United States decides to undertake the military operations required to restore freedom of navigation to an Iranian-blocked Straits of Hormuz. How might America conduct such a littoral operation in that contested environment?

The Navy could employ, among other options, its fleet of littoral combat ships, which will eventually number 35 vessels, to clear mines, hunt midget submarines in the shallow waters of the Straits, and battle swarms of small, armed Iranian boats. These essential tasks are precisely what the Navy intended both the Freedom and Independence-class ships to do.

If the United States and Iran actually fought the suggested hypothetical battle for the Straits of Hormuz, would the ensuing fighting, featuring large numbers of deadly accurate missiles, mines, and torpedoes, approach in savagery what occurred in the Guadalcanal littoral in 1942-43? Will the LCS ships prevail in a most contested environment? Will they suffer only tolerable losses?

The LCS program has endured continuing criticism centering on lethality and survivability issues. Since the LCS ships have seldom deployed and have never experienced combat, the validity of such critiques remains unsubstantiated.

Those individuals or organizations who have a financial, organizational, or reputational stake in a project constitute an 'insider' community. In the absence of real-world experience with the LCS ships and their design, does 'insider' behavior and actions provide useful insights?

The Israeli government explored purchasing American littoral combat ships. If they had contracted for such vessels, the US government would have helped fund the Israeli purchases, thus saving Israel from having to pay, with hard currency, a foreign builder. Eventually, Israel chose to forego American financial assistance and, instead, purchased a German design.

No other nation has committed to buy American littoral combat ship designs.

On 24 February 2014, Secretary of Defense Chuck Hagel directed the Navy to investigate replacing planned, but yet to be purchased, littoral combat ships with a new design, the Small Surface Combatant.

On 16 December 2015, Hagel's replacement, Secretary of Defense Ashton Carter, nixed the Small Surface Combatant effort, replacing it with the FFG(X) program and cut the LCS procurement from 52 to 32 ships.

Unhappy with the slow, costly progress on the LCS mission modules, the Senate and House Armed Service Committees have reduced funding for these programs. The Committees did, however, add monies for three additional Independence-class ships to provide financial support for the shipbuilding yards.

The Navy has found manning the littoral combat ships extremely challenging, with only 31 percent of the sailors assigned having achieved their primary Navy Enlisted Classification. The Navy has stated:

… unlike other ships, there is almost no redundancy within LCS crews, and the unplanned loss of even a single crew member may result in major mission degradation."

Additionally, the Navy believes it needs:

which implies that the loss of a few sailors could render an LCS unable to perform its mission. The preceding observations suggest the Navy has, de facto, recognized that the proper manning of an LCS ship is an unobtainable goal.

The Lockheed Martin Corporation—prime contractor for the Freedom-class ships—no longer bids, as a prime, on either new LCS or FFG(X) ship contracts.

Considering all the 'insiders' who have cut or reduced their support for the Navy's LCS effort, it is hard not to conclude that numerous 'insiders':

Such a de facto abandonment will likely prevent the Navy—lacking industry support, needing substantial new appropriations, and absent Department of Defense backing—from doing much to alter the implemented design of either the Freedom or Independence-class ships. For better or worse, the built and now under construction littoral combat ships will go into action with today's capabilities and uncorrected flaws.

Whatever the 'insiders' may or may not do, the Navy and the United States still must prepare to conduct successful littoral operations in a contested environment. Given the status and attributes of our littoral combat ships, what should the Navy and the nation expect?

… against a red team that replicates the capabilities and tactics likely to be employed by adversaries in the littorals. By putting our concepts, doctrine, organizations, tactics, and capabilities to the test under stressful conditions, we will learn what works and what doesn't. We will determine how to integrate new technology and how to coordinate actions in all dimensions and warfare specialties.

The section later states, without equivocation, that such an exercise:

… is not a novel idea; it is the method used by the fleet and fleet Marine force commanders during the interwar period that generated victory in World War II.

Following the lead of the Littoral Operations in a Contested Environment concept document's Force on Force Littoral Exercises section, the Navy should consider an exercise that would simulate an American military and naval response to an Iranian seizure of the Straits of Hormuz. Such an exercise would provide a realistic demonstration of:

A final observation: the Navy should recognize that the many severe public criticisms of the littoral combat ship program and the ships it has produced speak to a larger, unstated question: Can the Navy, in the 21st century, successfully manage warship design and shipbuilding? In this regard, the Navy needs to respond to negative LCS assessments with more than glowing statements by senior personnel. Instead, the Navy would do well to demonstrate, via a realistic, demanding exercise, that both the Freedom and Independence-class warships can fight and prevail.