How to Truly Project Power with the F-35 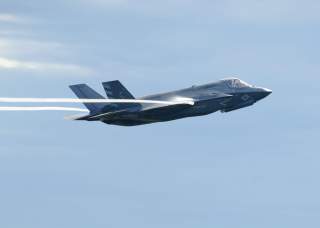 Key point: The F-35 needs to be able to cover vast amounts of space in order get to where it is needed during a crisis.

I argued in parts 1 and 2 that ultimately it doesn’t really matter how many F-35s and aerial refuelling tankers Australia buys; there are hard limits on how far we can project and sustain airpower based on operating from Australian airbases. If Australia is willing to invest heavily in more enablers like the KC-30A tanker, we could probably project airpower out to around 1,500 kilometres from one mainland base, but we probably couldn’t sustain a presence much beyond 1,000 km. And, due to the number of aircraft the Royal Australian Air Force possesses, we could likely only do it in one place at a time.

If you’re a member of the school of strategic thought that believes the Australian Defence Force should be operating beyond our continent itself and out in the region, then this analysis shows how difficult it would be to provide air support for a deployed task force, for either air defence or close air support for troops engaged on the ground.

What this means is that if the RAAF devoted its entire effort to the task, deployed forces could hope for two F-35As providing sustained combat air patrols over Timor-Leste or mainland Papua New Guinea.

Sustaining airpower over Christmas Island (around 1,600 km from the nearest airbase) would be challenging, as it would over a near neighbour such as New Caledonia (1,500 km) or the planned joint naval base on Manus Island (1,300 km). Sustaining any presence over key chokepoints such as the Sunda Strait (1,900 km) is probably not achievable.

Certainly, the task becomes easier if the commander is willing to accept more risk and if it’s decided that air support doesn’t have to continuous. But that means it may not be there when needed. And reaching relatively near neighbours like Fiji (2,700 km) can’t be done at all from mainland Australia.

Those who subscribe to the ‘defence of Australia’ school of strategic thought might argue that these scenarios are irrelevant because we shouldn’t be deploying task forces, particularly amphibious ones, in the first place. They would say our key missions will be either air defence of key mainland sites or strikes on bases our adversary is trying to establish in our near region or on maritime forces approaching Australia. They’d argue that with situational awareness and accurate predictions of the enemy’s movements, we should be able to fly missions only when we need to or at times of our choosing, and therefore we don’t need to keep aircraft constantly in the air a long way from their bases.

However, the problem with waiting behind a moat on the mainland was highlighted recently by Richard Dunley: ‘For the [defensive sea denial] strategy to work, the denying force needs to be stronger than its enemy everywhere (within the region of operations) all of the time. It’s no good being able to defend half of your coastline, or to do so whenever your forces are deployable.’

As explained in part 1, flying from mainland airbases to defend Australian cities, key infrastructure or potential enemy landing zones could still require ranges of well over 1,000 km. Because of the size of our continent, conducting operations within Australia is essentially a form of expeditionary warfare that could require the same enablers as projecting power from Australia. From a pilot’s perspective, the Australian mainland is no different from the South Pacific—airbases are simply tiny islands in a vast brown continent rather than a blue one. And, theoretically, you’d need to defend all of it all of the time. That means providing for the defence of Australia is at least as big a resource problem as the scenario outlined in part 2.

If, however, we see the defence of Australia as essentially an anti-access/area-denial task aimed at striking the enemy as far from Australia as possible, the problem is somewhat different.

Conducting strike missions allows the commander to prioritise range over endurance. If the commander is willing to take some risk (it is the defence of the homeland after all) and has a lot of tankers, they could push the range of the strike package out to 1,500 km. A future F-35A-launched strike missile could potentially add around 500 km to that range, making the strike radius ring pretty big (see Figure 1). It includes most of the island chain to our northeast and key choke points through the archipelago to our northwest.

But even in this role, the F-35A itself is just the tip of the iceberg. The RAAF can assemble a potent strike force including Wedgetail early-warning aircraft for battlespace awareness and Growlers to jam enemy air-defence radars—and will soon have Peregrine aircraft to map the electronic warfare landscape. But all of those assets are limited in number, so we could probably only conduct that task in one place at one time.

The most important element of a fifth-generation air force is highly capable intelligence, surveillance and reconnaissance assets. For Australia that means the yet-to-be-deployed Triton long-range drones, the Jindalee over-the-horizon radar network, and space-based capabilities to locate the enemy far from our shores, as well as the ‘hidden’ targeting infrastructure necessary to support long-range strike capabilities.

Such a capability would complicate an adversary’s plans to establish forward operating bases or to conduct operations directly against Australia. That means they’ll be doing everything possible to strike our airbases before our aircraft take off. Granted, if an adversary was using fighters, they would themselves face the same challenges we’ve been looking at. But a major power would have a lot of other assets at its disposal, such as bombers, medium-range ballistic missiles, and submarine-launched cruise missiles, all of which outrange the F-35A. So, building a resilient strike system around that jet still requires the rest of the iceberg outlined in part 2, including ground-based air defence and redundant fuel storage.

The starting point of this series was the concern that we will not be able to rely as heavily on US military power in the future and consequently we will need to be more self-reliant in some contingencies. Using the example of air combat power, this series has argued that greater self-reliance requires not simply additional F-35As but a broad range of expensive enabling capabilities. Even then there are critical points of failure.

Even if one assesses that a self-reliant defence-of-Australia scenario is an extremely remote possibility in any credible future and that the most likely task for the ADF is to continue to deploy in US-led coalitions, the problem of limited fighter range in the vast Indo-Pacific is a pervasive one. There’s also the challenge that the US itself is grappling with of how to operate in the western Pacific when its fighters are substantially outranged by Chinese missiles. That means the issues raised here are relevant not just for a defence-of-Australia situation. Virtually any operations in the Indo-Pacific will face the same challenges.

In future pieces, I’ll look at the benefits and risks of other options to extend Australia’s combat power, ranging from overseas bases to submarines, cyber capabilities and strategic bombers.