How Trump's Washington Got Venezuela And Maduro All Wrong 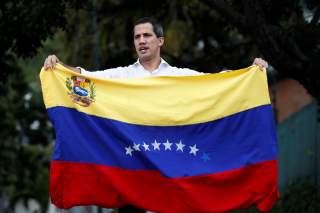 When Washington recognized Juan Guaido as Venezuela’s rightful president, Trump administration officials clearly hoped that incumbent Nicolas Maduro’s grip on power would not last long. There were reasons for such optimism. The socialist regime’s corruption and grotesque economic mismanagement had reached crisis levels. Maduro and his predecessor, Hugo Chavez, had transformed Venezuela from one of Latin America’s most prosperous countries into a poverty-stricken horror marked by runaway inflation and severe shortages even of the most basic consumer necessities. Venezuela was the latest exhibit in the museum of socialist calamities. Maduro’s popularity had plunged, and his implementation of ever more autocratic measures to suppress opponents did not help his situation.

The Trump administration’s efforts to get other nations in the Hemisphere to recognize Guaido seemed to be paying off as well. Most governments followed Washington’s lead and rejected Maduro. There were only a few exceptions. Not surprisingly, the Hemisphere’s other radical leftist regimes (those in Cuba and Nicaragua) expressed solidarity with Maduro. And Mexico adopted a position of uneasy neutrality, trying to avoid taking sides in Venezuela’s domestic political feud. On the whole, though, Washington’s diplomatic offensive succeeded in lining-up support for Guaido, not only in the Western Hemisphere, but in Europe and other regions as well.

However, the anticipated collapse of the Maduro regime has yet to occur. Despite massive opposition demonstrations and pervasive discontent with the domestic economy, his grip on power remains surprisingly strong. Most crucially, Venezuela’s military has remained loyal to Maduro, despite U.S. pressure to switch allegiance to Guaido. In addition, both Russia and China have voiced support for Maduro and provided some financial assistance. Moscow has gone further, dispatching two nuclear-capable bombers to Venezuela along with more than one hundred military technicians to help restore the country’s air-defense missile system.

An increasingly annoyed and uneasy U.S. government has tightened already onerous economic restrictions on Venezuela. U.S. officials appear worried that Guaido’s bid for power is faltering—a concern that is well-founded. Washington took a bold stance in recognizing him as president, even though he and his backers controlled no meaningful territory. That move may turn out to be another example of a U.S. foreign-policy initiative based on little more than wishful thinking.

It wouldn’t be the first time that U.S. leaders assumed that a foreign client had far more domestic backing than proved to be the case. During the 1980s and early 1990s, the administrations of Ronald Reagan and George H. W. Bush backed Angolan insurgent leader Jonas Savimbi, who also had a wildly enthusiastic following among “movement conservatives” in the United States. Not only did Savimbi turn out to be a ruthless psychopath instead of a pro-democracy freedom fighter, he ultimately failed to achieve his objective to unseat Angola’s incumbent government.

An even more embarrassing episode for U.S. policymakers occurred during George W. Bush’s administration. During the prelude to the Iraq War to unseat Saddam Hussein, Washington forged a close relationship with Ahmed Chalabi and his Iraqi National Congress (INC). Chalabi and the INC were a crucial source of bogus intelligence information about Saddam’s nonexistent arsenal of weapons of mass destruction (WMD). Bush administration officials and their conservative allies lauded Chalabi in the most effusive terms, terming him the George Washington of Iraq and a “superstar” akin to Michael Jordan. Undersecretary of Defense Douglas Feith reportedly wanted the U.S. military command simply to appoint Chalabi as Iraq’s interim leader following the U.S.-led invasion.

Not only did Chalabi’s intelligence about Saddam’s WMD arsenal prove entirely erroneous, but his popularity in Iraq was equally fictional. When the country’s first parliamentary elections were held in 2005, Chalabi’s party received a paltry 0.5 percent of the vote and failed to win a single seat in parliament.

U.S. officials appear to have made a similar miscalculation with respect to Ukraine’s political affairs. When Barack Obama’s administration supported demonstrators who were intent on unseating the country’s pro-Russian, but duly elected president, Viktor Yanukovych, one opposition figure was the particular darling of U.S. officials: Arseniy Yatsenyuk. In the infamous intercepted telephone call between Assistant Secretary of State Victoria Nuland and U.S. Ambassador to Ukraine Geoffrey Pyatt about Washington’s choices for leaders of a post–Yanukovych government, Nuland made that point emphatically. “Yats the guy!” she gushed.

There was just one problem. Although thanks to U.S. prodding, the victorious insurgents chose Yatsenyuk as interim prime minister, he could not prevail in post–revolution elections. Oligarch Petro Poroshenko quickly eclipsed him, and Yatsenyuk became Poroshenko’s decidedly junior partner in the new government as prime minister. It soon became clear that he had modest—and declining—influence even in that post, and he ultimately resigned.

Washington has not fared much better with its decision to transfer U.S. support to Poroshenko. His recent re-election bid failed in an especially spectacular fashion. In the election held on April 21, 2019, Poroshenko lost to a political novice, the country’s leading comedian, Volodymyr Zelensky, in a landslide.

Such fiascos confirm that U.S. officials have a habit of grossly overestimating the popularity and political viability of favorite clients in foreign countries. The failure of Guaido to unseat Maduro despite extensive U.S. and other international support suggests that Venezuela may be another case of wishful thinking. Instead of escalating its meddling, the Trump administration needs to take a step back. Washington was not egregiously out-of-line with its initial decision to recognize Guaido’s claim. He did have the backing of the National Assembly, and it was hardly improbable that the incompetent, unpopular Maduro government might fall quickly.

But Maduro’s departure from office now appears uncertain. It is not proper for the United States to interfere further in the internal affairs of another country. Intensifying economic sanctions would be a cruel form of meddling, inflicting additional pain on helpless civilians. Resorting to military intervention would be even more outrageous.

No reasonable person should shed tears if the Maduro regime ends up on the ash heap of history. And it is certainly appropriate for the Trump administration to make it emphatically clear to Moscow and Beijing that their meddling on behalf of Maduro is unacceptable and will negatively affect Washington’s relations with both countries. Anything else, though, should be left up to the people of Venezuela. If they truly wish to rid themselves of Maduro’s corrupt, autocratic rule, then they need to take the required action. Washington has already pushed the envelope of appropriate outside support for Guaido to the limit.

Ted Galen Carpenter, a senior fellow in security studies at the Cato Institute and a contributing editor at the National Interest, is the author of twelve books and more than eight hundred articles on international affairs. His latest book is Gullible Superpower: U.S. Support for Bogus Foreign Democratic Movements. This article first appeared earlier this year.