How to Turn a B-52 Bomber Into a Dogfighter 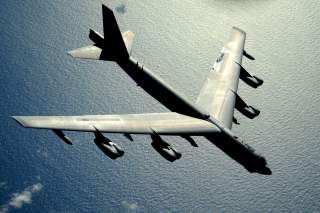 The BUFF MiG kills during the Vietnam War.

The Boeing B-52 is the ultimate embodiment of the principle of strategic air power: developed to carry a hydrogen bomb over intercontinental ranges, the Stratofortress was used extensively for conventional bombing in the Vietnam War, where it was able to become also a MiG killer, shooting down two MiG-21 fighters.

The MiG kills were both scored during Operation Linebacker II, the Christmas strategic air offensive against the industrial and logistical heart of North Vietnam, that started after the failure of the negotiations at the peace talks in Paris. It was during this air campaign that two B-52D tail gunners belonging to the 307th Strategic Bomb Wing from U-Tapao RTAFB (Royal Thailand Air Force Base), Thailand, continued the long tradition of tail gunners from previous wars, downing two North Vietnamese Fishbeds.

These achievements were possible thanks to the four .50-caliber M3 machine guns mounted in the rear of the D variant of the Stratofortress, which they probably made of the B-52 the last strategic bomber to shoot down an enemy fighter. Armed with 600 rounds and operated by the A-3A fire control system search and tracking radar, the guns were controlled either by a tail gunner or by remote control from the gunner’s position in the forward fuselage.

The first of the two MiG kills was scored on Dec. 18, 1972 when 129 bombers (42 B-52Ds from U-Tapao followed by other 87 BUFFs between B-52Ds and B-52Gs from Andersen Air Force Base on Guam) were launched to hit rail yards and logistical facilities in and around Hanoi, as well as the MiGs bases at Kep, Hoa Loc and Phuc Yen. According to Bill Yenne book B-52 Stratofortress: The Story of the BUFF from Drawing Board to the Skies over Afghanistan, the bombers operated in three aircraft cells for reciprocal ECM (Electronic Counter Measures) protection. Among the bombers there was also the B-52D Tail No. 56-0676, callsign Brown III, with Ssgt. Samuel O. Turner as tail gunner. During the bomb run to the target, many SAMs (Surface to Air Missiles) were fired and anti-aircraft fire of all calibers exploded near Brown III.

The B-52Ds reached their target, dropped their bombs and while they were heading home, several MiGs took off to intercept them. One of the MiG-21s was preparing to launch its missiles against Brown III, but Turner was able to lock on to the approaching Fishbed and once it was in the firing range, he opened fire against it, hitting the rear of the MiG which exploded in a huge fireball. This kill was the first for a bomber crew since the Korean War and it had been confirmed also by MSgt. Lewis E. Le Blanc who was tail gunner on another B-52, as explained by Donald J. McCarthy, Jr. in his book MiG Killers A Chronology of U.S. Air Victories in Vietnam 1965-1973.

Today the B-52D tail number 55-0676 is preserved at the Fairchild AFB Heritage Park at Spokane where it can be seen sporting the classic MiG Killers emblem, in the form of a red star under the cockpit.

The second Stratofortress aerial victory during the Vietnam War took place on Dec. 24, 1972, Christmas Eve. Thirty BUFFs which took off from U-Tapao had to hit rail yards at Thai Nguyen and Kep, 40 miles north and northeast of Hanoi and during the bomb run, the B-52s were attacked by the MiGs. One of them was acquired on the radar scope by A1C Albert E. Moore, the tail gunner of the B-52D Tail No. 55-0083, Diamond Lil. He locked on to the Fishbed at 4,000 yards and began to fire against the blip on his radar scope until it disappeared.

According to an extensive piece written by Tom Docherty and appeared in the December 2015 issue of FlyPast magazine, in his combat report Moore wrote: “I observed a target on my radar scope 8 o’clock low at 8 miles. I immediately notified the crew, and the ‘bogey’ started closing rapidly. It stabilised at 4,000 yards, 6 o’clock. I called the pilot for evasive action and the EWO for chaff and flares. When the target go to 2,000 yards, I notified the crew that I was firing. I fired at the bandit until it ballooned to three times in intensity then suddenly disappeared from my radar scope at approximately 1,200 yards. I expected 800 rounds in three bursts.”

This kill too was confirmed by another tail gunner, TSgt. Clarence W. Chute, who reported: “I went visual and saw the ‘bandit’ on fire and falling away. Several pieces of the aircraft exploded, and the fireball disappeared in the undercast.”

Also the B-52D tail number 55-00083 has been preserved and it can be seen on display at the United States Air Force Academy, Colorado.

On Sep. 16, 1991 General George L. Butler, then Strategic Air Command (SAC) commander, announced the elimination of the gunner position and the deactivation of the guns on the B-52. As a former B-52 gunner and a reader of The Aviation Geek Club explained us “we (Gunners) were done away with for two reasons 1) Budget. It was very expensive to maintain the Fire Control System. It was the ONLY system on the jet that had never been updated. It still used vacuum tubes! If a part broke and couldn’t be located, it had to be made. This was very expensive. And 2) Missile technology had become advanced enough to shoot aircraft down from beyond visual range. The guns were obsolete, unless a fighter was dumb enough to try and get close enough to use its guns on the BUFF. Those are the facts.”

Since then a generation has passed since the BUFF had a tail gunner and gone are the days when a fighter had to watch its steps when trying to get behind the B-52.